Napier washout: Cricket can be the most frustrating game on the planet

Standing in the middle of Napier’s cricket ground on Thursday night, all I could think was that for a slow game, cricket still has an incredible ability to test your bloody patience.

The more ardent the supporter, the more the game seems to take advantage. Prepared to wait an hour? Well, how about four? Stringing things out to the point that Buddha would have started drumming the hurry-up rhythm on his tree trunk.

Two days ago in Napier, New Zealand, it rained. Not hard. Through some of the night and some of the morning. A one-day game against Australia was supposed to start at 2pm. The rain had stopped by then, and you expected a delay for cleaning up, then away we would go.

Except away we didn’t. Groundsmen took off covers and put in stumps, but umpires kept making inspections; SpongeBob SquareCart kept driving around in circles. I kept filling hours of chat in the Radio Sport New Zealand commentary booth about the Big Bash and the India tour and the fine products of various sponsors.

It was an exciting time to be alive.

Finally, by 4pm, there was an announcement that the toss would take place at 4:15, play would start at 4:45, and 37 overs would be bowled per side. Nice and simple. Hurrah.

Except 15 minutes later, that had changed to a 4:45 inspection and no promise of play.

They had complained to the umpires that there were wet patches in the outfield, and the umpires had presumably said “Oh yes, of course, you’re quite right, we didn’t think about that when we inspected the field all of five minutes ago and deemed it fit for play.”

Now sure, this whole fiasco could have been headed off if one bright day someone had headed to a hardware joint to sink a couple of grand into plastic sheeting to cover the ground. As my gran always said, what’s good enough for Pallekele is good enough for Napier.

You’d even think that might have been on the agenda, after other washouts at the same ground in the last couple of years. Of course, humans learn from our mistakes, that’s why things are going so swimmingly in the White House.

But even if we accept that McLean Park is run by eternal optimists, who will permit nary a theoretical cloud to shade their perpetually sunny outlook, the eventual abandonment of play without bowling a ball was an absolute joke.

You could tell from the body language of the umpires and the two captains, on their occasional journeys to the centre of the field, that they had no interest in getting play going. Some level of concern had manifested so potently as to be unshakeable.

And yet they wouldn’t do the crowd the courtesy of calling the game off. 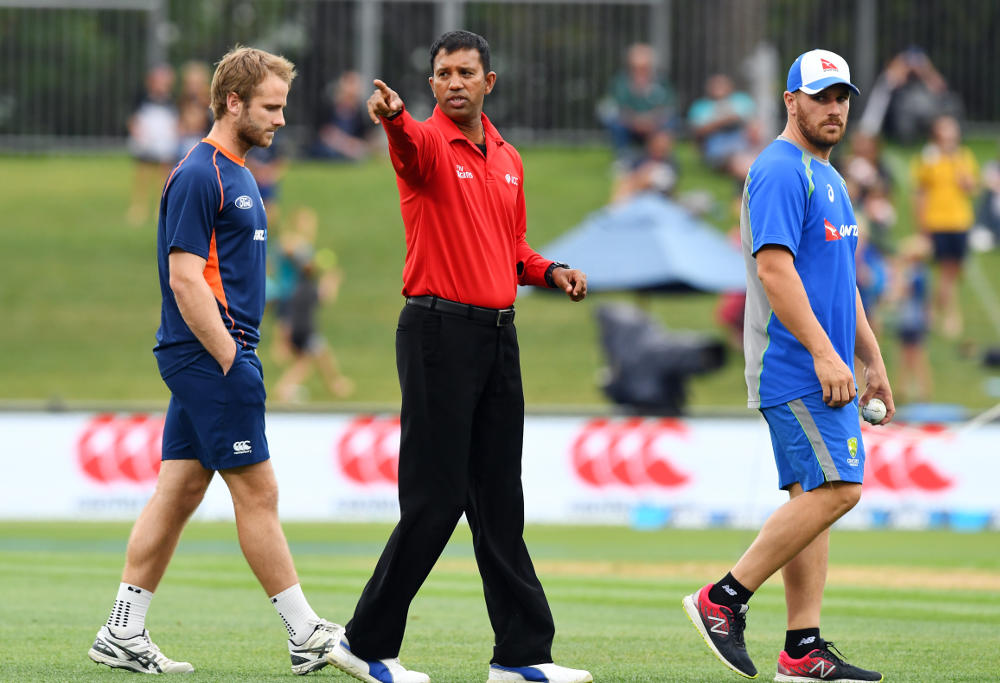 The latest that play was allowed to start in a shortened ODI was 7:15, requiring an inspection at 6:30. The umpires walked out to cover, glanced left and right for all of eight seconds, then walked back off. It could not have been any more token.

Instead, it was about appearances. Needing to be seen to have waited, and to claim they had given it every chance. Even though a humid, still, overcast day would have required a very specific miracle at a time when divine attention is more sorely needed elsewhere.

Spectators who had been there since midday waited until nearly 7pm to be told what those in charge had known for hours – that the game was cancelled. It was a pantomime by officials happy to inconvenience literally thousands of other people just to cover themselves.

Afterwards, stand-in Australian captain Aaron Finch tried to convince us that the surface was dangerous. There was water! It came up through the grass! The training equipment got wet!

But I wandered around the same turf after the abandonment, and… well, let’s just say I’ll never offer to pay Finch for pitch and weather reports.

Yes, it was a bit damp. There were a soft spots. That was it. After the gravel and rock of Australian suburban grounds, this was an inviting futon mattress. Just what were these terrible dangers that lurked beneath its placid surface?

Bryan Waddle has watched decades of cricket, and had no hesitation calling the ground playable. Legendary all-rounder Jeremey Coney went way beyond that – the video report of him going off his head is a tour de force of frustration.

The most confusing part lies with the players. A couple of weeks ago, Finch was dumped from the ODI team. Now fate had suddenly made him its captain. Why wouldn’t he be desperate to notch another game in charge?

And the others? Marcus Stoinis had just played the innings of his life, surely he would have been busting to follow that up. Sam Heazlett was the most unexpected pick in cricket. Peter Handscomb had a chance with bat and gloves.

Guess who’s not here? David Warner, who’s made nine tons in 15 innings. Steve Smith, one of the best in the world. Usman Khawaja, who could yet be. It’s a handy time for the next level to stake a spot. Rather than, say, Glenn Maxwell missing Shield cricket again so he can not play for Australia.

All that aside, the most important participants should have been the spectators. As usual, they were considered last. Sure, uniforms would have got muddy. Players would have to adjust. They might slip a bit, or have to cut out the foot-first slide, or let through a couple of boundaries they might otherwise stop.

But so what? The pitch was fine, the bowling run-ups were fine. Cricketers around the world play in shocking conditions. So adjust. Make the best of it. You’re in town to put on a show, pull back the curtain.

All it needed was umpires to enforce it. Give a start time and not hear any more about it. Except right now, umpires are subservient to players. Umpires worry about consequences. What if they order play, then someone rolls an ankle?

Fair enough, arse-covering is a natural impulse. That’s why umpires need explicit ICC backing to apply an urgency to the game going on as quickly as possible, in all possible circumstances.

Conditions aren’t perfect when it’s 45 degrees or 12 degrees or there’s a gale blowing across the ground. Players adapt. There’s nothing in the regulations about the quality of play needing to be perfect.

The crowd waiting seven hours at McLean Park would have loved to see anything. Twenty overs a side, mud on the knees, slipping and sliding, whatever the standard. Instead, they got a middle finger and a thanks-for-coming – and they didn’t even get that in a timely fashion.

Far from the first time and inevitably not the last, this was the game and its practitioners treating those who pay their wages with contempt. No matter how many tarpaulins a groundsman owns, this attitude has to change.