Crowds, community and a concert-feel at AFL Women's

The bloke who cuts my hair also cuts Patrick Cripps’ hair. Cripps had just come in for a trim two days before.

My barber (OK, hairstylist) tells me Cripps has apparently grown taller this off-season. If all Carlton eyewitness accounts are to be believed, Patrick Cripps is five metres tall, winged and walks around with a fiery blue aura.

Supporters tell me he has made numerous real-estate investments, all in the Carlton area. All his long-term girlfriends live in Melbourne. He can and will never leave.

Yet rumours in the press suggest Patrick Cripps might go home to Fremantle. We cannot lose him. He is the unique Venn diagram of someone who reads stoppages like a scientist and someone with the body mass of five scientists. But if my beautiful Cripps leaves, he will be dead to me.

Even if he develops an accurate kick and wins Brownlows at Fremantle, his faded photo in my wallet will mean nothing. If he wears purple, he will mean even less than Liam Jones. I don’t make the rules. Football is tribal nonsense.

I think about this on the way to the first AFL Women’s game. The old rivals Carlton and Collingwood were at it again, despite the Women’s sides meeting each other for the first time.

The game was scheduled at Carlton’s former home, defunct since 2005. Parents and tiny children played kick-to-kick outside the ground. Blues and Pies jumpers shuffled up Royal Parade.

It had all the required semiotics of the old rivalry. I had Uber-ed to the game in a DeLorean.

I had never seen a women’s game live before, but I was casually aware of the main characters. 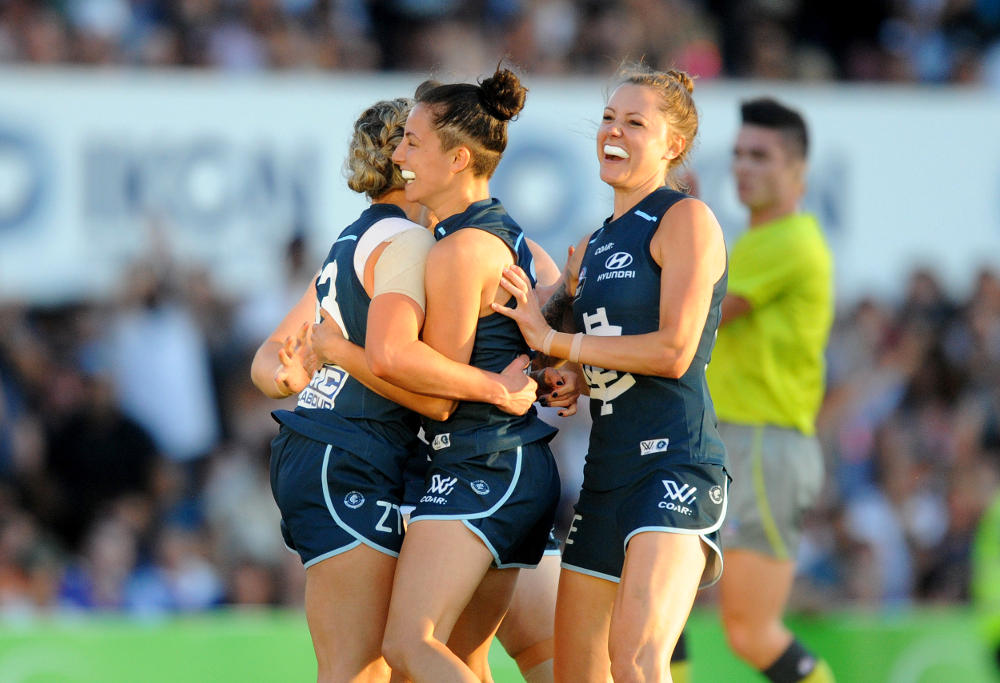 Collingwood has Moana Hope, a highly-skilled Collingwood forward covered in tattoos – a redundant sentence. When announced as a Collingwood marquee player, Hope performed a duet of dabs on stage with Gil McLachlan.

I can’t think of anyone more worthy of hate. If Hope had been drafted by Carlton, I would have performed the necessary mental gymnastics to love her as a Blue. I would however, have nothing for the dab.

Carlton has Darcy Vescio, a half-Asian player. This was exciting. It was the closest approximation to playing for Carlton myself.

Vescio’s debut is the most exciting moment for Carlton-Asian relations since Lin Jong rejected Collingwood’s offer this off-season.

It’s a ten-minute queue to get into Ikon Park, which leads to another fifteen-minute shuffle to my chosen seat. I would later learn that a crowd of twenty-four thousand are somehow present at the twenty-thousand capacity venue.

A further thousand supporters would be locked out due to safety restrictions. Inside, the vibe is young and animated. I spot an Instagram model or two. It felt like a Taylor Swift concert, only I wasn’t embarrassed.

After a quick Collingwood goal, Carlton quickly wrest control of the game. I have no idea whether this is expected.

I realise, without the benefit of exposed form, no one does. With the exception of marquee signings, all players are making their debut to the football consciousness. Every mark could be spilled. Every disposal unpredictable. Every kick for goal is a thriller.

On Friday night, twenty-four thousand vocal supporters rode a new rollercoaster together. I will never experience a round of football like this again.

The marquee signings have a mixed night. Moana Hope doesn’t ruin my Friday night like I expect all Collingwood forwards to do. Darcy Vescio is quick, instinctive and accurate. She kicks four goals by maintaining a frenetic presence in the forward arc.

Something always happens when Vescio has the ball. It was as though Eddie Betts and I get into the machine from The Fly together, but Eddie kicks me out at the last second. She’s that good.

The supporters are another highlight. They cheer every skilled chain of handballs, every contested mark, applaud every accurate kick. Friends I come with are interstate travellers.

They make plans to see another women’s game the next day.

The siren sounds, Carlton win by just under six goals. The last time I see Carlton fans this excited, Chris Judd’s ACL was in his knee, not in medical landfill.

For someone who covers football like a re-capper covers The Bachelor, I am satisfied. The supporters are engaged. The narratives are churning. Carlton finally has an electric small forward again.

A charismatic Collingwood star is given a chance at redemption next week. I can’t wait for the next Blues-Pies game, regardless of gender. Football can be amazing tribal nonsense.