What happens if Matthew Wade struggles in India?

Australia has chosen three specialist pace bowlers for the tour of India.

The selectors have deemed Mitchell Starc, Josh Hazlewood and Jackson Bird are the men to get the job done.

They have also said they will review the situation half-way through the series.

It is a concession that has not often been made for overseas tours.

Traditionally, changes to touring parties have been predicated on injuries rather than workload or form.

The opening Test of the four-match series in Pune runs from 23-28 February with the second to be staged in Bangalore on 4-8 March.

That gives a three-day turnaround in the middle of potentially ten days of cricket.

The pitches in India can make it an arduous task for the quicks.

However, that has always been the case and previous selection panels have not floated the idea of adding players to the touring party in the past.

Chances are there will be no new arrivals for the back half of the series but it does raise some interesting questions.

The most contentious member of the touring party has been wicketkeeper Matthew Wade.

His selection has caused the greatest amount of scrutiny with many believing his technique and ability will be found wanting when standing up over the stumps to the spinners on traditionally low and turning pitches. 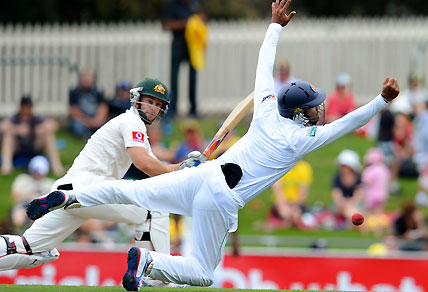 Social media, and articles here on The Roar, have been awash with opinion with much of it suggesting that Peter Nevill or the previously uncapped Chris Hartley would be a better bet in Indian conditions.

So what if Wade does flounder in the opening two Tests?

Peter Handscomb is in the touring party and he is capable of taking the gloves should Wade’s performance be sub-standard or should he suffer an injury.

He filled in for him during the Chappell-Hadlee ODI series in New Zealand last week.

Given he has spent very little time behind the stumps at first-class level, and India is arguably the most testing country for keepers, it would not be the ideal situation for the side.

Added to that is the fact that he is a nascent player at Test level and his batting at number five will be crucial.

Adding the arduous role of keeper to his workload in such trying conditions may not be beneficial to overall team performance.

Replacing someone like Wade with a player outside the squad is something that the selectors may be loathe to do should his performance prove problematic.

In doing so, they would be admitting that they chose the wrong man in the first place.

Parachuting in the likes of Chadd Sayers, Pat Cummins or James Pattinson to replace one of the existing pace trio on the grounds of fatigue or excessive workload – which is seen as a real issue nowadays – is a different matter.

Acclimatising to conditions is an important part of touring life.

However, with a week between the second and third Tests there would be an opportunity for a replacement keeper to get some solid time behind the stumps in the nets.

With the current scheduling the likes of Nevill and Hartley would be getting match exposure at home in the Sheffield Shield competition while the early part of the India series plays out.

Hopefully, Wade will be up to the task and the thought of a replacement will not be necessary.

But, in this modern era of cricket, greater consideration should be given to adding players to a tour party where the form of the incumbents is a concern.