As ecstasy, relief and sorrow swept right around Stamford Bridge on April 30, 2008, Frank Lampard fell to his knees and kissed the black armband which paid respects to the recent passing of his mother.

He had just dispatched a crucial penalty in a Champions League semi tie against Liverpool with typical assurance to send Chelsea on their way to a first ever European cup final.

How Chelsea’s record goalscorer mustered the courage and the mental fortitude to play that evening, let alone have the nerve to execute successfully one of the game’s most formidable mental exercises, is beyond explanation. However, what it can perhaps explain is how the once baby faced son of West Ham legend Frank Lampard Snr defied the odds and even public condemnation from his own supporters to retire after 21 years as possibly the greatest goal-scoring midfielder of all time.

It is the same mental toughness and determination that has seen Lampard go from strength to strength throughout his career, to culminate with the silver ball award in the 2005 ballon d’or as the second best footballer in the world behind Ronaldinho.

Nobody could have envisaged what was to transpire when Chelsea bought the services of Lampard in 2001 for 11million pounds, but over 13 years and 11 trophies including three league titles, four FA cups, two league cups, the Europa League and Chelsea’s first UEFA Champions League title, Lampard has been instrumental in transforming the club from challengers to winners.

His brace to seal Chelsea’s first title in 50 years at Bolton in 2005 will go down in Chelsea folklore, as will his double against Aston Villa in 2013 to equal and surpass Bobby Tambling’s long standing goal-scoring record of 202.

The old cliche of a ‘great goal scorer and a scorer of great goals’ reserved for strikers of the ilk of Thierry Henry and Cristiano Ronaldo does not feel out of place when describing Lampard – a midfielder – when going down memory lane reminiscing about some unforgettable goals. 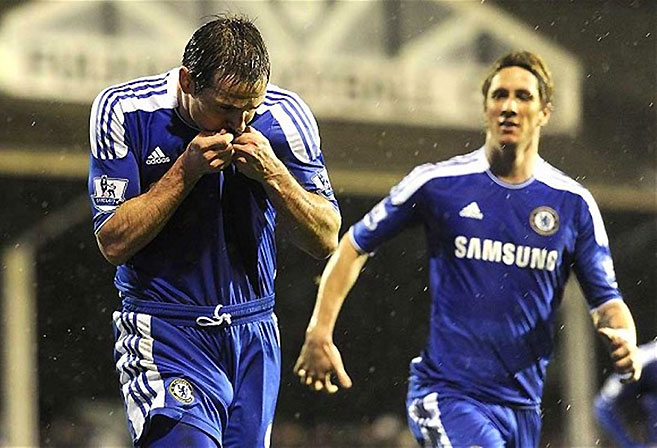 He may not have the ferocity in his shooting such as a Steven Gerrard or Didier Drogba or the finesse of a David Beckham or Thierry Henry, but the ability to consistently hit the target from distance on either foot whether off a step or a pass sets him apart.

There are literally too many goals from distance to recount, but strikes against Lazio, Fulham and Everton come to mind when thinking of his right foot. On his left goals against Crystal Palace, Wolves and the FA Cup winner against Everton demonstrate his adroitness with both feet.

The chest, swivel and immaculate left foot volley past Oilver Kahn and chip over Victor Valdes from the byline on literally a zero degree angle at the Nou Camp defies criticisms that Lampard scores mostly tap ins or lacks the technique of his midfield contemporaries.

Thunderous free kicks against Tottenham and Hull as well as the deftness to chip from the edge of the area against Hull and the cushioned volley from the outside of the foot against Stoke City illustrate just how accomplished Lampard’s technique is. There has always been an unfair stigma attached to Lampard when comparing him against his modern rivals and when assessing his game as a whole.

He was never the quickest or the most technically blessed player, hell some would argue he didn’t have the elegance or style to truly captivate but beauty is in the eye of the beholder.

Lampard knew his deficiencies as a young player so he went about on a mission to improve his game instead of accepting his talents for what they were and remain an average player.

The famed shuttle runs and shooting practice after training are the stuff of legend but only give a small insight into the psychology behind Lampard’s insatiable desire to hone and polish every crevice of his game be it passing, tackling, shooting, heading or stamina.

The winner of 106 England caps was not born a world-class player or with the gifts he exhibited for so long. He wasn’t a childhood prodigy such as David Beckham or a swashbuckling local starlet such as Steven Gerrard.

He didn’t have the benefit of a world class footballing education and system afforded to the likes of Andrea Pirlo, Paul Scholes and Xavi. He didn’t have the natural talent and brilliance of a Ronaldinho, Kaka or Deco.

Lampard’s journey is altogether different a sort of rags to riches story which defies the humble beginnings he experienced during the formative years at West Ham and the trials and tribulations those years brought.

Don’t get me wrong, West Ham is called the academy of football for no reason, it is a wonderful environment for young players to come through as their elite graduates attests to. However, in terms of being being elite and the very best in the world against the likes of Barcelona, Manchester United and AC Milan it lacks that extra something whether it be philosophical, tactical or psychological to preach that message which creates football identities and once in a lifetime talents. 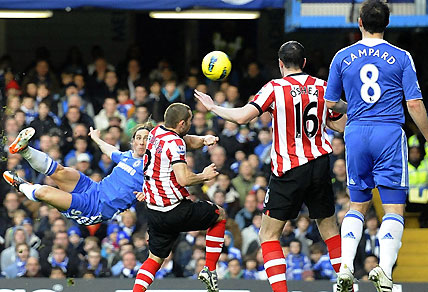 This reality has created this underlying perception that Lampard – with all his man made mastery and lack of god given gifts – is somehow inferior to his contemporaries when it comes to comparing the great midfield players of his generation. That Lampard was not born with the athleticism and robustness of Gerrard, the vision, range of passing and ability to run and control a game like Xavi or Pirlo, or the technical ability of Ronaldinho, Kaka or Deco should not count against him in the final reckoning.

The fact that Lampard transformed his considerable but relatively limited talents into something greater than the sum of its parts and transcended his game to levels which brought him to the pinnacle of the game both individually and collectively through diligence and the pursuit of perfection should not seen as a fallibility.

Conversely, it should be celebrated as a a triumph for the virtues of hard work, goal setting and commitment to achieve one’s ambitions.

The elitist mentality which essentially fuels these unfavourable views of Lampard when judging his career against others is counter intuitive and is a harmful attitude to hold as the Lampard’s of the future could be help back to help prosper the shiny and flamboyant talents.

The fact that Chelsea’s record goal scorer and possibly greatest ever player has come to score more goals than Gerrard, provide more assists than Scholes, be more versatile than Xavi and be a better defender and presser than Pirlo is testament to Lampard’s excellence, consistency and roundedness as a player.

He’s also enjoyed a tremendous amount of longevity in the game which is attributed to his unprecedented durability. He has hardly missed a game throughout his career which has helped him have many glorious years at the top without letting his value to his team drop a great deal even at 38 years of age.

Ronaldinho, Kaka and Deco enjoyed nowhere near as many years at the top level as Lampard and the former Chelsea mans peak seemingly stretched forever such was his consistency and contributions to his team.

A master of the disguised pass, his passing and interplay especially through one twos in search of angles is highly underrated as is his versatility as a player. As the famed box to box player he is renowned for he had the stamina and the intelligence to link the midfield and attack in a 4-3-3 as he did under Jose Mourinho. But he also excelled at the tip of Carlo Ancelotti’s midfield diamond scoring a career high 27 goals in 2009-10 as an advanced playmaker.

His ability in his later years as a pivot to sit and scrap while distributing from deep does not get the praise it deserves. His two long passes to Ramires against Barcelona over the two legs in the 2012 Champions League semi final does not get enough credit as both lead to the critical goals which helped seal progression to the final – a final they ultimately won on the greatest night in Chelsea’s history.

His ‘Lampardian’ runs from deep to come onto and score from knockdowns and crosses time and time again are indefinable as a quality and value as it is an intangible skill which cannot be taught.

This ability to ghost into opposition boxes and finish consistently is the signature trait that is synonymous with Frank Lampard.

It is telling as it illustrates everything you need to know about him as just that little bit more desire and fitness gives him the opportunity to allow him make the effort to get into the box and provide his a team an option when others don’t have the fitness or the finishing ability to make a difference from deep.

The Frank Lampard Story is one of desire, will and mental fortitude. These virtues have allowed him to maintain a level of consistency and excellence that rivals his contemporary adversaries who have a greater natural talent but have ultimately been pegged back.

Pegged back because the definition of a world class midfielder who helps his team score, create, defend and read the play is not limited to the aristocrats of the game but also to those who demonstrate the heart and determination to push themselves to the limit in order to compete and beat more fancied rivals.

Lampard’s statistics and achievements in the game as well as influence as a unique footballer whose mixture of intelligence, diligence and consummate professionalism have transcended his name to be among the games all-time great midfielders and become the epitome of consistency in the modern game. 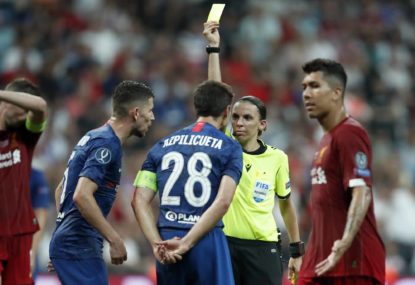