Are the Crows genuine contenders?

Over the past two seasons, the Adelaide Crows have been through more than any other AFL team.

The tragic murder of coach Phil Walsh came as a shock to the entire football community. In footballing terms, the departure of Patrick Dangerfield was set to have negative consequences last year – but the Crows responded with two consecutive semi-final appearances and a near top-four finish in 2016.

Under the leadership of Taylor Walker, the best captain in the AFL as voted by the players, the Crows have shown discipline, structure and hunger, especially under head coach Don Pyke in 2016.

After the disappointing exit of Dangerfield, the Crows young midfielders picked up the slack last season, led by Rory Sloane, Matt Crouch and Charlie Cameron, while the forward line has made a case as the best in the AFL.

Their slingshot style of football, which is almost unbeatable at the Adelaide Oval, made them the highest scoring team in the competition last year.

But after disappointing losses to Hawthorn and Sydney to end their past two finals campaigns, do we take them as serious contenders in 2017?

First of all, they were by far the healthiest team in the league last season. Suffering no long term injuries to key players, and very few short-term injuries, they were able to field a near-identical team each week which gave them the best chance to succeed. 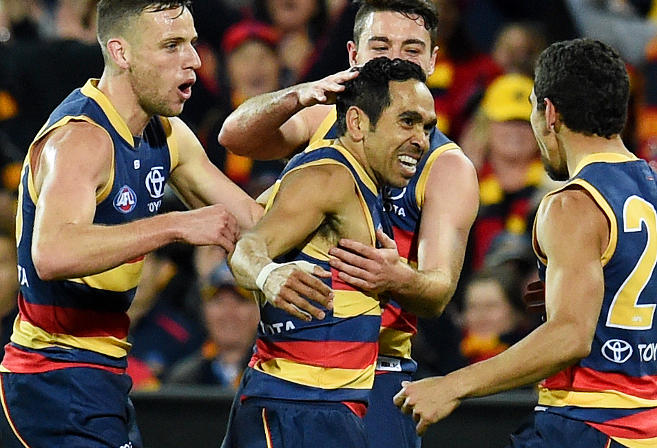 That said, they showed they have some of the best young players in the competition, led by Jake Lever, Mitch McGovern, Charlie Cameron, Rory Laird and the Crouch brothers. The development of Rory Atkins and Kyle Hartigan helped to resolve previous weaknesses, while the forward line trio of Jenkins, Walker and Betts kicked a combined 184 goals.

Adelaide had a reasonably tough draw last year, but some key away wins over West Coast, Richmond and Carlton helped them secure a home final.

Their draw this year is better, so that will hold them in good stead, although there are no easy wins in this day and age.

The dominance of GWS, Sydney and the Western Bulldogs makes it difficult for teams in the 5-8 range to step up and win a premiership.

The Crows do have great depth on their list, however, which is essential in a long, gruelling season. Their SANFL team performed well last season and there is some promising young talent in Reily O’Brien, Harrison Wigg and Harry Dear coming through.

The midfield is always the biggest challenge for Adelaide, though. When teams get on top in the midfield battle, Adelaide struggles to counter that. And with Scott Thompson not getting any younger, Jarred Lyons joining Gold Coast and Brad Crouch yet again injured, this will be the biggest test for the Crows tilt at September.

We know the quality of Rory Sloane, Charlie Cameron and Matt Crouch, but if they are performing slightly below par Adelaide doesn’t have enough depth to compete with the best midfields in the game.

But with the attacking style of footy they play and the blend of youth and experience, it would be naive to count them out. They are by no means favourites, or even in the top three favourites, but have shown that they can compete with the best teams in the league, and could be a force to be reckoned with over the next five years.