Brace yourselves, Jarryd Hayne is primed for his third Dally M

When he left the NRL for the brighter shores of America and the NFL (which of course turned out to be positively un-bright), Jarryd Hayne was at the peak of his rugby league powers.

While the star fullback might not have been a peerless player – the likes of Johnathan Thurston, Greg Inglis, Cameron Smith and Cooper Cronk saw to that – he was as good a player in the NRL. A second Dally M medal was proof enough of that.

Fast forward through the failed stints in the NFL and Fiji’s rugby sevens team to today, and question marks surround Hayne’s form heading into the 2017 season.

There’s no doubt he’s a key to the Titans’ hopes this year, but there are concerns over just how effective he can be.

Will he be able to build a productive on-field relationship with his halves, Ash Tylor and Kane Elgey without treading on either of the young guns’ toes? More importantly, can he regain the form that saw him named the NRL’s best player on two occasions?

The answer is “yes”.

First off, the signs were positive last year. Hayne was certainly not back at his peak, but there were moments that had fans’ mouths watering. A crunching tackle here – no doubt a product of the weight he had to put on with the San Francisco 49ers – a dazzling step there.

Most notable, of course, was the game-winning field goal against the hapless Tigers at Campbelltown Stadium, which showed Hayne has lost none of his appetite for stepping up when his side needs him.

Make no mistake, the Titans need more of the same from their star fullback in 2017.

While Taylor and Elgey are both extremely promising, neither has the big-game experience of Hayne, a man who led Parramatta to a grand final and the Blues to the rarest of State of Origin series victories. The youngsters don’t yet have what it takes to drag a side into the finals.

Hayne does. He’s done it in the past with Parramatta, and he’s going to do it again with the Titans this year. 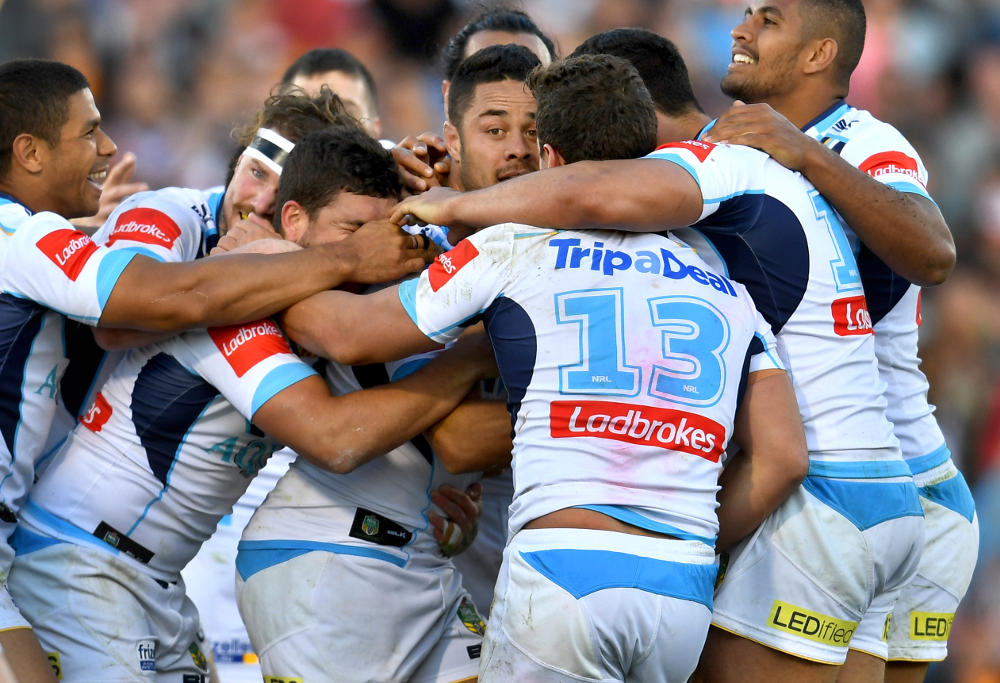 Hayne has reportedly shed the kilos for the upcoming season, getting him back towards a nimbler, lighter weight more suited to the NRL rather than the chunky and bulky physique which is a trademark of the NFL.

With a bit of luck, though, he’ll retain much of the strength and explosiveness gained over in the States, giving him an edge on his opponents this year.

As a guy who was never exactly weak, that’s an ominous prospect for the rest of the competition.

Plus, Hayne has had a full offseason to re-acclimatise to the NRL, giving his skills and match awareness the pick-me-up they need.

With that, he’s primed to rediscover his best form, and when he does, he’s going to start getting the Titans plenty of victories.

As the stand-out player on the Gold Coast, Hayne will also be demanding the lion’s share of the Dally M votes whenever the side finishes on the right end of the scoreline.

Taylor will pick up a fair few, Ryan James and Nathan Peats could nab the odd one here or there, but for the most part, it’s going to be the big-game fullback who’s stamping his authority on games.

With that in mind, when it comes time for the NRL to announce the competition’s best player for 2017 in September, don’t be surprised to see the code-hopping superstar accepting his third Dally M medal.

And who knows, at 29 years old, he’s probably a chance for a few more in the years to come.