How O'Keefe the pupil out-bowled the Indian spinners

Not in his wildest dream would Steve Smith have thought that his team would be sensing a victory after just two days of cricket in India.

After watching their batsmen take a giant leap towards playing quality spin bowling on difficult track, the bowlers led by Steve O’Keefe out bowled their fancied counterparts in Ravindra Jadeja and Ravichandran Ashwin.

Ever since the 2015 ‘A’ Tour of India, O’Keefe had been pencilled in as part of Australia’s plans to win in Asian conditions.

The idea to make O’Keefe the lynch-pin of Australian bowling attack revolved around the fact that various statistics that were fed through to the Australian think-tank suggested he would poses more of a threat on the spin friendly conditions, largely due to the technicalities in his action which enables him to lower his arm.

The fact that both O’Leefe had always outplayed Nathan Lyon on the spin friendly pitches at the Sydney Cricket Ground for NSW was the perfect indicator that Australian cricket had a bowler that fit the bill for the Asian conditions.

The only thing that was needed to complete O’Keefe’s education was to find a coach that had experience of bowling in Asia.

Troy Cooley, the head coach at Cricket Australia’s Centre of Exellence introduced O’Keefe to former Indian cricketer Sridhar Sriram couple of years ago in Chennai during a camp. Since then, the pair of them struck a great bond and at the end of days play O’keefe credited his mentor for special spell.

“Sree [Sriram], is an excellent spin-bowling coach. I’ve worked with him a couple times now and he’s really impressive, so that’s really helped me I think.”

After an uninspiring opening spell, Sridhar Sriram took O’Keefe out to the middle during the lunch break and pointed to length on the pitch that he should be aiming at. The pupil followed the master’s instructions and changed the course of the match with figures of 6-5 in 25 balls.

“Sree is like ‘let’s go out and bowl until you feel comfortable with it and then hit it, let’s start up with it in the next session.”

To say it worked out this time would be an understatement.

While Ashwin and Jadeja continued to beat the bat, O’Keefe’s length, turn, and bounce managed to kiss the edges. The main reason being is that Sridhar convinced O’Keefe to bowl that yard fuller that the Indian spinners. That yard is now worth 298 runs with three days to play. 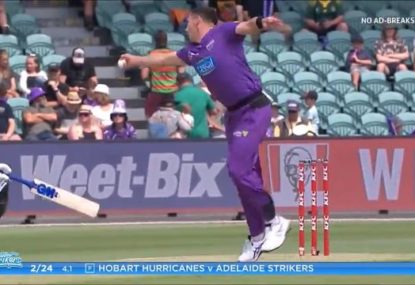 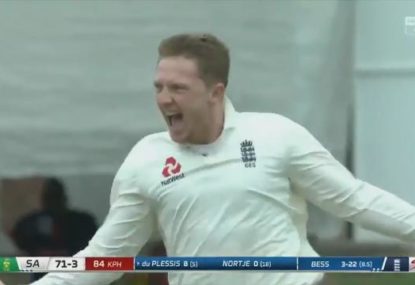