A stand alone grand final blockbuster at Adelaide Oval awaits Adelaide if they can maintain their place atop the AFL Women’s ladder.

The Crows, unbeaten after four rounds, have played in front of around 9,000 fans at their first two home games at Thebarton Oval.

But the AFL plans to utilise the 53,500-seat stadium if Bec Goddard’s team claims the minor premiership to earn the right to host the inaugural premiership decider.

“Certainly our preference is to play at Adelaide Oval if the Crows finish on top,” AFL game development chief Simon Lethlean told AAP.

“We think it would be a pretty big event for the town and the state, so we’d be confident we can arrange something with Adelaide Oval that works for all parties.”

In a bid to boost grand final attendance and the television audience, the AFL has set aside an afternoon timeslot on Saturday, March 25, when no men’s matches are scheduled.

Adelaide’s men’s team kicks off its premiership campaign against Greater Western Sydney at Adelaide Oval the day after.

The league will be able to further gauge the level of local interest in attending Crows AFLW games when they take on Brisbane in a top-of-the-table clash at Norwood Oval on Saturday night.

The Lions are the only other undefeated team in the competition, with the winner of Saturday’s encounter in the box seat to host the grand final.

Second-placed Brisbane are keen to play the grand final at the Gabba should they finish top.

The tricky part for the AFL in that scenario is the men’s game between Gold Coast and Brisbane kicking off at Metricon Stadium at 6.25pm, Queensland time.

But the AFL are hopeful an early grand final start time wouldn’t force Lions fans to choose between the men’s and women’s games.

“There will be Brisbane fans heading down to the Gold Coast, but with a one-o’clock grand final start we’d be hopeful they could do both,” Lethlean said.

Back-to-back Adele concerts at the ground in the first week of March are another potential stumbling block, but Lethlean is confident there will be enough time between the events for the turf to recover.

Melbourne, who have put together a three-match winning streak to sit a game back in third, and Carlton, another game back in fourth, are the only other realistic hopes of hosting the grand final.

Lethlean confirmed the likely grand final venue in Melbourne is Princes Park, the scene of the historic season-opening clash between Collingwood and Carlton.

Hundreds of fans were turned away from that match after the gates were closed when the venue’s 24,500 capacity was reached.

While admission for the grand final will remain free, Lethlean said the league is working through the possibility of ticketing the game to avoid a similar scenario. 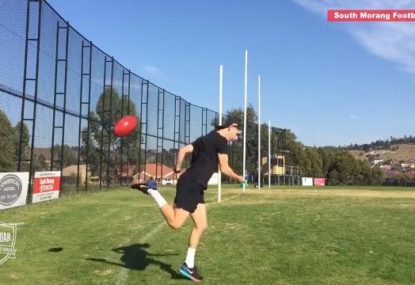 The AFL has pondered the idea of having quarantine hubs in isolated areas to recommence the season, with Tasmania, Western Australia, Northern Territory, and Victoria thrown up as potential locations.

LeBron James passes it to Gary Ablett, Ablett fends off the tackles and dishes it out to Zach Hyman, Hyman throws it to Tom Brady and Brady finishes with a goal!