Kochie is kidding himself over 'Jumpergate'

News broke this week that Port Adelaide president David Koch has warned his opposite number at the Gold Coast, Tony Cochrane, that the Suns will never again be invited to China if they wear their home red-and-gold guernsey for May’s historic match.

Not for the first time in his high-profile role at the Power, Kochie is kidding himself. And here’s why.

I’ve been critical of Port Adelaide’s attitude towards playing premiership games in China ever since they announced their intentions last year.

I’m fully supportive of the idea to play AFL games overseas, and the push to try and get in the door of the potentially highly profitable Chinese sporting market, as well as the faint hope that one day our great game could move beyond the borders of Australia and become an international competition, is definitely a concept worth investing time and money in.

But from day one, the Power have placed themselves on a pedestal which I find ridiculous. If Port want to broaden the horizons of the AFL and try to succeed in China, then great, power to them. But the refusal to sacrifice a single Adelaide Oval home game, and make some other team give up one of theirs to fly their players on a 15,000-kilometre round trip (more if it was a Melbourne or Sydney club) while at the same time keeping all the rights as if they were the home side?

It just left a bad taste in my mouth. Why should Port have the right to proudly label themselves as AFL pioneers, going where no club had gone before, and not have to sacrifice anything to do it? 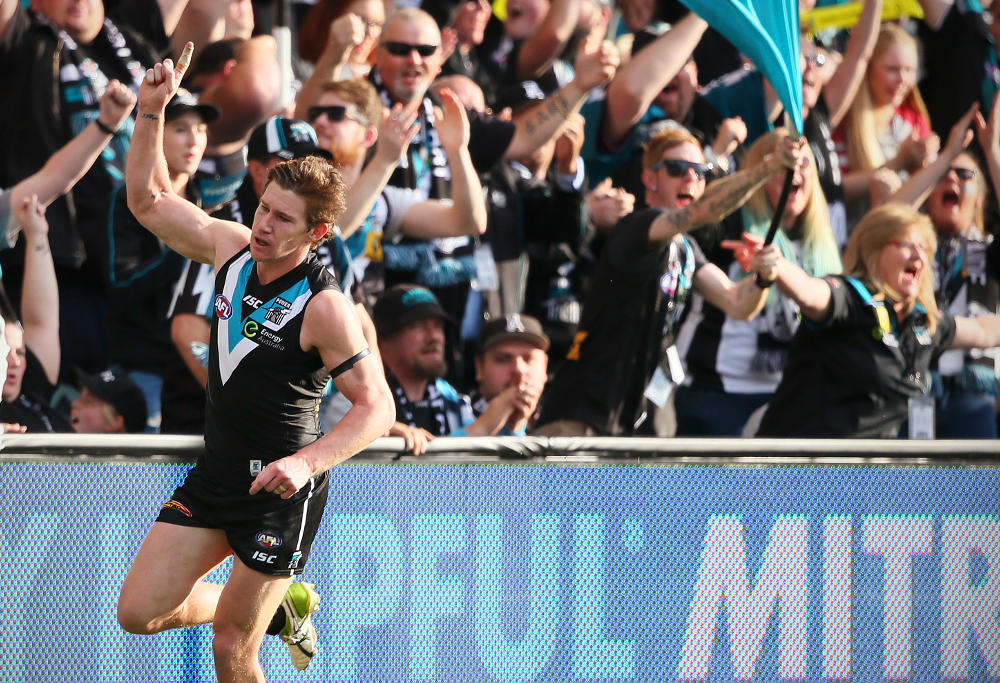 I’ll admit, as a Western Bulldogs fanatic, when Port announced their intentions for 2017’s Shanghai match, I immediately feared my club would be the one to take the plunge, if only for the sizeable payout that sacrificing a home game would ensure.

Could you imagine Hawthorn, or Collingwood, or any of the successful interstate clubs giving up a home game and deprive 50,000 diehard members the chance to cheer on their team? Nope.

It would be one of the cash-strapped clubs, like the Bulldogs, or North Melbourne, or perhaps Carlton, that would be forced to take the plunge.

Fortunately, for whatever reason, be it a financial consideration or perhaps a desire to also crack the Chinese market (after all, plenty of Chinese tourists visit the Gold Coast), the Suns agreed to Port’s terms.

Fine. Fair enough. I don’t really understand why, but good luck to you.

But for Koch to now thank the Suns for their generosity by demanding they play in their white away strip or never be invited back?

Give me a spell, Kochie.

Why do Port think they have the right to corner the Chinese market for themselves, especially since they aren’t even willing to sacrifice a home game to do it? Indeed, Gold Coast has a much stronger link with China than some greasy seaside town on the outskirts of Adelaide.

According to a poll of 3.6 million Chinese tourists, it’s China’s fourth-favourite holiday destination. And the Suns’ red and gold jumper matches China’s national colours. That’s sure to get a few Chinese fans on their side.

Port Adelaide seem to think that having the Suns play in their predominantly white away guernsey was part of the home rights Gold Coast signed over for $500,000 when they agreed to the match. But in truth, the jumpers teams wear have very little to do with who’s the ‘home’ side and who’s the ‘away’ side. It’s all about whether the jumpers clash.

The AFL have set a precedent that if there is no clash whatsoever between the home guernseys of two sides, both sides may wear their home jumpers. That’s why in last year’s grand final, both Sydney and the Western Bulldogs wore their regular strips, down to the Bulldogs’ standard blue shorts.

Yes, if there’s even the slightest clash – like, say, St Kilda and Collingwood – the AFL deems it appropriate for the away side to wear a light-coloured ‘clash’ strip, but in the case of Gold Coast and Port Adelaide, there’s not the remotest chance of that. Not even the shorts clash – Gold Coast’s are bright red-orange, while Port’s are charcoal black.

Maybe ‘Jumpergate’ is just the result of Port Adelaide wanting to squeeze every last drop out of the home rights they paid Gold Coast $500,000 for. In that case, how about removing the worry and volunteer one of your own home games instead of poaching them off someone else?

Very rightly, Gold Coast, Cochrane and new chief executive Mark Evans have stood firm thus far (if only the team they represent had showed such conviction in the past two years!)

They have every right to wear their regular home strip, which, thanks to the colours, could open up parts of the Chinese market to them as well.

Heck, if both sides can integrate themselves in Shanghai and develop a fan-base over there, which should be an aim for both sides, the Gold Coast-Port Adelaide fixture could well become not just a yearly fixture, but potentially a marquee match.

Koch claims Gold Coast are “playing silly buggers” in this war on jumpers. But if you ask this author, the only silly bugger here is the guy from Sunrise.