Marcus Bontempelli will end the year as the AFL's best player

He’s just three seasons into what will be a long AFL career, but the Western Bulldogs’ Marcus Bontempelli is ready to take the mantle of the game’s best player.

It feels like Bontempelli has been a feature of the AFL’s tapestry for a decade, such has been the fervour his first 63 games have whipped up among football aficionados.

The Dogs’ No.4 draft pick from 2013 debuted as the great white hope of a team mired in the middle phase of rebuild.

His was an auspicious debut year, playing the final 14 games of the season after a Round 7 injury, averaging 17 disposals, 3.5 tackles, eight contested possessions and 2.5 clearances in a team that won just four games.

Bontempelli has never really looked back, playing 47 of the subsequent 49 games, being part of a premiership team, winning his club’s best and fairest count in the premiership year, and generally earning the kind of universal praise and respect reserved for the top half a per cent of players in the game.

He is the cover star of the AFL’s upcoming AFL Live video game, winning around 70 per cent of the fan vote in an 18-man race.

His 2016 season was excellent, if a bit slow starting by way of impact, due to a hip injury he carried into the year. His third year, 20-vote performance in last year’s Brownlow medal, was better than all but one medal winner of the past ten years. No, really. 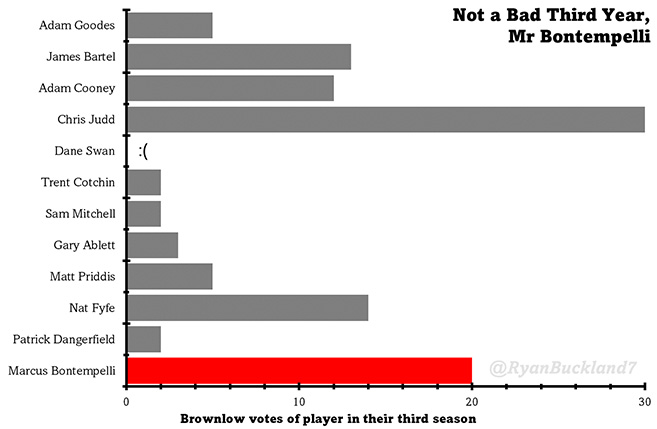 The Bulldogs superstar plays something of a unique role for a superstar: when his game is stripped down, it becomes clear Bontempelli is effectively a utility.

That is normally a characterisation reserved for the bottom four or so players in a team’s best 22, but for Bontempelli, it is a marker of how good he is at a range of football skills.

In his 68 game career, Bontempelli has had:

Bontempelli has demonstrated flexibility that might be unprecedented in the AFL – at least in the modern era.

This is partly due to the scheme of Dogs coach Luke Beveridge, which requires most of his players to be useful across the ground.

Plenty of players can play inside or outside midfield, can take marks forward or backward of centre, switch from tag to attack, but none can claim to do multiple things at a very high level.

He combines the poise, steadiness and decision making of Scott Pendlebury – although the Collingwood captain is still the AFL’s “lord of bullet time” as Jay Croucher likes to say – with the frame and skills of a key position player.

One of his plays of the year came against Collingwood, when Bontempelli broke free of a stoppage, sucked in five Pies as he galloped forward, allowing Lin Jong to get space before the maestro hit him with a perfect release handpass.

Marcus Bontempelli: precise disposal and a bonkers football IQ, with the frame of a key forward #AFL #BeMoreBulldog pic.twitter.com/i4XKdKW5rM

Inside forward 50, Bontempelli is as comfortable dealing with a groundball as a high marking opportunity.

His highlight videos are chock full of scores created by knock ons and other light-touch wizardry.

He creates just as many scoring opportunities for his teammates as he snaffles for himself in these situations.

Marcus Bontempelli is also outstanding when the ball hits the deck, particularly for a guy listed as 193cm #AFL #BeMoreBulldog pic.twitter.com/R91bCiTx5E

Around the ground, Bontempelli has the gait of a baby giraffe, but the momentum of an African elephant. He’s nearly untackleable when he breaks into a run, his powerful, long strides difficult for all but the best stoppers to contain.

In a meta-game that prioritises the quick lateral or backwards handball, Bontempelli runs in straight lines through opponents. It’s a ‘see ball, win ball’ mentality that coaches everywhere spend entire seasons drumming into their players’ heads; Bontempelli knows no other way.

Patrick Dangerfield is unique for his combination of straight line pace and long kicking, which makes him a metres-gained machine.

Nat Fyfe combines savant-like ball-winning abilities on the ground with an aerial prowess rarely seen in a midfielder.

Josh P Kennedy uses his leverage to extract possessions when it shouldn’t be possible.

Lance Franklin is the league’s best small forward, in a key forward’s body.

Dustin Martin is the football equivalent of Hugh Jackman’s Wolverine.

Jedi Knight Alex Rance could stop a freight train if they allowed them on a football field.

I have no reason to believe Sam Mitchell is not an amoeba that has taken the form of a human, such is his ability to contort his body to make footballs do things they aren’t supposed to.

At his peak, Gary Ablett Jr could accumulate possession between the arcs at a rate that seems impossible. Now he might become the best small forward in the game – we will see.

These players that sit at the upper echelons of the league today – the top one per cent – are what I have grown to call game changers. They are rare players who can swing a contest through their own actions.

Bontempelli could already be in this class of player, but if he’s not then 2017 is the year.

How? With a central role in the Western Bulldogs’ title defence, which looks more like it is on track than most pundits will have you believe.

As the Dogs continue to evolve under Beveridge, it is reasonable to expect Bontempelli to continue to create more of the team’s offence out of stoppages and congestion, and to spend time as a threatening option inside 50.

It could end with a finish near the pointy end in this year’s Brownlow medal count. If you ask me, regardless of his position in the Brownlow, 2017 will end with Marcus Bontempelli considered the best player in the game.