The Butler who does it all: Chicago's superstar continues to keep them afloat

Even on a team more notable for its headlines than its play, Jimmy Butler remains basketball’s most underrated superstar.

Amid the Chicago chaos – the incomprehensible free agent signings, the trades ranging from problematic to plain dumb, the identity crisis on the court and the general crisis off of it – Butler has been the Bulls’ rock.

He’s the reason – almost the sole reason – that a team that has spent the season engulfed in self-inflicted controversy and mediocrity has stayed, improbably, in the thick of the playoff race.

The Bulls are 31-31, with the league’s 20th best offence and 13th best defence. They are nowhere right now, and ‘somewhere’ is further away for the franchise than it’s been for a while. The season feels like a disappointment, but then you take a step back and realise that it’s not. It can’t be. This is all the Bulls were ever going to be.

Their off-season roster construction was a 2001 fever dream, signing both 35-year-old Dwyane Wade and no-longer-good-at-basketball Rajon Rondo to play with Butler, a capable but below-average shooter. The Bulls have spent this season paying almost $55 million for a big name perimeter trinity that averages two made threes per game – less than CJ Miles averages by himself each night. 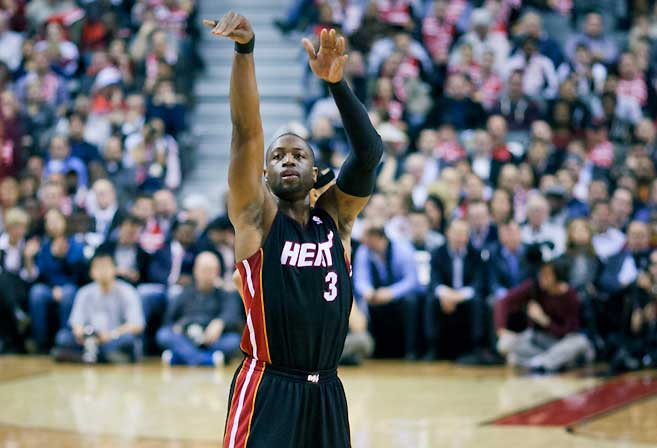 Chicago attempts the fewest number of threes per game in the league, barely half as many as Houston. They take plenty of pull-up jumpers and rank in the bottom four for catch and shoot shots. Every time they take the court they’re fighting a mathematical deficit, an equation that persistently weighs against them.

The antiquated, unsuccessful style combined with the personality issues and infighting should have been a cocktail much too poisonous, a basketball death sentence.

But they endure, because of Butler.

Butler’s star turn was the least foreseeable of any recent top-10 player in the league. And still, today, despite the unquestionable production of an elite player (24-6-5 on good efficiency with two steals per game and a low turnover rate), his aesthetic doesn’t necessarily cohere with the superstar archetype.

He doesn’t score in explosive bunches like Stephen Curry and he doesn’t loom over the game and its every breath as a force of nature like LeBron James. He doesn’t have nuclear athleticism like Russell Westbrook or move with the slithering grace of Paul George or Kawhi Leonard, the two players he’s most often compared to.

What ultimately makes Butler special is his strength and balance. He is the antithesis of ‘Slippin’ Jimmy’. He doesn’t glide to the hoop as much as he powers toward it, and the power is workmanlike, unlike Westbrook, who ascends more than he drives. While Westbrook seems like a cyborg, with Butler, you can see that he feels pain.

His strength is remarkable in a graspable, human way, and he makes opponents feel it with his relentless rim attacks, getting to the line more than anyone except Westbrook, James Harden and DeMarcus Cousins. In the Chicago congestion, Butler has no space to drive, but he creates it through sheer might, genius and fearlessness.

On defence though, lies the true beauty of Butler. He’s a perfect marriage of anticipation, quickness, poise and muscle, with the speed to chase JJ Redick around screens, the savvy and balance to stay in front of and close to Chris Paul, and the brute strength to hold up in the post on a switch against Blake Griffin.

He hits his free throws at an elite rate, crashes the glass, knows when to gamble for steals and when to stay honest, and has gradually become an adept passer and competent shooter from deep. With everything falling apart around him, Butler has held things together in Chicago, a Super Saiyan version of the ‘glue guy’.

On most nights, Butler will seem like the third or fourth biggest personality on the court. He’s not flashy and he’s not iconic. But then you look up, and it’s the fourth quarter against Golden State, and Butler is outplaying Curry, Klay Thompson and Draymond Green, and leading his flawed team to their best win of the season.

Outside of Butler, the Bulls are a high-profile nothing. Wade is still capable, but his old-man game is getting less effective with age, and he’s having the least efficient season of his career. He’s taking more threes than usual and making them at a career-best rate, but that rate would be the career-worst rate for most proficient marksmen. Wade remains a defensive liability, and it’s been three years since his team has been better with him on the floor.

Despite a post-controversy return to flirting with competence, Rondo is finished, and the rest of the team’s point guard situation sits somewhere on the spectrum between ‘vaguely fascinating’ and ‘calamitous’, on most nights skewing towards the latter.

Robin Lopez is fine but almost aggressively unremarkable, and while they have flashes, normal vision sees Nikola Mirotic and Bobby Portis as disappointments. At least the Bulls have Paul Zipser to build around.

Butler has to do it all for Chicago, and for the most part he’s been able to. While stars like Anthony Davis, DeMarcus Cousins, Carmelo Anthony and Damian Lillard languish on teams well below .500, Butler has dragged the Bulls into respectability. Take him off this team and they’re the Nets.

He has his limitations, not least of all his ability to stay on the court (he missed at least 15 games each of the past three seasons), a weakness possibly inextricably linked to what most will know him for – ALL those minutes.

But with Kyle Lowry out, Butler will head into the East playoffs as the second best player in the conference. The Bulls won’t be relevant until they (somehow) surround Butler with a capable supporting cast, or decide it’s best to burn it all down and rebuild with the assets they’d receive in trading him away.

Until that moment comes or doesn’t, though, Butler will keep them afloat, even if dry land is much too far away to reach.