The five AFL coaches under the pump in 2017

Last year was a good year for AFL coaches, with Justin Leppitsch being the only casualty. In a world where results mean everything, there is bound to be a coach that is sacked this year.

Here are the five coaches who are under the most pressure to deliver in the 2017 season.

Ken Hinkley
My prediction for the first coaching casualty of 2017.

Hinkley’s Port side have been a letdown since their Preliminary Final appearance in 2014. After Port’s 2014 season many expected Hinkley’s side to make the push into the top four and have a tilt at the flag. However, they seem to have stagnated coming 9th and 10th in the two following seasons.

With the teams that finished around them in 2016 all seemingly stronger and Port Adelaide’s list remaining very much the same bar the loss of star forward John Butcher; Hinkley will find it challenging to make the top eight this year.

Port’s list is one that you would expect to be in the ‘Premiership Window’, so the higher ups at Port Adelaide could opt for a change if Port Adelaide has another disappointing season.

Hinkley will need to find the same gusto and aggressive play style that his team showed on its run to the Preliminary Finals in 2014, to give fans a reason to believe that their side is improving under his reign, otherwise Hinkley could find himself out of a job. 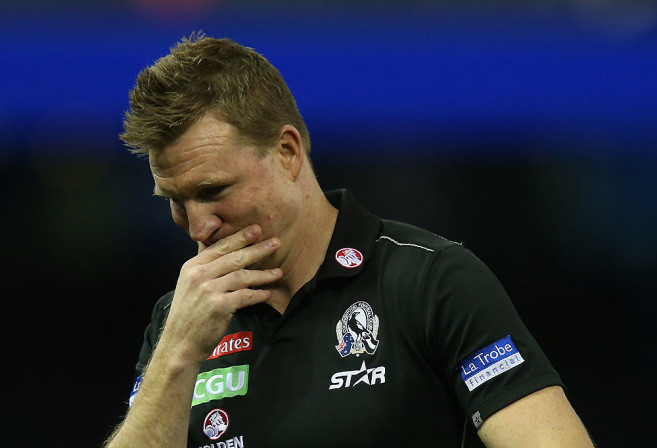 Collingwood’s golden boy throughout the 2000s is in a very similar situation to Damien Hardwick.

Also coming off a disappointing season, albeit one marred with injuries and off-field scrutiny, Buckley needs to make a finals appearance this year.

With players such as Jamie Elliot, Taylor Adams, and Tom Langdon among others all primed to make returns this year there are no more excuses for Buckley. Coming into his fifth year on the, job Buckley has had enough time to put his own twist on Collingwood’s list and play style. With one of the strongest midfield’s in the AFL and a plethora of young talent around the ground, Buckley has the the tools at his disposal to make the finals this year.

President Eddie McGuire and the Pies faithful will both expect to see September action this year, and if they can’t achieve that it is likely we would see the end of Buckley’s tenure as coach of Collingwood. Coming into the last year of his contract it is finals or bust for Bucks.

Damien Hardwick
Hardwick has stuck around for a few years longer than he would have in many other sports. If Claudio Ranieri couldn’t get a full season in charge after winning the league with Leicester City, then I have no idea how Dimma still has his job – but that’s another topic.

After a disappointing season in 2016 where the Tigers only notched up eight wins, many Richmond fans called for a change at Tigerland. The pressure is on for Hardwick to take Richmond into the finals before his contract expires at the end of 2018.

If Richmond finishes higher on the ladder than they did in 2016 and show some improvement, Hardwick will most likely be given a final shot in 2018 regardless of whether Richmond plays finals footy in 2017.

With new additions in the offseason and a seemingly rejuvenated and more entertaining game plan at Punt Road, there is more than enough reason to believe that Hardwick’s Richmond can at least challenge for the top eight which should be enough to please the Richmond board.

Whether they can make the finals or not is still up in the air with teams like St. Kilda, Melbourne, and Collingwood also strengthening in the offseason.

If Hardwick can implement a more entertaining and hard-working side in 2017 he will at least survive until next year. What happens to Hardwick after that is anyone’s guess. 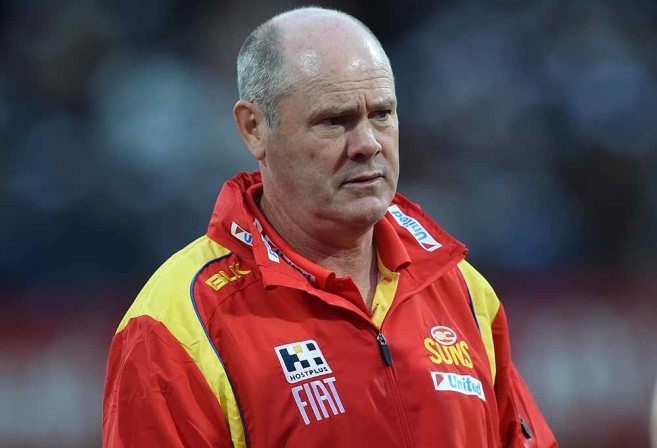 Rocket had a rough 2016. The seemingly cursed Suns saw injury after injury along with the losses of Dion Prestia and Jaeger O’Meara in the off-season.

With news coming out that Gary Ablett wanted to pull a Lebron James and return to Geelong during the trade period and players leaving left right and centre, Rocket has an uphill battle to rejuvenate the Suns.

In the last year of his contract, at a side that is now rebuilding with players asking to return home and a history of cultural issues, Eade needs to at least show some improvement to keep his job past 2017.

More important than on-field results for Eade and the Suns will be to create an environment where players will want to stay for reasons other than the nice weather and questionable nightlife.

If Eade can invigorate his team, keep them out of trouble, and make them want to stay at the club then he should be offered a contract extension if they can have some decent on-field showings and not get blown out of the water by better sides.

Eade’s side still has the talent to succeed despite losing players in the past few seasons. If the Suns can remain injury free and do better than in 2016 and even make a push for the top eight, then the Sun’s will keep Eade around for the next few years as they look to make their first finals appearance.

Brad Scott
They are knees deep in a rebuild at Arden Street after the departures of club legends Drew Petrie, Brent Harvey, and Robin Nahas.

While a run into the finals won’t be mandatory for Scott, if North Melbourne’s form from the second half of 2016 shows signs it is continuing he won’t be at all comfortable.

It is expected that North will see a drop off in 2017 with them likely to give some of their younger players chances at AFL level. North still have a good enough list to finish somewhere between 12th and 5th, they have a stronger side than many people have been giving them credit for.

As long as Scott’s side can challenge for the top eight and doesn’t have any embarrassing defeats then Scott will stay in his job. If they have an awful season it is possible that James Brayshaw and North’s management decides that a freshening up is needed.

Brad Scott won’t be under as much pressure to produce results as some other coaches are, but he will need to show that the club is going in the right direction.