Don’t let that be us. We can’t be about that life. We need to represent the world we live in.

Where a Rhys Mathieson ducked free consistently provides more joy than another Tom Mitchell handball. Where an Eddie Betts banana from the pocket literally counts for six points, but emotionally counts for at least double.

The biggest move this off-season could be Sam Mitchell to West Coast (Mitchell didn’t make my personal Top 50). Or is it Tom Liberatore getting a ‘friar tuck’ shaved into his head while playing ruck for Macau (Ken Sakata Number 14)?

We need to rethink what we mean by ‘best’.

The only thing stopping us was facts and stats. It’s difficult to put a number on a friar tuck haircut. Meanwhile, you can look up Tom Mitchell’s handball/game stat – 17.04, a number which means nothing.

It took me a while to research, but now I have the numbers to back it up. Granted, they’re not strictly football stats. But they are here to support my arguments all the same*.

*All facts and stats in this article are featured in italics.

20. Patrick Cripps (Carlton Blues)
Patrick Cripps is an accurate kick away from being the best player in the game. He is already the league’s number one clearance player. He has awareness, clean hands, burst speed and strength. In the centre-square, Cripps is the AFL’s apex predator. 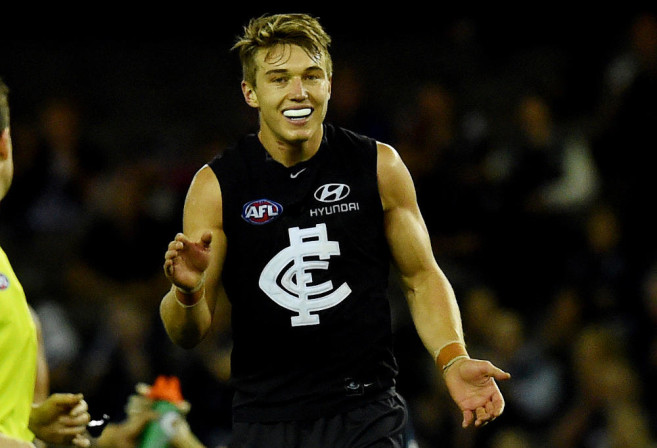 Carlton is a mess. As a football team, they are most known for featuring a slowly-moving hovercraft during their pre-game presentation. They crashed it in the Yarra River two years ago.

This is what psychologists refer to as ‘mate value discrepancy’ or more colloquially- ‘what is she doing with him?’ Cripps is hot, Carlton is not. This is a breakup waiting to happen.

The only hope Carlton have in keeping Cripps lies in a popular experiment performed at Northwestern University in 2015. It tries to explain what she is in fact doing with him.

Incidentally the Blues, a drastically less attractive partner, have nine months to demonstrate their value in other ways. Here’s hoping they have the foresight to acquire another hovercraft this season.

This off-season, Daniel Hannebery quit alcohol. This has been publicised as a positive mental step for a player whose off-field activities briefly rivalled his on-field talent.

But let’s drill down. In a time when the pharmaceutical effect on human performance is heavily scrutinised, addition may be by subtraction.

We know alcohol has numerous effects on exercise and recovery.

When taken after exercise, alcohol has profound effects on how the human body processes fuels. Acute intoxication can decrease post-exercise levels of serum fatty acid and glucose concentrations.

This is key. Hannebery was already an outstanding athlete. But physiologically, he may have been a sports car on dodgy petrol.

Using his metabolism as intended may push his system to another level of performance. Hannebery just won Sydney’s pre-season three-kilometre time trial.

Sobriety is the new peptide. The science checks out.

18. Sam Mitchell (West Coast Eagles)
When there’s a barely/non-consensual trade in the AFL, Hawthorn is typically involved. Josh Gibson was poached for picks 25 and 41. Brian Lake for pick 41 and swapped picks. Former No. 2 pick Jono O’Rourke went for pick 19 and a pick swap.

Hawthorn losing superstar Sam Mitchell for picks 52, 70 and 88 is the classic Hawks trade in reverse.

Granted, Mitchell is turning 54 years old this year. But with the exception of Liam Jones, Mitchell is the most consistent player in the AFL. He makes West Coast’s perennial flag threat much more real.

None of this makes sense.

There is only one place where aggressors become victims of their own crimes. Prison.

Is Hawthorn in trade jail for past crimes? Is karma having its way with Hawthorn? With one off-season of exposed form, it’s difficult to know. But I should have you know, life isn’t fun in prison.

In a survey of 1,788 male inmates in Midwestern prisons by Prison Journal, about 21 per cent claimed they had been coerced or pressured into [redacted] during their incarceration.

Hawthorn have claimed that accomodating Jaeger O’Meara had nothing to do with losing a club legend, or a salary cap. These deals were independent of each other, they said.

This is a typical response. It is the language of trauma. Victims of non-consensual abuse are unlikely to come forward. They fear judgment, embarrassment and the lack of control.

Sam Mitchell could very well win the flag for West Coast. Meanwhile, Hawthorn’s Jaeger O’Meara has a patella tendon in the same way I have a writing career. This is a disaster. 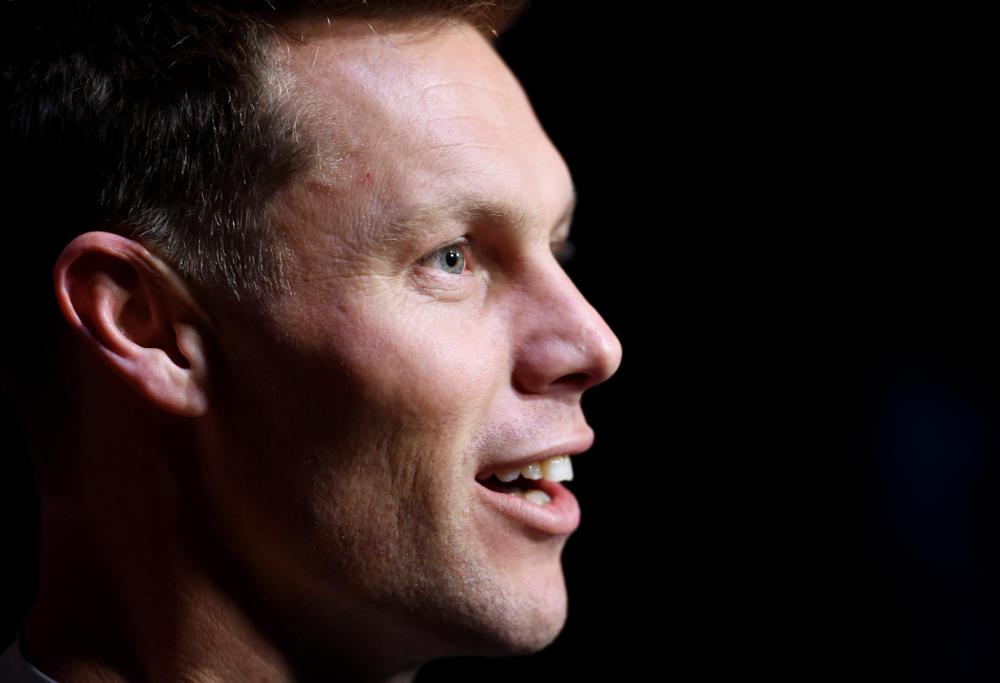 17. Joel Selwood (Geelong Cats)
I am morally opposed to voting for Joel Selwood, but he still snuck into the Roar’s Top 20.

If there’s one thing Selwood is very good at, it’s milking free-kicks. It’s his best skill. He is the best player in the history of the game, if the game was inviting contact to your head or neck. And bleeding easily from the face.

I may be completely off-base here. Geelong fans tell me he’s not just a neck who gets frees. He’s an inspiring captain. An intelligent playmaker. Selwood is a possession getter, who can also hurt you by hitting up the open man or kicking the goal himself.

It’s not up for debate, they say. There’s a whole decade of football as evidence. He’s not just a ducker. He’s also a very good footballer.

American singer Chris Brown has released seven studio albums, five mixtapes, one hundred and eight singles (including sixty-six as a featured artist) and nine promotional singles. As of 2016, he has garnered 43 top 40 entries on the Billboard Hot 100, and 83 total entries in the chart.

16. Rory Sloane (Adelaide Crows)
Rory Sloane and Patrick Dangerfield were so good together.

Now Patrick Dangerfield has left for Geelong and Joel Selwood. He seems happier, more confident. He’s now part of celebrity couple ‘Dangerwood’. There are reports he is about to start a family. Congratulations to the happy couple.

Losing Dangerfield has had its benefits. The Crows found cap space to sign Paul Seedsman, retain Josh Jenkins and may have enough left over to keep Mitch McGovern too.

Meanwhile, Sloane has been destined to an Aniston-like fate: great hair and a revolving door of potential partners. The Crouch brothers? Richard Douglas? Cam Ellis-Yolmen has just done his ACL. None will be like Pat.

A British survey of 4000 workers, showed 16 per cent of respondents reported seeing co-workers take sick leave due to the stress or anguish of a breakup, while 15 per cent said separation or divorce had a negative impact on productivity.

I’m rooting for Rory Sloane. The loss of Dangerfield was devastating, but a strong independent on-baller don’t need no man. 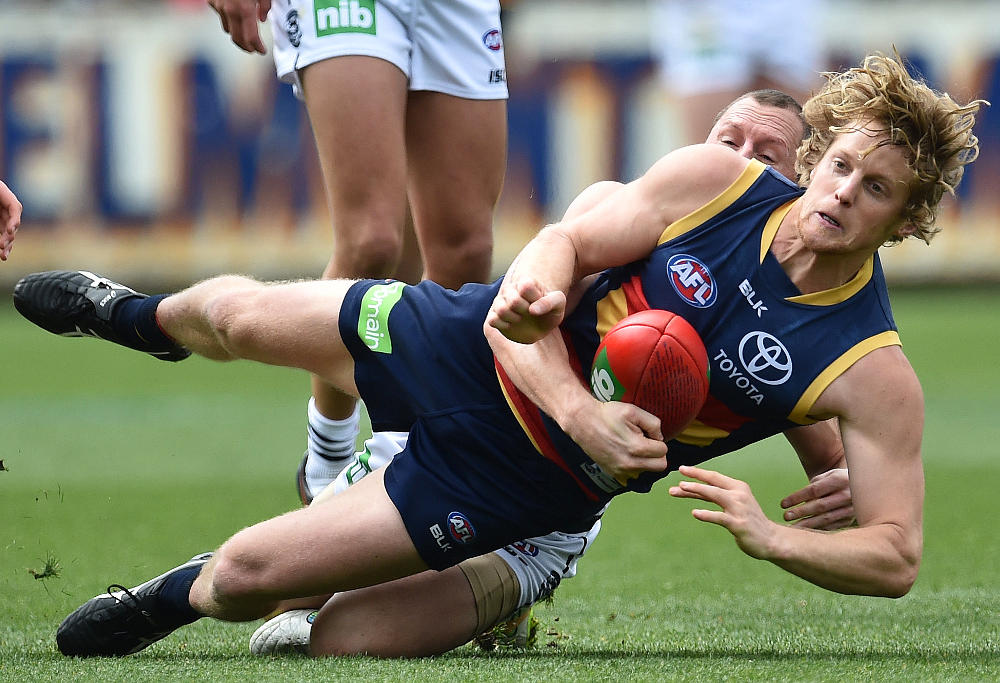 If Major League baseball is any indication, the three-time club champion probably isn’t going to get any better, which would be alarming. But he is going to get paid.

A study by Cornaglia and Feldman (2011) directly measured the impact of marriage on productivity, using a sample of professional baseball players from 1871 – 2007.

After a breakout year in 2014, Gray has been consistently racking up elite numbers in the midfield. A top ten contested possession and clearance player, Gray has the capacity to be a multiple-goal kicker on his night.

Unfortunately, the only exciting thing Port Adelaide have going is a school excursion to China. Make that paper, Robbie Gray.

Eddie’s magic, they say. Eddie has eyes on the back of his head, they say. Eddie defies physics. Eddie turns water into wine. Eddie gave a blind man sight. Then they go back to their lives like this sort of Next Testament stuff is normal.

Writer Arthur C. Clarke’s once said that any sufficiently advanced technology is indistinguishable from magic.

See, Eddie Betts is criminally misunderstood. He’s just seen as a whimsical freak. But when you take into account the dozens- the hundreds of minor calculations Eddie performs in a game, he has to be considered in the top handful of technical players in the game.

In the above sequence, Betts has to modulate his pace with respect to erratic bounce of the Sherrin. Then he has to be calculate his distance to the boundary, whilst simultaneously choosing the right evasive action against his man.

He then has to accelerate enough to beat a second defender, look up to see no forward options, then make the decision to kick for goal under duress. He has to kick straight too, a career defining skill by itself.

That’s ten seconds. Eddie he does it multiple times, game after game. Eddie Betts is a very consistent player. He only went goalless 2 out of 25 games last season, finishing the season with 3.12 goals per game.

This is not just a talented forward. This is a supercomputer.

13. Joshua J. Kennedy (West Coast Eagles)
Joshua J. (Wikipedia tells me the ‘J’ stands for Josh) Kennedy is the perfect tall forward. Good below his knees, mobile across the arc, and a great contested mark.

This season, Kennedy will have Priddis, Shuey, Gaff and now Sam Mitchell feeding him.

This is your fact:

Joshua J. Kennedy is currently paying 3.50 to win the Coleman. 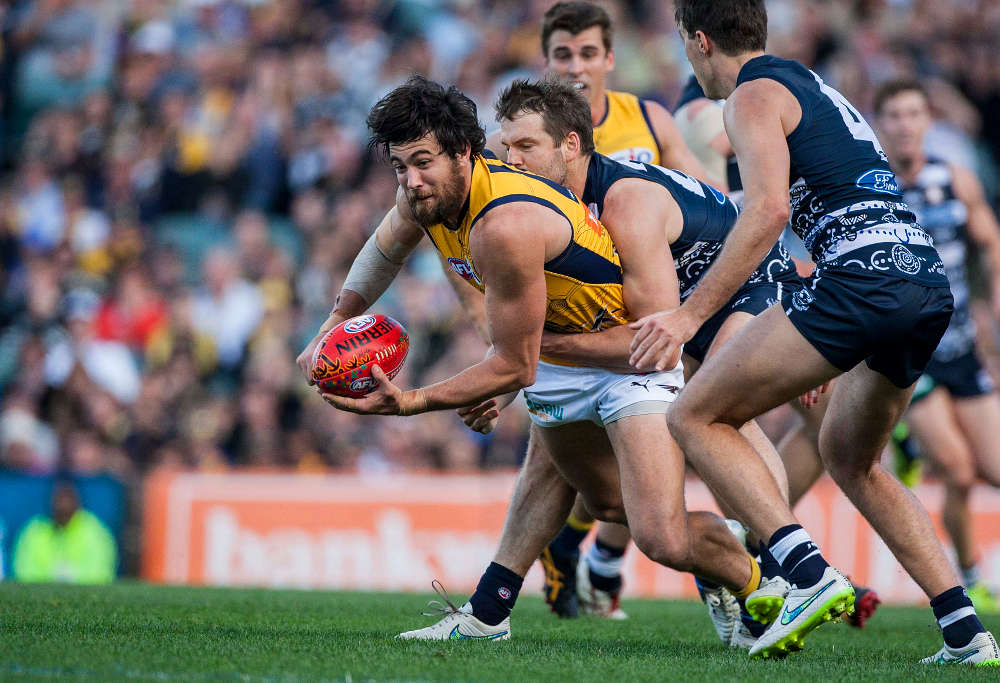 12. Cyril Rioli (Hawthorn)
In November 2016, a diver was looking for sea cucumbers off the western coast of Canada. The diver, Sean Smyrichinsky, claimed he found a nuclear weapon instead.

A ‘broken arrow’ is what the U.S. Department Of Defense calls a lost nuclear weapon. There are eight nuclear weapons currently unaccounted for. They have the combined power of 2,200 Hiroshima bombs.

They could detonate at any time. If they all go off, it’s not just anarchy. It’s. Just. Over.

Every week, Hawthorn field their own broken arrow, Cyril Rioli, somewhere in the forward pocket. He can go missing for long stretches.

But if Cyril goes off, that’s the game.

I’m sorry you guys were chipping it around half-back, constructing entries patiently for three quarters. You were doing the right thing, honestly. Up two goals with virtually no time left. I’m proud of you. You lot would have won the Grand Final too, had you got there.

But Cyril just detonated. He’s just kicked four goals on you in three minutes. That’s right, you just lost. You spent twenty-three games and three quarters sticking to structures. Now you’re packing for Bali in September. Have a great holiday. I’ll watch out for you on Instagram.

Is it his secret to success? No. It’s his freakish height and length, coupled with the game’s current and tenuous interpretation of what a ruckman is/allowed to do. He’s the right length at the right time.

But let’s pretend it’s his beard.

This is a photo of draft era Max Gawn. He has no beard, which means that he can’t play football.

This is (a) Max Gawn and (b) a standard Australian size door. pic.twitter.com/nb6eA5uK85

I looked up photos from 2014-2016, choosing photos that featured the full width of his face.

Assuming the width of his face stays constant (a fair assumption in a skeletally mature male), we can then work out the length of his beard. 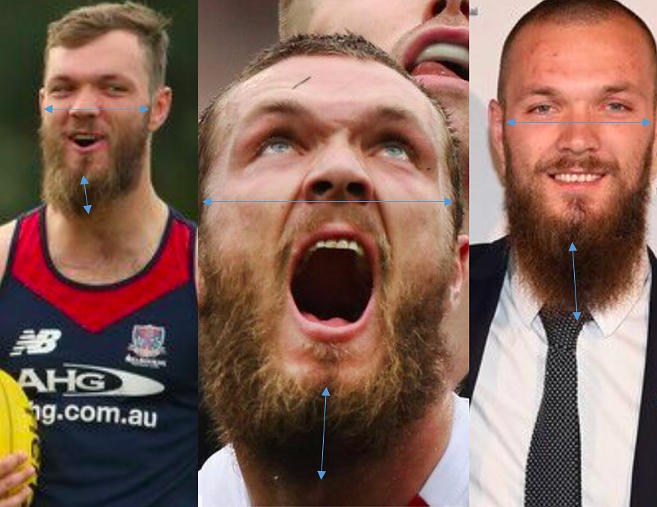 Cross-referencing that with hitouts per game, we have: 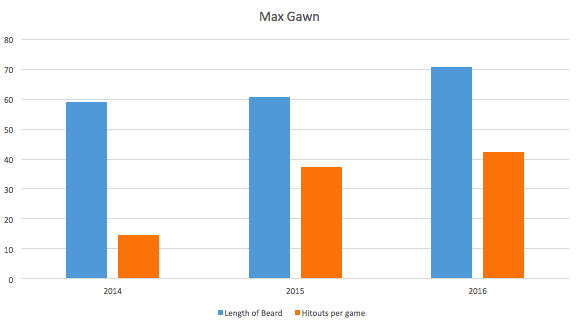 This shows a correlation between beard length and hitouts per game. Correlation doesn’t imply causality. Is it the beard that brought the hitouts? Or is it the hitouts that made the beard grow?

Only the best sportswriters use stats.