Where in the world are all of Australia's strikers?

The latest Socceroos squad was released a few days go, and at first glance had as much striking power as cash-in-hand welder traversing down a half-built Emirati stadium.

Tomi Juric and Tim Cahill are the only recognised strikers in the squad; Cahill is 36, and Juric has scored four international goals since 2013.

The present dearth has hardly crept up on us, and yet has nonetheless prompted misty-eyed trips down memory lane, through the pleasant sunset bridleways of Viduka, the slightly unkempt towpaths of Aloisi, and the scraggy back-alleys of Zdrilic.

So, before we all get lost in endless YouTube remixes of that penalty, or a young, rotund Dukes at Leeds, it might be useful to actually have a look at where all of Australia’s apparently absent strikers are playing in the world.

The conveyor belt that has delivered such paltry goods over the last ten years isn’t as empty as you think, it’s just so many products on it are out of sight and, thus, out of mind.

Let’s start with some of the more well known names:

Apostolos Giannou, the subject of a now-seemingly abandoned national team experiment, is in China, at Guangzhou R&F. Having played consistently at Asteras Tripoli in the Greek Super League last season, Giannou has been excluded from the Guangzhou squad for the first two games of the new CSL season.

Nathan Burns is in the J-League, with Tokyo, as has been since July 2015. He has not been in the squad so far this season, which is only three games in, and only rarely played the full 90 minutes for Tokyo last season. He is 28, and has 3 goals in 24 appearances for the national team. He has been fairly useful as an impact substitute recently, although not enough to earn a call up for the next round of qualifiers. 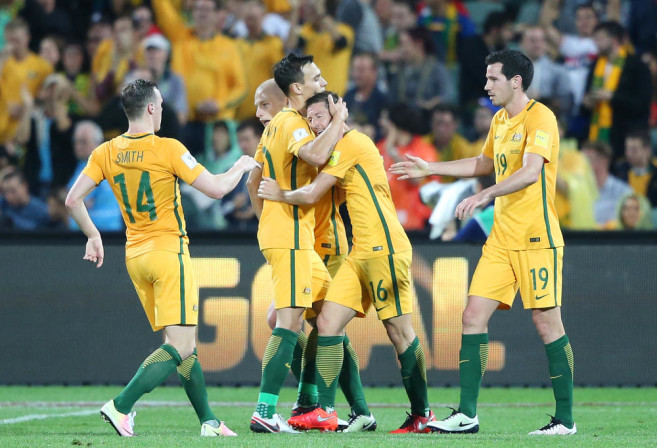 Bruce Djite is with Suwon FC, in the Korean second division, the K-League Challenge. His team is one game into the 2017 season, and he, alongside countryman Adrian Leijer, are hoping to secure promotion back to the top division. He has made nine appearances for the national team, but his last appearance came in 2010; it’s extremely unlikely he’ll earn a tenth.

And then, for old time’s sake, Scott McDonald, 33 years young, is still playing and scoring in Scotland. He has seven goals and five assists in the Scottish Premier League for Motherwell, and has started all but one of their 26 fixtures so far this season. He averaged roughly a goal every three games for the Northern Lanarkshire club when he played for them between 2003 and 2007, and has now been shepherding the leather into the net at a higher strike rate for them for the past three seasons. Having scored 185 goals over 550 club appearances, in Scotland and England, McDonald has never scored for his country, in 24 caps.

But what about some youngsters, yes, that’s the sort of spirit-bolstering stuff we need to hear about right now. A whole platoon of them, standing tall and playing well, I imagine, rows of young, sinewy Aussie lads, waiting in the wings? No, not yet, let’s get some of the weirder leagues out of the way:

Having previously been involved in the Nottingham Forest and Swansea youth set-ups, 21 year old striker James Dimitriou is now employed by Cypriot club Karmiotissa. Karmiotissa are tenth in the Cyrpus First Division, and Dimitriou has appeared just once for them, 26 games into the season.

After being released from Melbourne City in January last year, David Williams can now be found playing in Hungary, for Szombathelyi Haladás, who are sixth in the league. He is doing very handsomely over there, and scored a brace in his last match to take his goal tally to six for the season, garnished with two assists.

Originally a Perth product, and one who played for the Glory before moving to FC Twente in 2009, Nikita Rukavitsya has since bounced around the Dutch and German leagues, briefly stopped over in Western Sydney, and is now playing in the Israeli first division. His Maccabi Haifa team are sixth, and he has made ten league appearances for them this season, although none since December last year.

Alright, now we get to the good stuff, the real up-and-comers. There are more than you might think, but here are just a few, all keen youngsters well-placed in handsome teams around Europe:

Ben Folami, born in 1999, is currently in the Ipswich Town youth set-up, and is going along nicely. He has scored 9 goals in 13 youth appearances this season, including a brace against Colchester United’s U18s. Born in New South Wales, Folami is quickly making a name for himself in Suffolk.

Stefan Valentini is currently slogging away in the fourth tier of German football, in the reserve side of second-division outfit Eintracht Braunschweig. He has played in all but four of his team’s 25 fixtures this season, and has scored twice. Born in Perth, and having appeared for the Glory in the FFA Cup in, Valentini won the 2015 Dylan Tombides Young Player of the Year Award at the end of the 2015 NPL season.

Although more of a left winger than a striker, Reno Piscopo, an 18 year old Melbourne native, moved from the Inter Milan youth set-up to Torino’s youth team in January this year. He is yet to score for his new team, in the Primavera Girone B – the Italian youth league – but has been rewarded with significantly more game time, starting all of Torino’s youth matches since arriving. The Italian leagues are a superb nursery for attackers, playing as they must at a slower pace against extremely well-drilled defences.

Nykodah Smith is in Brazil with Botafogo, Mitchell Duke is in Japan with Shimizu S-Pulse, we even have a striker, Richard Porta, born in Fairfield Hospital, who was spirited away to Uruguay at age 1, and now plays for Montevideo’s River Plate.

There are Australian strikers out there; probably not better than Juric or Cahill, but they’re there, young and old, playing in locales both exotic and mundane, all trying to kick a ball into a net. What’s the point of all this research? Well, it’s a split round, innit?