The most frustrating team in the NRL

Here’s a hot tip: it isn’t the Warriors.

Ladies and gentlemen, I give you the newest contender for most frustrating NRL team – the Wests Tigers.

For a team fielding ‘young superstars’ and the ‘next big things’ in the NRL, they sure know how to disappoint.

One week they’re superstars, the next four they’re wooden spoon contenders, and it all starts with their younger players who aren’t pulling their weight.

The only one I can’t really fault is fullback James Tedesco, who always puts in 100 per cent every time he pulls on the jersey, and is in fact one of the best in the competition. It is imperative the club re-sign this future NSW and Australian fullback.

But it’s the likes of Mitchell Moses and Luke Brooks who are frustrating to watch.

Now I can’t entirely blame the halves for the 40-point loss to the Raiders, the forwards have to take the brunt of criticism as well. They got dominated by Canberra’s monstrous pack and couldn’t recover.

For a while however, the mobile engine room the Tigers fielded was doing well at exposing the size of the Raiders’ forwards, getting quick play the balls and catching the opposition off guard and offside.

But some of the decision making and fifth tackle options of the Tigers is left to be desired. Brooks and Moses have not only played together throughout their entire footy careers, juniors included, but they’ve now been paired for the last two and a half years in the top grade.

It was evident in the last two weeks that the Tigers’ halves couldn’t organise a root in a brothel, with the team piling on just eight points in the last fortnight, a penalty goal and an intercept try.

It’s frustrating as a rugby league fan to see these highly touted youngsters not putting in.

They just don’t seem to care knowing that the club will shell out whatever money they have so they can ‘live up to their potential’. 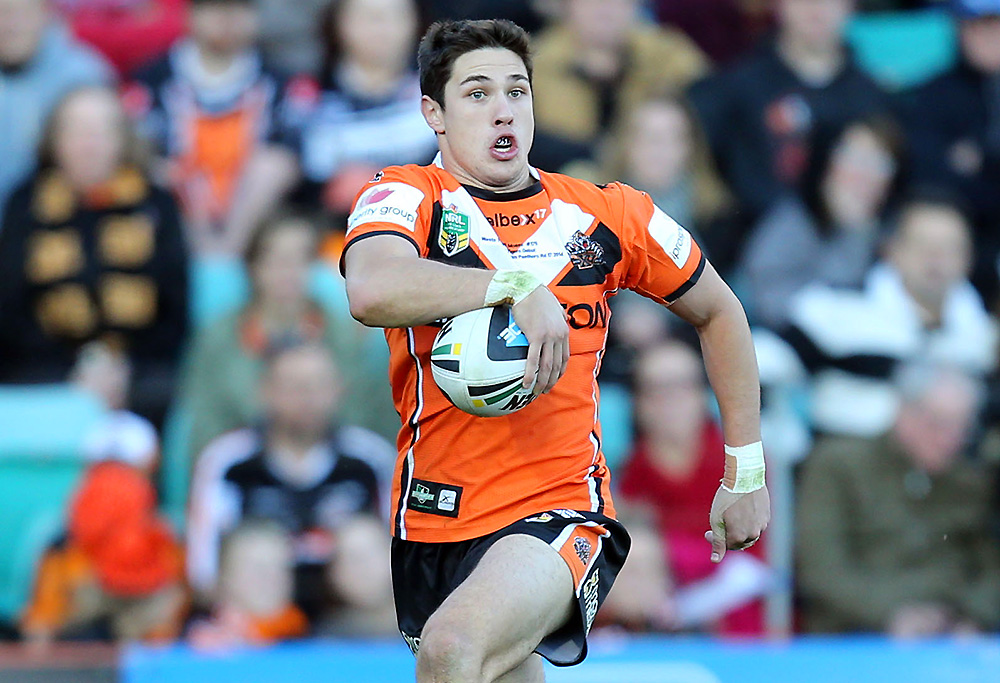 The idea that these guys are commanding upwards of $800,000 is ludicrous.

I know he’s only a few games in and 18 years old but Moses Suli clearly showed why he isn’t ready for the NRL lining up against Jordan Rapana, where he made some costly errors.

The rookie looked like he wanted to be home during the pre-match warm up, and I don’t blame him. To shell out over $300,000 for a kid who had previously played only a total of one NYC game is ridiculous.

For those who’ve heard me rant about the Tigers already, I think they need two things; a hulking backrower and an experienced, steadying halfback. They need to be smarter with recruitment, but instead they throw their money around to whoever thinks they can do the job.

The likes of Dale Finucane, Luke Lewis, Ryan Hoffman, Alex Glenn and Jason Taumalolo are off contract and just the type of players they need in the backrow, which hasn’t been the same since English sensation Gareth Ellis left in 2013.

There aren’t many options in the halves but Josh Reynolds and Tyrone Roberts would be decent acquisitions and at least are capable of steering around a side. The only other option is Johnathan Thurston and I’d be willing to to bet my organs he won’t be wearing black white and orange next year.

The club needs to choose between Luke Brooks and Mitchell Moses. They can’t afford to have both on board with the poor results and what could be.

These are the same guys who went missing in Round 26 last year when their team needed them the most.

I know it’s only Round 3 but It’s frustrating as a rugby league fan to see the Tigers play so poorly for so long, but they need to learn not to throw all their eggs into one basket and recruit accordingly.

I’d love to see the Tigers live up to the glory days of the mid 2000s and early 2010s again, because they were such great entertainers, but I can’t see it anytime soon with the way they’re going. I’ll be more than happy to see them prove me wrong, though.