From incorrect calls from the bunker, forward passes deciding the outcome, and players failing to be sent from the field, Round 3 was marred by poor refereeing.

The Bunnies should have been reduced to 12 men permanently against the Knights, when George Burgess was sin binned in the first half for his UFC-style elbow to an opponent’s face.

They also received favourable treatment relating to a late scrum that should have been reset – instead it resulted in the sin binning of Knights skipper Trent Hodkinson (for dissent) at a crucial late stage.

The biggest change for Souths is the excellent Cody Walker being shifted from five-eighth to fullback, which in turn moves Alex Johnston to the wing, and big body John Sutton into a play-making role.

Anthony Cherrington, the once-prodigous Roosters junior – and the only man with worse knee joints than myself – has been named in first grade for the first time since 2012.

The Roosters similarly were gifted two points by officials, scoring the match-winning try off a blatant forward pass. There were also huge question marks over one of the final tackles of the game, when Panthers utility Tyrone Peachey was collared a metre from the try line in the dying seconds.

That said, the Roosters are flying high as one of only two undefeated teams and have named an unchanged line-up from last week’s victorious team.

Panthers vs Knights
Ah, how fate plays out. The second match of Round 4 features the two sides who copped the brunt of poor officiating.

Bryce Cartwright returns from an ankle injury, but will need to rein in some of his brash offloads.

The Knights have named the same 17 from Round 3 and have proven over the opening weeks that they are a fiercely competitive side.

Penrith will get the cash but don’t expect a blow-out. 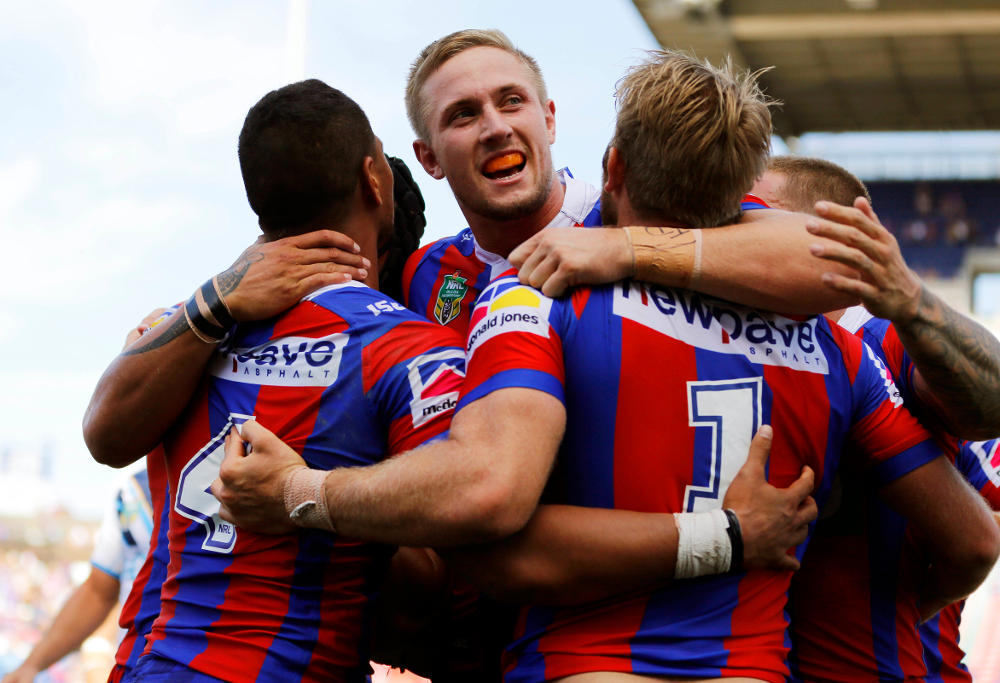 Broncos vs Raiders
This clash is the match of the round – and fully deserving of Brisbane’s reserved Friday night slot.

The Broncos will be smarting, following two narrow losses, and keen to get back on the proverbial horse in front of a huge home crowd. The return of Tevita Pangai Jr will lift them, and don’t be surprised if Benji Marshall makes the final 17.

The Raiders finally recorded their first victory of 2017 after falling to the respective premiers of the past two seasons. But, while Canberra were impressive in Round 3, the abysmal performance of the Tigers was the more telling tale.

Both teams are too good to start their season at 1-3 but I can hardly tip a draw.

Manly vs Bulldogs
This one is a tipster’s nightmare. In Rounds 1 and 2, Manly looked sure things for the wooden spoon.

Come Round 3 and they delivered the Cowboys a savage dose of their own medicine at 1300 Smiles Stadium, arguably the toughest road trip in the NRL. More impressively, they did it missing some serious forward power. However, even Blind Freddy could see that it was one of those days for the Cowboys where absolutely nothing clicked.

The Bulldogs showed incredible defensive resolve to repel a Warriors side which had plenty of ball. But, like Manly, they realistically were not forced to answer many questions from a poor attacking performance from the Auckland club.

The Dogs will play a gritty, forward-dominated game, but Manly can offset this with Martin Taupau and Addin Fonua-Blake returning to the team.

Parramatta vs Sharks
Corey Norman has quietly become the most pivotal player to a club’s fortunes in the NRL.

Against the Titans, the Eels looked a shadow of the side that started the season 2-0. They were always going to lack direction without their halfback, but what transpired would have shocked plenty.

Punters would have also been shocked to see the Sharks sink when they were supposed to swim against the Dragons, but the Red V were gritty and frustrated the premiers.

James Segeyaro has been named on an extended bench and it is likely he will make the final 17 come Saturday.

The Eels play their first ‘home’ game of the season in this fixture, at ANZ Stadium, and while their record is poor at the venue I’m backing them to bounce back into form.

Titans vs Cowboys
The Titans enjoyed their first victory from their last six starts, which doubled as their first win of 2017. It was a courageous victory, due to ridiculous injury total suffered before and during the match.

They seem far less affected for Round 4, despite having suffered further injuries. Daniel Vidot has overcome early-season injuries to make his club debut and Dale Copley, who was released from the Roosters, will slot into the centres. Both players are genuine first graders, so this is a stronger line-up than Round 3.

Last week, the Cowboys had an extremely off day.

You would expect a side featuring a halves combination of Johnathan Thurston and Michael Morgan to bounce back, and with a livewire backline including Kalyn Ponga and Gideo Gela-Mosby there are points in this outfit.

I’m backing the Cowboys here but this is the tip I am least sure about. If the Titans play through the middle they will get the upset.

Tigers vs Storm
Let’s sum up the Tigers week with one word: WTF. Ok, it’s an acronym, but it’s certainly the most applicable term I can apply to this club.

Without getting too entrenched in the politics of Jason Taylor’s sacking, it is important to remember that most teams pick up a win after two events: a thrashing and the week after their coach is sacked. Let’s also remember they are playing at fortress Leichardt.

Under those circumstances and given the likelihood of a ‘caution to the wind’ strategic approach, the Tigers would actually be a smart money bet.

Until of course you remember they are playing the exact opposite of themselves – a well-drilled, professional, premiership contender in the form of the Melbourne Storm. The Storm can also be summed up with an acronym – BCC: Billy, Cooper and Cameron.

The Tigers could well cause an upset but it would take balls of steels coated with granite to back them.

Dragons vs Warriors
The Dragons are perhaps the biggest surprise packet of 2017. Many picked them as the only true contender with Newcastle for the wooden spoon and yet they sit third on the ladder with a 2-1 record and a healthy differential.

They performed strongly against the Sharks and really frustrated their opposition. It was controlled and disciplined play from the Dragons.

The Warriors don’t know the meaning of control or discipline, however they did almost succeed in boring me to death against the Dogs with arguably the most inept attacking ‘display’ of the season.

Roger Tuivasa-Sheck returns and Kieran Foran could well be a late inclusion at five-eighth. If Foran suits up, the Warriors should win, but the Dragons love playing in Wollongong and the Aucklanders are poor travellers.