Excellence is nothing new for the San Antonio Spurs. With yet another 60+ win season in the books and a 20th consecutive playoff berth confirmed weeks ago, the Spurs are a franchise that have epitomised winning for two decades.

Greg Popovic has achieved this remarkable period of success with a basketball philosophy which promotes defensive excellency, sharing the basketball and the importance of the team over the individual. Manu Ginobili exemplifies all three of these values.

Ginobli is one of only two players to win an NBA Championship a EuroLeague Championship and an Olympic gold medal. There are very few players to have ever played the game who have such a complete basketball resume.

What is amazing about Ginobili’s career is that he has achieved all these personal accolades by sacrificing his own numbers for the benefit of his team. 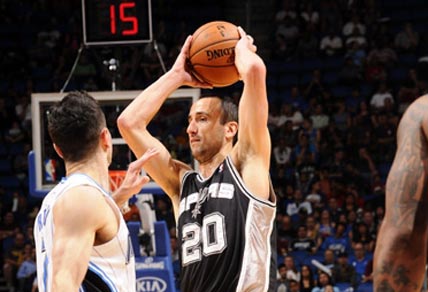 Ginobili’s career NBA stats are unspectacular. He has averaged 15 points, four assists and four rebounds over his 14 seasons in the league. However, the story the stats don’t tell is that every single thing Ginobili does is to help his team win.

There is no question that Ginobli could have started for most of his years with the Spurs, he could have probably averaged over 20 points per game for most of career and he certainly could have been the number one guy on another NBA team. But that is not what Ginobili is about he is focused on winning.

Manu has left his ego at the door and done whatever was necessary for the team. Whether that was coming of the bench to provide San Antonio’s second unit with an experienced leader or playing with the starters. Whether it was being the teams primary scorer or being a facilitator through which the Spurs ran the offence. Ginobili has always put the good of the team over his personal statistics and he has reaped the benefits.

This is not to say that he is incapable of taking over a game. In what was arguably the finest moment of his career Ginobili scored 29 points as Argentina completed a famous victory over the USA in the Olympic semi-final in 2004. It was the basketball equivelant of the rebel alliance destroying the death star and Manu was Luke Skywalker making the impossible shot.

Watching Ginobili play in that game is pure and unadulterated joy; he is absolutely everywhere. Splashing three pointers, threading bounce passes, crashing in for rebounds and orchestrating fast breaks with deadly precision. In what is arguably the greatest upset in the history of international basketball Ginobili is the architect who brought basketball’s most powerful nation to it’s knees.

How will Ginobili be remembered? As one of basketball greatest team players, as one of the finest international players to grace the NBA or as the ‘other guy’ on some of the greatest teams in NBA history?

His personal stats may not rival those of Dirk Nowitzki, Hakeem Olajuwon or even his Spurs teammate Tony Parker but Ginobili has achieved things that none of those all time greats have. He has had success in Europe, internationally and in the NBA showcasing just how adaptable his game is.

Ginobili is one of the greatest winners in basketball history and he should be remembered as one of the finest international players to ever play the game.