Entering the Rory Realm in Adelaide

It’s no secret that the Adelaide Crows are good. When you are sitting at 6-0 on top of the ladder and have managed to knock off three of the teams directly beneath you there is really no reason for anyone to doubt your ability.

There is really no reason to doubt yourself. The Crows are a humble outfit led by an inspirational and imposing captain in Taylor Walker. Walker though doesn’t stand alone, showstoppers like Eddie Betts and Charlie Cameron and a workhorse ruckman named Sam Jacobs paired with a backline littered with star potential has seen Adelaide soar above expectation in 2017.

Those names don’t even begin to cover the weapons that Adelaide possess, but you know the names and the ability – and what I’m here to talk about is the Rory brigade. Rory Sloane, Rory Laird and Rory Atkins, three players who have each reached a new level in 2017.

For Sloane it meant going from an elite player to the favourite in the race for ‘Charlie’. For Laird it meant being one the most prolific metres-gained players in the competition and for Atkins it meant holding his own and slicing and dicing defensive structures with a surgical left foot.

Our first member Rory Atkins has played a mere 38 games at the senior level but he is fast gaining a lot of respect from other opponents around the league, as aforementioned Atkins surgical left foot and elusiveness are two of his more notable qualities.

Atkins has found himself in the top ten of two of the most appreciated statistics in our game, third in total inside 50s and sixth in total goal assists.

While we don’t have a measurement on speed, Atkins has plenty of it and his AFL ranking of ninth in total bounces per game shows that he’s not afraid to tuck the ball under the arm and turn on the jets.

If the Crows are to continue in their winning ways Atkins is going to be one of the main guys that we are looking for to continue his step up in production. 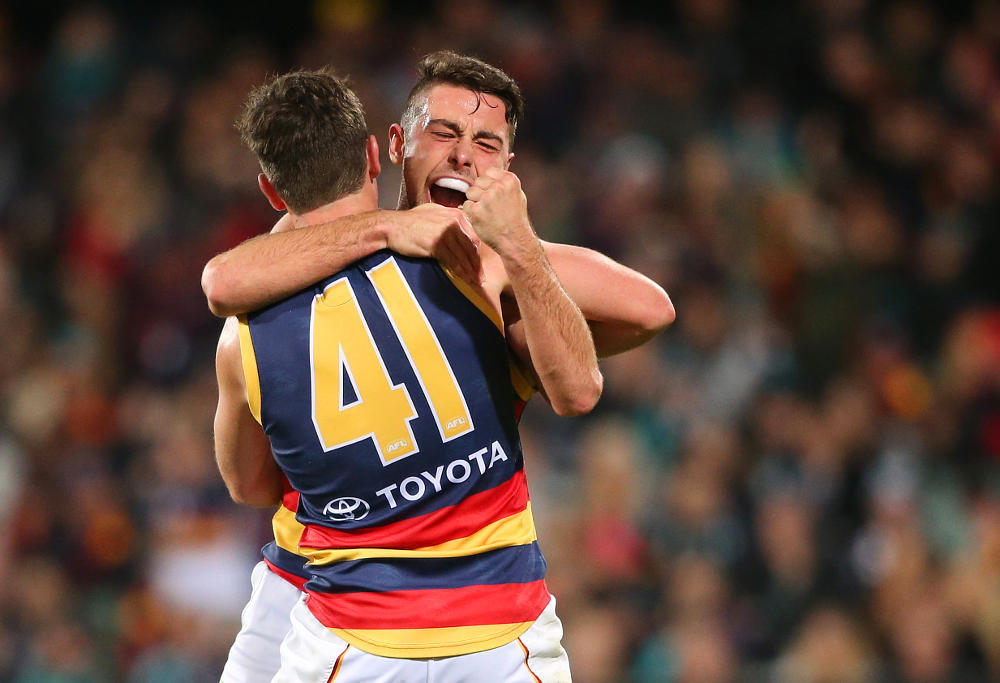 Secondly, we move onto Rory Laird. Now if Atkins has a surgical left foot then Laird has a doctorate in disposal. Laird who sits seventh in both total disposals and total disposals per game is quite frankly accumulating astounding numbers for a half back flanker.

Even more impressive is that despite his monstrous disposal output Laird sits first in disposal efficiency – competition wide. What I love most about Laird’s game though comes when he doesn’t have the ball.

In case you hadn’t noticed Rory Laird is just always there. Positionally he is a cut above, always in the area to get the feed from a contested ball and then have an easy uncontested disposal to the forwards charging through on the lead.

Shown by his ranking of second in total uncontested possessions per game, some of you right now may be thinking that sure it’s easy to be the most effective when you have next to no pressure on you. However, in this case, there’s no reason to attack Laird. He wins uncontested ball and makes the best use of it. If it comes down to it, he can be hard as nails and put himself in the way of anything.

Last but definitely not least we speak of the toughest and hardest-nosed footballer on the Adelaide list. At this point in time no player in the AFL is on Rory Sloane’s level.

Week in week out Sloane has been a unicorn walking among witches hats, a truly special output from one of the very best.

Looking at AFL rankings, Sloane is as a regular occurrence in the top ten. His best includes first in total tackles, third in contested possessions, third in clearances and tenth in effective disposals.

If he had any doubters against his ability, his performance against Richmond on Sunday night of 33 disposals, eight marks, eight tackles and three goals stamped them out very quickly.

There’s not a whole lot I can say about Sloane that you haven’t heard already. His dominant lead for the player’s association MVP and just about every major bookmaker in Australia making him favourite for the Brownlow tells you that I don’t stand alone in my opinion.

Three players don’t make a team and in Adelaide’s case there are far more than three having an impact, but when your team plays Adelaide next watch this trio and enter the Rory Realm.

Winless Adelaide have suffered another blow with captain Rory Sloane to miss up to six weeks of the AFL season because of a fractured thumb.

When AFL season 2020 is finally done and dusted, one team will hold the premiership cup aloft, 16 other clubs will reflect on what the hell just happened this year and then there’s the Adelaide Crows.