Round 7 in the AFL: When nothing makes sense, look for the little things

How did you do with your tips this weekend? In a round where almost nothing made sense, it’s harder than ever to sort signal from noise.

When that is the case, look for the little things.

Like Dale Thomas’ throwback individual moment of brilliance against a languid Collingwood.

In a round where everything got complicated, a simple moment, authored by Dale Thomas and a filthy sales job #AFL #goblues pic.twitter.com/RCFKiHodlp

It was the Pies’ special day, the game earmarked as a celebration of the club’s 125th anniversary. As AFL Media remarked after the game, choosing Round 7 against the old enemy probably seemed like a good idea at the time.

Thomas has been a regular target of the Hot Take Firing Squad this season, a secret trigger clause in his contract a source of great speculation. What’s clear is his football shelf life is limited, a wingman too slow and scratchy for the pacey precision demanded by AFL football in 2017.

His career highlight reel rivals the greats, but his time as a substantive contributor to a winning football team shortens by the week.

Yet here we were, on the first Saturday in May, with Thomas reminding us what he can do when things break right. What that clip doesn’t show is the beaming smile Thomas carried as he sprinted 100 metres from the scene of the filthiest sales job you’ll see on an AFL field this season to the bench.

A man under immense pressure, his football career a handful of bad kicks away from ending, doing what he’s done from day one.

Not a lot made sense in the weekend just past. Thomas adding to his highlight reel, breaking the back of a game against his old team on their special day, was a moment of levity amidst the chaos.

What to do? Look for the little things, the breadcrumbs that lead to greater meaning. There are a few to be followed, and a handful of narratives to bust along the way.

Like West Coast, the flat track bullies of the league, travelling to Adelaide Oval and winning by ten points. The Eagles had been raked over the coals for a month after two losses at the MCG – the second a spectacular failure against a spectacular failure. So the web was spun, and the Eagles were written off as this year’s great pretenders. 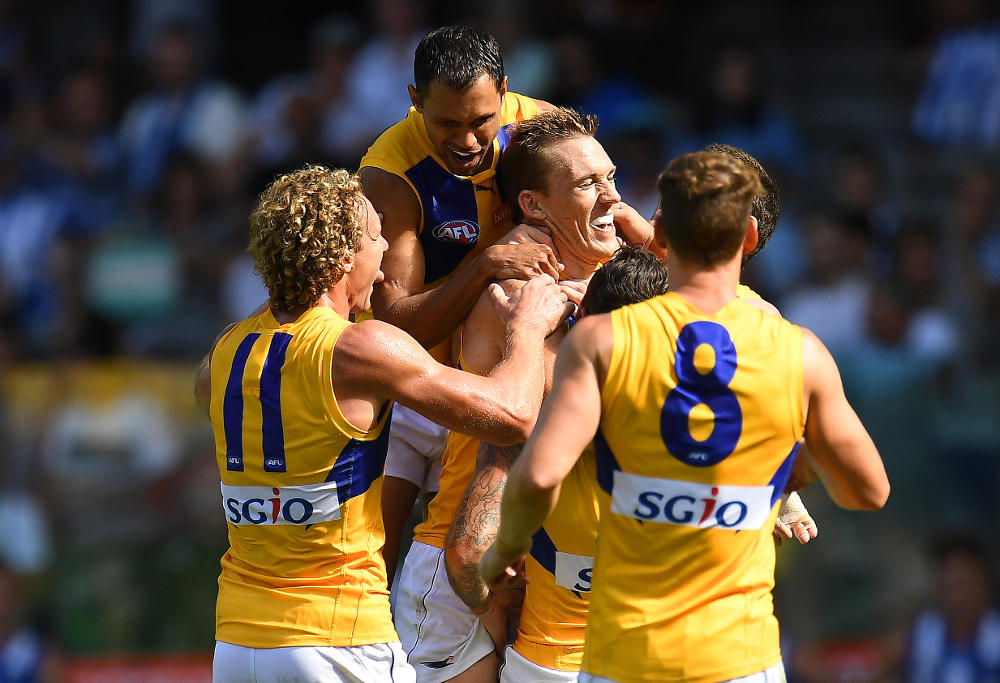 While it’s true that West Coast struggle to cope with the extra bandwidth of the home of football, it is also true that they are a fundamentally a strong team.

Last week, we waxed lyrical about Port Adelaide’s new-found strength, built on a relentlessness attack both to win the ball and use it efficiently. They brought this to bear against West Coast, winning stoppages for much of the game and powering forward with long kicks and overlap run.

The Power dominated the Eagles (276 uncontested possessions to 198 and winning time in possession by just shy of 11 minutes), pumping the ball inside 50 again and again.

Port Adelaide had 68 inside 50s to West Coast’s 39, and laid 12 tackles in their forward 50 to just one by the Eagles. The Power had 199 forward half disposals to West Coast’s 112. Their press was suffocating.

It paints the same, intriguing picture: Port Adelaide dominated West Coast on their home deck, as most thought they would. Except they didn’t.

The Eagles were focussed, and for one of the first times this year looked ready to neutralise an opposition that threatened often to run over the top of them. West Coast were organised and disciplined behind the ball, intercepting plenty of Port Adelaide attacks and counter-punching with quality disposals.

There were 36 contested marks in this game. The league average through six round was 25. 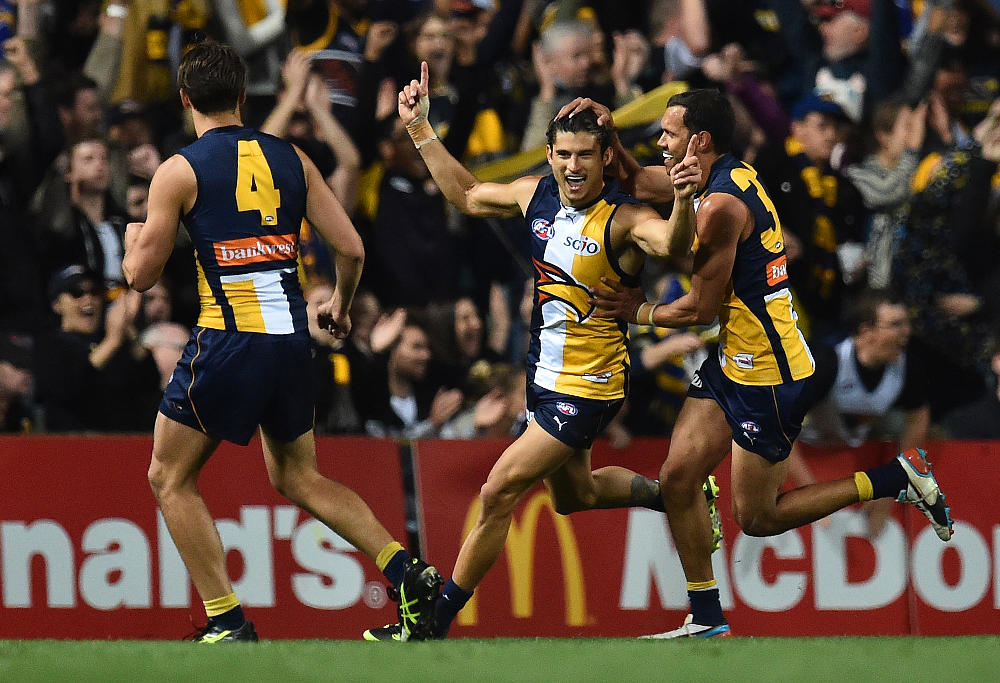 Unlike recent weeks, West Coast were far more deliberate with their transition from defence, eschewing the rushed kicks to packs of players on the wings or attempting to run the ball out with their lack of pace.

Instead, the Eagles were patient and allowed the play to develop with creative leads from their forwards. Josh Kennedy took nine marks, just two of them inside 50. Mark LeCras and Jack Darling were similar, with five and four marks respectively, and just two and one of those inside the stripe.

But when pace was required – when Port’s press broke down for half a second – West Coast were able to make it work with quick chains of handballs. The irony of this, of course, is they did so without the services of Lewis Jetta and Jamie Cripps, two of the fastest players on their list.

The Eagles turned 39 inside 50s into 97 points, leading from start to finish in an impressive performance on the road. Now 5-2 and in the top four after this weekend’s shenanigans, the Eagles face the Bulldogs on a Friday night, the Bombers at Etihad, and the Giants at Subiaco leading into a Round 11 bye.

St Kilda were another team with an unwanted tag coming into the round. Their pressure-heavy style had seen them blow a collective tyre for a quarter or more in every game they’d played in the season to date. In those moments, the Saints lost.

No so on Friday night. With the game delicately in the balance at three quarter time, many, including yours truly, expected them to fold. The Giants were the second best fourth quarter team in the competition through four rounds, with an average margin of 18 points in the final stanza. The Saints had given up an average margin of seven points. 11 points up, GWS were a shoe-in.

Nope. St Kilda’s midfield went to work, racked up 44 contested possessions to 31 and pumped the ball inside their scoring zone 16 times to eight in an emphatic performance. Across the park, the Saints stomped all over their opponents. Seb Ross won clearance after clearance, Blake Acres was outstanding in transition and inside 50, and Jack Stevens didn’t stop running.

The Saints have issues. Their forward half is generating mixed results, with a lack of continuity not helping. Their penchant for an extra defender leaves them vulnerable to the same tactic down the other end – ill-timed injuries to Adam Kennedy and Nathan Wilson (who was in the concussion assessment protocol from five minutes into the second quarter through to the start of the second half) didn’t help GWS in this regard.

But in their first Friday night win for almost six years, St Kilda showed they can mix it with the best teams in the competition. 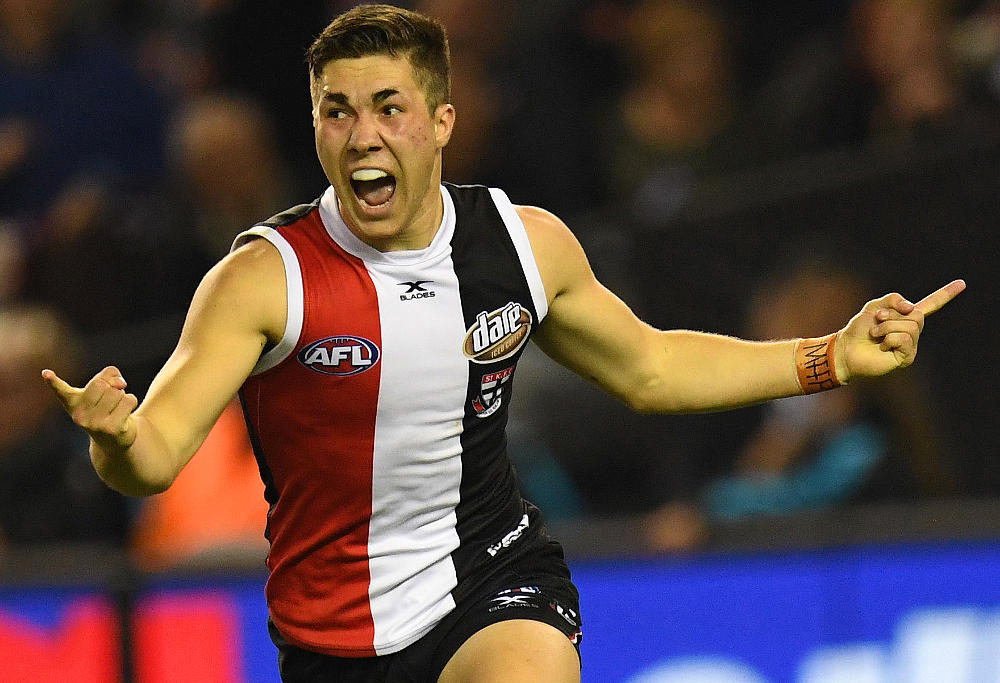 So can Richmond. Anecdotally, the cries of ‘who have they beaten?’ could be heard ringing around the outer of Etihad Stadium on Saturday evening as the Tigers travelled across town to face the Western Bulldogs.

As is their wont, the Dogs started slow, trialling their newly open stance across the ground and conceding every ruck contest bar one to Richmond.

It cost them 26 points of margin, which took a full three quarters to make up. Once the Dogs go feral, and they’re doing it earlier and earlier by the week, they eat other teams alive with their attack on the ball and will to move forward with short, sharp handballs.

The Tigers resisted right until the last, with their on-ball division holding up in the face of a six-man onslaught. Richmond won the aerial battle convincingly, with poor entries on account of the Dogs helping in this regard.

But what was most impressive was Richmond’s aggression with ball in hand from the back half – unafraid of the massing numbers confronting them across the centre of the ground.

Trent Cotchin, once again, inserted himself into the most important moments of the game, taking two critical intercept marks in the final five minutes as the Tigers leant into the Dogs’ press.

Dustin Martin executed the individual play of the year (to date) to set up Richmond's last goal in #AFLDogsTigers #gotiges #AFL pic.twitter.com/PQ0QSzeYiI

It set up the penultimate goal of the game, Richmond the benefactor of a missed illegal disposal call inside 50. The Tigers didn’t have to wait long for the make-up call; the controversial deliberate out of bounds decision paid against Jayden Short in the final minute was the final act of an excellent game of football.

‘At least it’s a talking point,’ the AFL executive is probably thinking as it works out how to get out of this problem it has created for itself.

For now, we can only hope when the time comes, our team’s unfortunate soul is able to cleanly gather a loose ball with three opponents bearing down in the forward pocket, with less than a minute remaining on the clock and less than a goal required for victory, lest an insufficient intent free kick be paid against him.

All we can do is laugh. And hope.

When nothing makes sense, look for the little things.

Vero provides market-leading insurance products and solutions to businesses of all sizes. Through specialist expertise and a results-focused mindset, Vero covers the risks today to help your business succeed so you can focus on your future. Ask your broker about Vero Insurance today.