Dear Super Netball, don't let the opportunity pass you by

The Doss
Roar Pro
8th May, 2017
11
Join the conversation
5959 Reads
Advertisement
Write for The Roar

It is a rarity in the world of netball, so much so that even the most adoring fan of Super Netball would be unsure if there is some sort of match review or tribunal process.

But make no mistake: the actions of Queensland Firebird Gretel Tippett were wrong, disgraceful and unsporting.

There were two missed opportunities on Saturday night of the doubleheader to address her actions, but they were not taken.

The first was the umpire simply giving her a warning and continuing play. The umpire should have recognised the severity of a deliberate two-handed push into the back of Jo Weston.

Under Super Netball rules, the umpire has the authority to suspend Tippett from the game for a period of time or exclude her from the game altogether. She chose not to apply any of these rules.

The second opportunity was missed by coach Roselee Jencke. The unsporting push occurred right in front of the Firebirds bench and was not missed by many. The former Diamonds player turned coach should have seen not only the utter frustration with her goal attack but how such an action needs to be removed from the game.

With many families and young netball hopefuls watching live and on their TV screens in prime time, she should have seized the opportunity to call a technical timeout and remove Tippett herself from the game. The OAM recipient has a responsibility for the welfare of all players and to ensure the integrity of the game at the highest level.

There is no doubt that both the umpire and Jencke would wish they had their time again after watching the replay.

Tippett’s antics are not an isolated incident. Commentator and former Diamonds Captain Liz Ellis commented during the match that Tippett ‘does that quite a bit’ and that ‘she takes players out and it gets dangerous’.

Ellis also went on to comment how Tippett is named in the Diamonds squad and how she needs to address her style and that she can’t push her way out of her frustrations.

So is there any good to come from this?

The actions of Jo Weston is certainly something to reflect on. Upon being pushed to the floor, any competitive athlete would no doubt spring back up and give back to their nemesis quick smart.

Not Jo Weston. Perhaps in shock of being slammed to the ground, she simply dusted herself off and continued playing. Much like her Vixens line-up, she showed poise, focus and the utmost professionalism.

Even in the post-match interview in which Weston was named MVP for the match, she wouldn’t buy into the incident, stating she simply did not want to talk about it. Her composure and level-headedness was remarkable, and she is the true role model for the sport.

It was only last year that Netball Australia teamed up with Samsung to develop the ‘Rethink Role Models’ campaign. In celebrating the determination and skill of women in sport, the campaign reflected on the stories of a number of Diamonds players. Chief executive of Netball Australia Kate Palmer said in her promotion of the campaign that, “Our Diamonds players show the utmost respect for their teammates and opposition, and that makes them the role models they are”.

Fortunately for all involved, Gretel Tippett was not one of the chosen Diamonds to be featured.

So where to now? All is not lost. Super Netball and the Queensland Firebirds still have an opportunity to address Tippet’s poor behaviour and unsporting conduct.

From a club level, the Firebirds could fine and ensure that a public apology is made by Tippett. I am sure they could also develop some in-house sanction for Tippett’s behaviour for not only painting her club but the game of netball itself in a poor light.

If the executives of Super Netball understood the importance of how this conduct is dealt with, they would also step in and ensure this sort of behaviour is not condoned. This family-friendly sport needs to maintain the highest levels of respect and integrity to ensure its continued success.

Finally, perhaps Gretel Tippett herself might draw this conclusion herself. Perhaps she might even read this article and reflect on it. 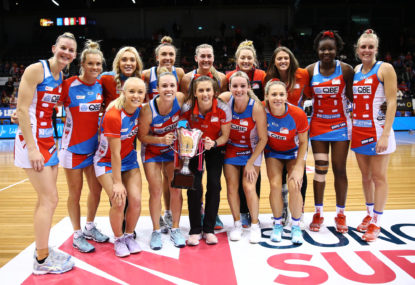