Stipe Miocic is on the verge of UFC heavyweight greatness

Justin Faux
Expert
15th May, 2017
2
Join the conversation
Advertisement
Write for The Roar

When Stipe Miocic punched Junior dos Santos’ lights out on Sunday, he gained membership to an exclusive club of the most successful heavyweight champs in UFC history.

Dos Santos, the offensive dynamo who handed Miocic his last pro defeat, didn’t even last two-and-a-half minutes in the Octagon with the baddest man on the planet at UFC 212.

Things were going exactly according to plan, right until they weren’t. A sledgehammer-like right-hand to the left ear stopped the Brazilian bomber in his tracks. A torrent of grounded strikes later, and Miocic had defended the UFC’s oldest championship for a second time, tying Randy Couture, Tim Sylvia, Brock Lesnar and Cain Velasquez for the most defenses in company history.

If the part-time firefighter, part-time cage fighter can defend his position on the throne once more he will be the greatest heavyweight champion in UFC history. On paper, at least.

The chance to etch your name into the history books is one that fuels some champions. Demetrious Johnson, the pound-for-pound king of the sport, tells anyone who will listen that he plans to break the all-time defenses record set by Anderson Silva.

To Johnson, the 125-pound kingpin who has ruled the division with an iron fist since its inception, breaking, or even shattering, that record gives fans and media no choice but to count him among the greatest ever.

Miocic seems far less interested in records or even legacies. Truth be told, he probably wouldn’t even be aware that he’s on the verge of heavyweight greatness if the media didn’t bring it up all the time.

“I really don’t care,” he said, almost uninterested in the question posed by a reporter at the post-fight press conference.

“I mean, yeah, if I keep winning, I’ll break history. Big deal. I’m just going to keep winning. I like winning. It’s fun. I like being called champ, especially.”

That care-free attitude is part of the champ’s charm. The gentle giant from Cleveland is far more likely to get emotional while discussing how his beloved Cavaliers, Browns, or Indians are faring than his own in-cage career.

Perhaps that nonchalant attitude towards fighting is his secret weapon, allowing him to crack skulls then crack smiles when it’s over.

Whatever the reason, it has worked, allowing Miocic to reach the top of the sport less than six years after his UFC debut at the mature age of 28. 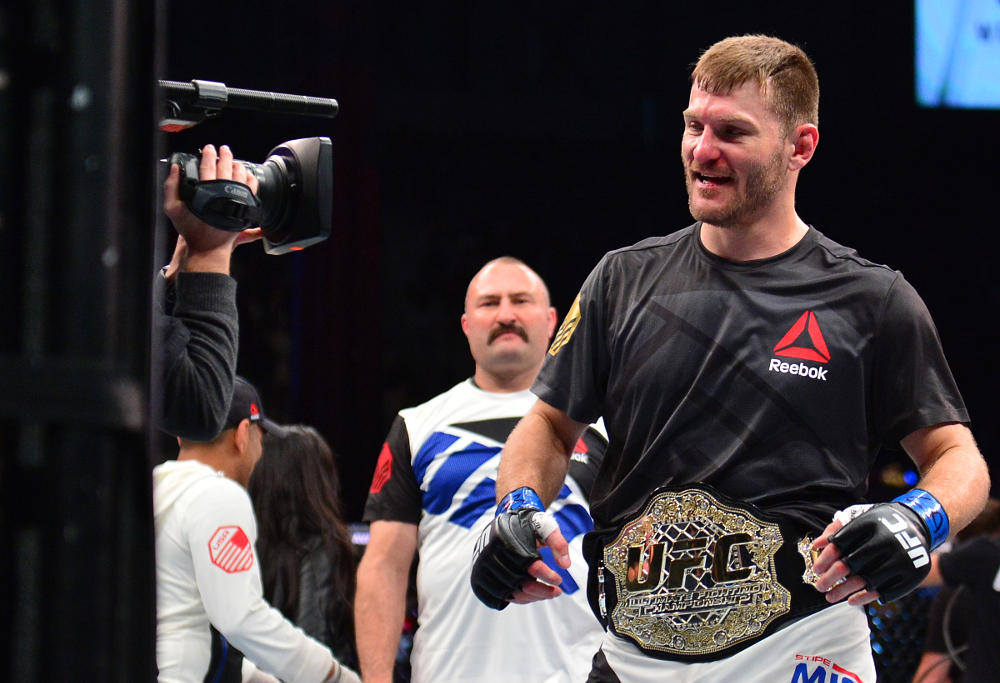 Now at the peak of his powers, Miocic is not only beating the best heavyweights of his era, he is running through them with ridiculous ease, knocking out Fabricio Werdum, Alistair Overeem, and now dos Santos in the first round.

The only truly great heavyweight on the roster that isn’t shown falling down after running face-first into the six-foot-four power punchers fist during the Miocic highlight reel is Velasquez, the Mexican-American power wrestler who has twice reigned as heavyweight king.

Many, myself included, put their money on Velasquez to be the first heavyweight to have a sustained period of dominance in the UFC’s glory division, but the American Kickboxing Academy star has struggled to stay healthy, let alone fight, during his times on top of the division.

The injury-riddled former king is the perfect fighter to challenge Miocic when he fights for history.

With another lightning-fast knockout win for Miocic – especially if it were against the battle-tested Velasquez – it would force a debate about where the 34-year-old king stands among MMA’s greatest big men, even if the champ will just shrug his enormous shoulders and roll his eyes.

Jubilant George Kambosos Jr is challenging Australia’s other title aspirants to follow their dreams overseas as he savours his place in boxing immortality as an undisputed world champion.