Brakes or not, AFL expansion is a long-haul drive

When it comes to expansion, the difference between the AFL and reactionary short-term knee-jerk panic merchants is that the AFL, when it has made the tough decision, will stay the course and see their commitment through.

They won’t cut and run at the first sign that it won’t be easy.

We’ve seen that before. It was tough for the Swans when they came to Sydney in 1982. Many wondered if they could survive.

There were many who questioned whether the AFL had any business being in Sydney. That the Swans were a waste of time and effort, and would never work.

In 1992, the AFL had the opportunity to kill the Swans off. They didn’t.

They stayed the course, and the rewards followed. Now the Swans are established and secure.
But it took a generation to get there.

Expansion of a league can be a controversial issue.

Gordon Smith’s article on The Roar earlier this week, while reflecting on AFLW not expanding to ten teams until 2019 and the AFL not introducing a Tasmanian team, also spoke of the AFL’s experiences to date with Gold Coast Suns and GWS Giants.

It lamented that the new clubs’ crowds weren’t as big as those of clubs in the code’s heartland that have been around for more than a century.

But of course the traditional heartland clubs didn’t become what they are overnight.

They were created, not by the tens of thousands of members they have today, but by a small group of visionaries. Small in number, but with a dream and a plan. They didn’t live to see their clubs become the powerhouses they are today.

None of the foundation members lived to see that milestone. They’d long departed this life. But their legacy lives on.

Records are scarce, but no doubt there were tough times in the early years. But if the Bulldogs had thrown in the towel in 1882 and dissolved themselves, much would have been lost from the game. 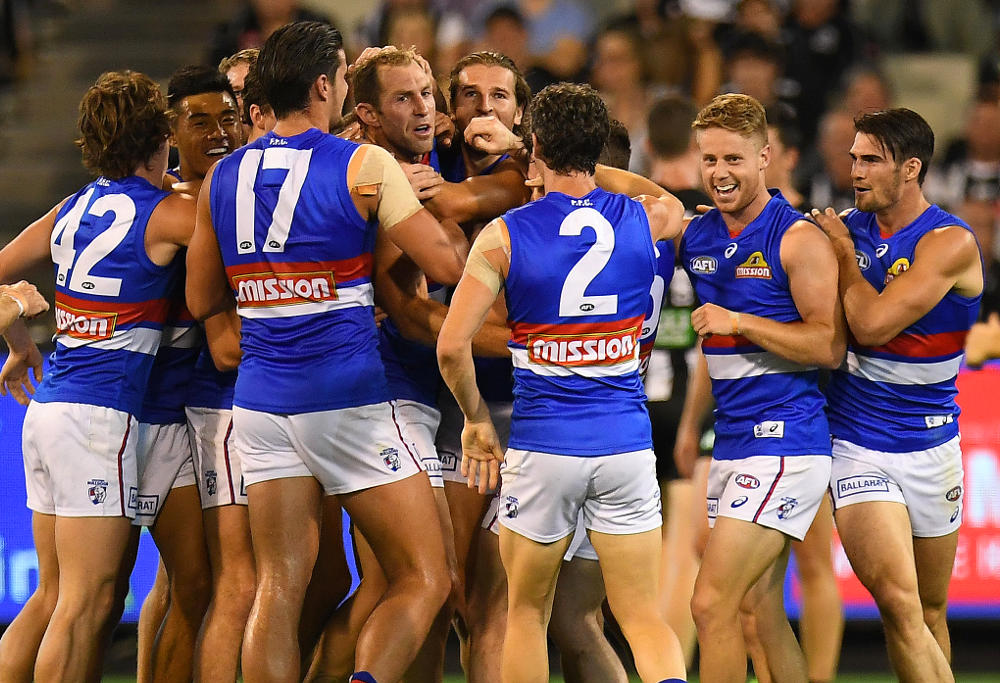 For the new clubs, the small group of visionaries are still alive. They’re coming from a long way behind, well over a century. But slowly catching up.

GWS Giants brought up 15,000 members for the first time last year. It took them five years to do what it took the Western Bulldogs 120 years to achieve.

Collingwood was created in 1892. What were their home crowds in 1897 and how do they compare with the crowds of GWS Giants today?

If the VFL had said that because Collingwood didn’t have 70,000 members and weren’t averaging 60,000 to their home games in 1897 that therefore they shouldn’t exist, the club and the game would never have become what they are today.

Expansion can’t be written off after a few years. And the AFL know that.

When the Giants club was launched, Andrew Demetriou explicitly stated that this was a commitment not just for two years or five years – but for 20 years, 50 years, as long as it takes. I know because I was there.

Nothing the AFL has said or done since has deviated from that theme. Because the AFL is committed to staying the course.

They won’t be throwing in the towel. Why would they?

In the overall scheme of things, the Giants’ crowds aren’t all that bad. They’re close to NRL crowds in Sydney.

Last Saturday’s Giants versus Richmond game at Spotless Stadium outdrew the NRL game at ANZ that was on immediately after. And that’s not an isolated case. In this day and age, the primary income driver of professional sport is not gate receipts but TV rights. And the AFL have that covered.

Any support the AFL provide to the Giants is coming out of a $2.5 billion TV rights package. When you’re getting that sort of money, you can afford to spend less than one per cent of it to grow the game.

With TV rights critical for the success of professional sport, the numbers that are of the most importance is not so much the attendance figure on the scoreboard in the last quarter, but the TV ratings that are published the next day.

With the Giants’ support contingent on TV rights, the Giants need to pull their weight with ratings – particularly in the pay-TV component.

Last Saturday’s Giants versus Richmond game drew a Fox rating of 271k. It was the highest-rating program on all of Foxtel for the day.

More often than not, the Giants game is the highest-Fox-rating AFL game for the day.

The Giants are paying for themselves several times over. Far from a black hole, they’re playing their part in bringing the TV dollars in.

Expansion is a long-term commitment, over a generation of more. Sadly, other codes haven’t had the means or the patience to last the course.

The Western Reds, South Queensland Crushers and Adelaide Rams are no more. Likewise North Queensland Fury and Gold Coast United. And a Super Rugby franchise will be gone next year.

And with those clubs gone, all the effort and expense that was put into establishing those clubs have gone. And the code’s presence in those places suffers.

Some clubs mismanaged, others swept away in a tide of change around the code. All not getting the support of the governing body; their short lives extinguished before they had the opportunity to fulfil their dreams.

When a league decides to expand, it needs to be a long-term commitment. An excellent piece by Stuart Thomas on The Roar earlier this week, entitled ‘It’s time for the FFA to dream, build a dam and forget the numbers‘ muses on the round-ball code’s expansion hopes.

The writer pleads with the FFA to have the vision to grow the game, to take the hit with low crowds in the early years for long-term gain – and to stay the course for a generation and longer.

In other words, to do what the AFL do with their expansion.

Obviously we’d love bigger crowds. But that takes time and money. It’s a long-term commitment.
When expanding to new horizons, the book has a simple message on the cover – ‘don’t panic’.

The AFL aren’t panicking. The Giants are here to stay.