Red faces at Suncorp taught a lesson in the basics

It is fast becoming a habit in Super Rugby – losing big at home. A couple of weeks ago the Waratahs shipped 40 points in front of their fans against the lowest-ranked team in New Zealand, the Blues.

This week the only other franchise in Australia immune from the grim reaper’s scythe, the Queensland Reds, went down 26-40 at home to the Western Force.

The Force players are fighting for their lives and their livelihoods, and it shows. With only two obvious ‘stars’, and with characters like Adam Coleman and Matt Hodgson in the forwards, they like to get down-and-dirty and draw their opponents into a scrap.

If the Force can pull you into the back-alley and make the game a contest of wills rather than skills, they know they will stand a better chance of winning.

Eight of the Force’s 12 Super Rugby matches this season have been decided by ten points or less, and the blow-outs (against the Crusaders in Round 4 and the Highlanders in Round 11) have been few and far between. Those are the only two occasions in which the Force have allowed themselves to be out-classed, and the skills discrepancy to become the decisive factor.

At Suncorp on Friday evening, a contest of wills and sheer tenacity was far too much for a brittle Reds team. If there is one area on the field which demonstrates your character, and the will to fight tooth-and-nail, more than any other then it is defence. The manner of defeat raised serious questions about the Reds’ lack of defensive backbone and organisation.

Following hard on the heels of the Waratahs’ home loss to the Blues, those defensive questions also apply to more widely to Australian rugby as a whole.

The Force wear blue shirts and they play blue-collar football. In American football, they would be called a basic ‘hustle’ team – and in the United States that is a big compliment. They don’t do anything fancy, but they attend to the basics of the game with accuracy and determination.

Their set-pieces are solid and they did not lose one ball from either scrum or lineout against the Reds. In Tatafu Polota-Nau they possess the best scrummaging hooker in the country, and they have surrounded him with a competent supporting cast of props.

They have Adam Coleman back to lead a lineout which typically features four genuine receivers, and (on occasion) Rory’s Arnold ‘twin tower’ brother Richie in the second row. Even without Arnold in the starting line-up, Coleman felt comfortable enough to call only one lineout of 11 to himself in the course of the game against the Reds.

Add in an aggressive defensive pattern and two genuine ‘dogs’ over the tackle ball in the shape of Matt Hodgson and Richard Hardwick, and you have a recipe for success based on hustle and grit. Although you won’t beat teams who can match your effort and supplement it with a higher overall skills package, you will beat those who cannot match your intensity and organisation on the day.

Force head coach Dave Wessels is key to the development of the team’s character. Wessels was defensive coach at Jake White’s Brumbies back in 2012, a side which ranked second in the competition in terms of points conceded. When Wessels left for Perth, Ben Mowen (then captain of the Brumbies) joked that he saw White’s playbook disappearing into his luggage.

Wessels has brought with him a hard-nosed South African attitude based on confrontation and winning the personal collisions – as much between personalities as between physiques and skills. If the majority of your players can beat his opposite number, for the majority of the time you will win the game.

Why was this too much for the Reds on Friday evening, given their 9-2 advantage in international player pedigree from the starting line-ups?

The South African attitude on attack is a straightforward one. It is based on wrapping forwards around the corner of each successive breakdown and building momentum with a succession of pounding physical runs off first receiver.

Attacking movement tends to go ‘same-way’ in order to achieve that impetus, and it carries on until the defence is no longer able to cope with your work-rate and physicality.

The Reds’ response to what they must have known would be coming their way was disappointing, even in the early stages from set-pieces: 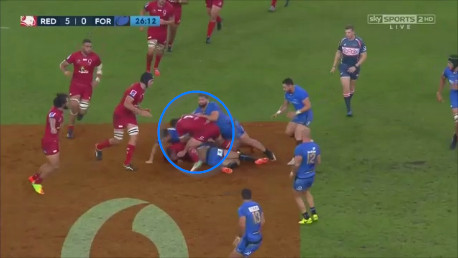 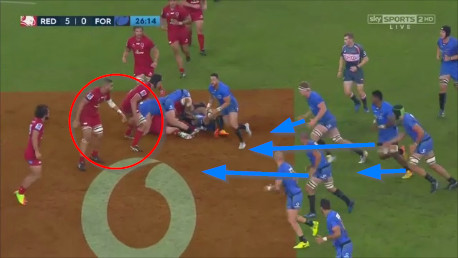 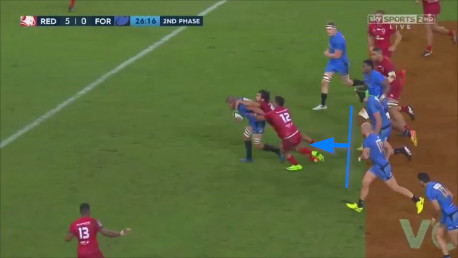 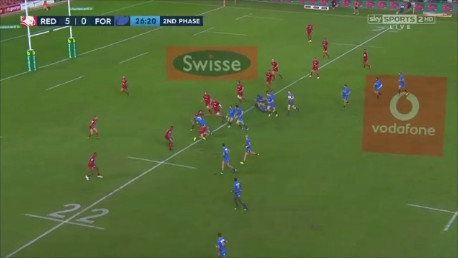 From first phase lineout the Force concentrated on absorbing the Reds’ best defender, No.7 George Smith, by setting up a ruck in midfield. In the first frame, it is Francois van Wyk who wipes Smith out and ensures he won’t be playing a meaningful part in the remainder of the sequence.

Two seconds later and the impact of the Force’s work-rate around the corner of the ruck becomes clearly visible. Four forwards – from inside to out Matt Phillip, Isa Naisarani, Adam Coleman and Matt Hodgson – have wrapped around the breakdown and are ready to receive the ball from half-back Michael Ruru.

In contrast, only two Queensland forwards (Rob Simmons in the black hat and his locking partner Lukhan Tui) have shifted across to mark them, and Simmons has already ben engaged by Ruru at the side of the ruck. In these situations, a three-forward defensive wrap is an absolute minimum requirement.

With Simmons and Tui overloaded, Ruru is able to put Hodgson into a gap between the first two Reds’ backs, Karmichael Hunt and Duncan Paia’aua, and get blanket support in behind him. Not only is this a mismatch in power, it guarantees mismatches will occur further down the sequence. At 26:20, on second phase it is No.2 Heath Tessmann and No.6 Ross Haylett-Petty engaging Hunt and Paia’aua.

If the pattern continues, by the time play reaches the far side-line the Reds’ backs will all be engaged and their Force counterparts will have a free run in reverse field against Reds’ forwards.

The pay-off occurred at a Force attacking lineout in the 37th minute. Here they have created an even better situation than in the earlier example.

Both Smith and Hunt have been absorbed in the first ruck, Ruru has drawn the guard (Sam Talakai) and Simmons is faced by three Force forwards bearing down on him at second phase – Coleman, Phillip and Naisarani. 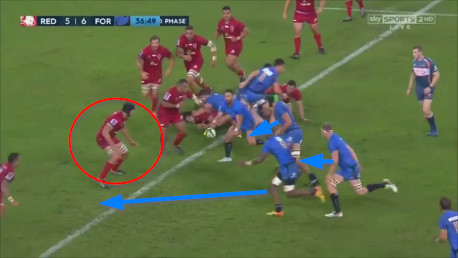 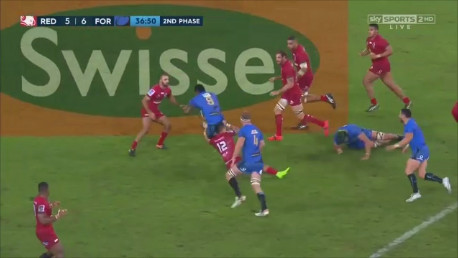 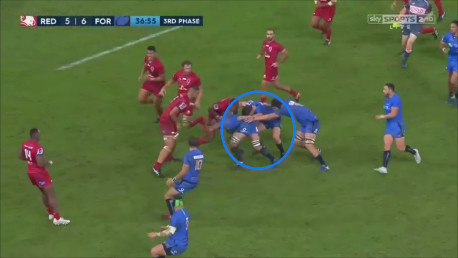 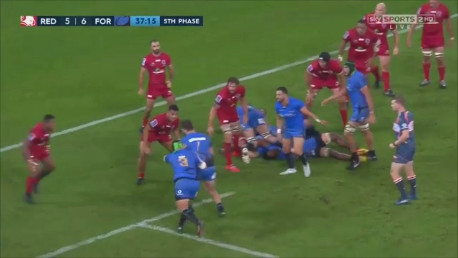 In the second frame, Naisarani is already through Paia’aua and into the Reds’ backfield. Another wave of Force forwards (Hodgson, Tessmann and Haylett-Petty) are already digging into the Queensland outside centre Samu Kerevi on the next carry.

The Reds continued to neglect their same-way side defence all the way back to the goal-line (37:15 with the Force props running at the gap inside Kerevi again) until the Force scored, inevitably, through Ross Haylett-Petty on the eighth phase.

The final stages of the score can by watched ‘live’ on the highlight reel from the game:

Hard as the Force work for it, this is a very soft try to give up at this level of rugby union.

It comes from a lack of planning and defensive organisation so fundamental that it is very hard to agree with Queensland head coach Nick Stiles’ condemnation of the players, without reference to the coaching.

“I gave [the players] a massive spray because I was livid with that first half performance after scoring the first try,” he said.

The Reds’ defence from scrums was also poorly-conceived, and the Force took full advantage. Here are two examples from Force attacking scrums on (their) left side of the field: 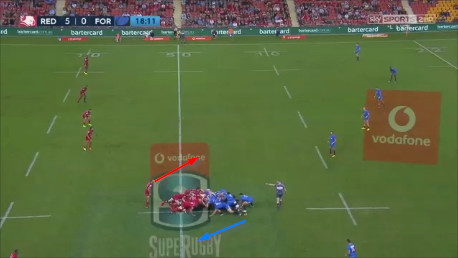 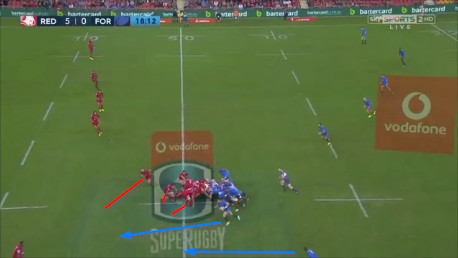 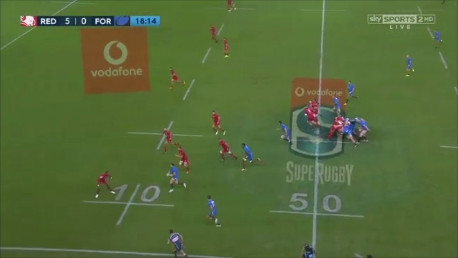 At scrums in this position on the field the defensive half-back has an important decision to make. Does he stay on the short-side (the side of the feed), or does he shift around the back of the set-piece to help out with the defence on the open-side?

In this instance, Nick Frisby opts to shift open-side, even though the Reds already have good cover on that side of the field (four defenders, plus the full-back out of shot).

No problem, so long as either the Reds’ No.6 or 8 are able to cover the attacking No.9 breaking blind. But there is no evidence that the Reds have sorted out their organisation in this area. Ruru is able to scoot short-side unmolested and set up a simple two-on-one with wing James Verity-Amm as a result. 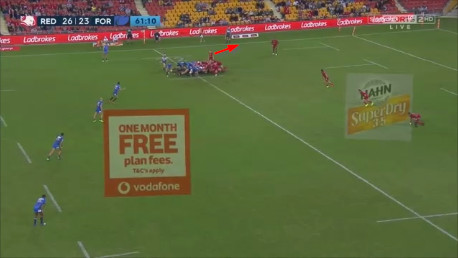 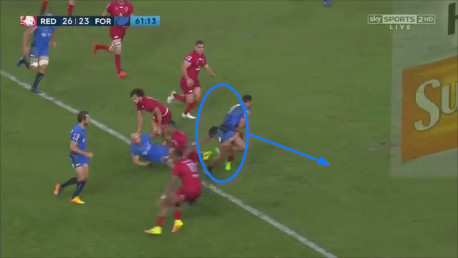 This time Frisby retreats to the short-side having been burned by Ruru’s first-half break, and the Force choose instead to set up a simple open-side backs move with the defensive No.9 away from the ball. The Reds have it marked up in the second frame, with Hunt on Billy Meakes, Paia’aua opposite Curtis Rona and Kerevi taking care of Peter Grant.

Nonetheless, the Force get the match-up they want, with their biggest midfielder (1.94-metre, 102-kilogram Rona) confronting the Reds’ smallest inside back (Paia’aua at 1.80 metres and 91 kilograms). Rona is able to win his personal physical contest, drill through Paia’aua and deliver the offload to Marcel Brache for the go-ahead score.

Summary
It is all very well for Stiles to get irate with his players after the loss to the Force, but the platform for the loss was also set by some obvious coaching mistakes on defence. Coaching is where the ultimate responsibility for the Reds’ underachieving 2017 lies.

The contrast in coaching accuracy with the Force staff was stark. Wessels’ side were clearly well-prepared to take advantage of the weaknesses they expected to find in the Reds’ defence.

The Force’s gameplan is not complicated but it is effective. They aim to give themselves confrontations and physical micro-battles that are winnable. They defend well, keep the scoreboard close and give themselves a chance. If the game dissolves and becomes a scrap, they know it will be a contest they are well-equipped to win.

The lack of coaching consistency below international level is a concern for the ARU, and particularly so on the defensive side of the ball.

The fact that a large portion of that consistency is being provided by a South African, coaching at a franchise which is allegedly top of the culling list, is an issue of even greater urgency. Whither now for the ARU and SANZAAR?