It has been an amazing three weeks watching the Giro d’Italia. The organisers could not have scripted a better outcome for its 100th anniversary if they had tried.

It had it all – crashes due to badly parked police motorbikes that could have changed the whole outcome of the race, poor sportsmanship, swapping of the maglia rosa on the last few stages and the eventual winner coming from behind to win on the last stage.

The first grand tour of the year has certainly set a very high bar for the two remaining grand tours, but here are my five takeaways from this year’s giro are:

1. Without Jungels, Mollema and Adam Yates, Tom Dumoulin would not have won the Giro

The 2017 Giro suited Tom Dumoulin with its two individual time trials. The biggest risk was whether Team Sunweb could send a strong enough team to support Dumoulin once the Giro reached the high mountains.

Dumoulin did not disappoint his supporters as by the end of the first individual time trial he had taken the maglia rosa (pink jersey). The problem now was keeping it.

Unfortunately for Team Sunweb and Dumoulin his key lieutenant Wilco Kelderman collided with the police motorbike that was parked at the side of the road during stage nine. The injuries he sustained forced his withdrawal – it effectively left only Laurens ten Dam as his main domestique for the high mountains.

True to form, Dumoulin was left isolated after the first or penultimate mountain passes on every stage of the final week as his teammates were unable to control the race or dropped off as they could not sustain the fast pace. Fortunately for Dumoulin he was able to form alliances with other teams. This was most evident during stages 19 and 20.

On stage 19 Team Sky, Orica Scott, Quickstep-Floor, Trek-SegaFredo and Team Sunweb riders spent a lot of time on the front of their pulling Dumoulin along after a rookie mistake on a downhill section resulted in Bahrain and Movistar splitting the bunch. A drag race between the two groups occurred and they reformed only prior to the Piancavallo climb.

Dumoulin expended a lot of energy before the final climb and lost ground on his key protagonists and eventually lost the maglia rosa to Quintana.

On the penultimate stage Dumoulin has also found himself distanced by Quintana, Nibali and Pinot on the last climb and with it the Giro slipping away from him. Friendships and alliances saw Bob Jungels, Adam Yates and Bauke Mollema pull turns on the front to get Dumoulin to the top of the Fonza summit and then further turns along the final 12-kilometre stretch to limit the damage. Without their assistance, Dumoulin’s Giro would have been over there and then.

Dumoulin later told waiting journalists that, “I’m forever thankful and grateful for the work that Bauke Mollema, Bob Jungels and Adam Yates did for me”. 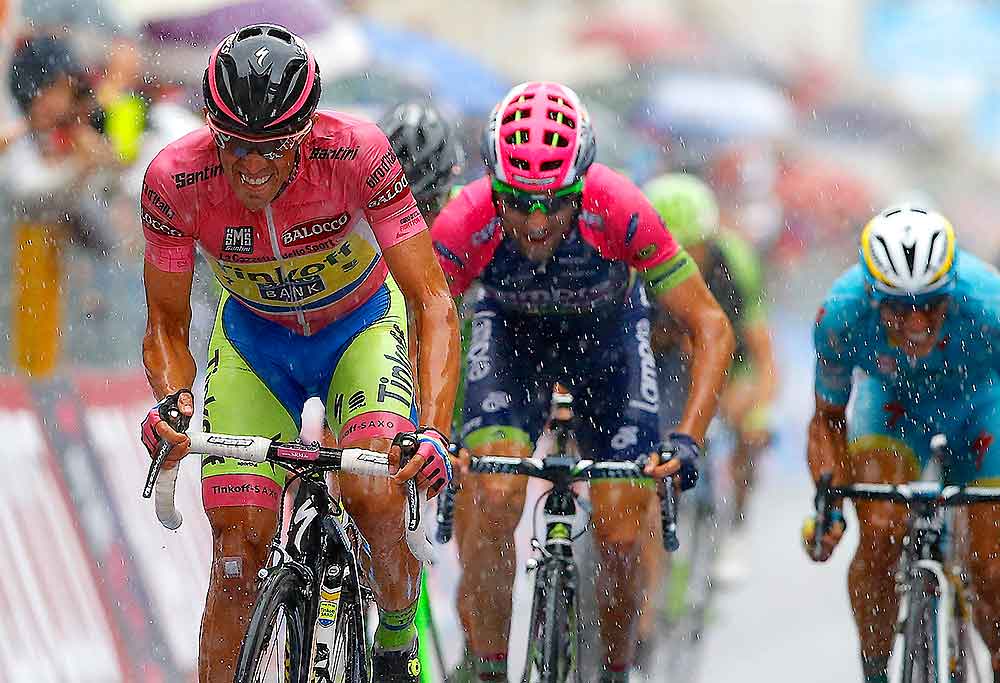 It was a huge Giro for Dutch riders, and I am sure Holland would have been celebrating long into the night on Sunday after Tom Dumoulin became the first Dutch cyclist to win the Giro after 100 editions and 37 years since their last grand tour success.

The Dutch celebrations were not limited to Dumoulin as Bob Jungels’ put in a superb time trial effort to overtake Adam Yates to win the young riders jersey.

Dumoulin and Jungels are both young in cycling terms. They are both time-trial specialists that can also climb over some of the biggest and most iconic mountains in Europe. They also showed that they step up to the next level and mix it the with more specialised climbers like Quintana, Pinot and Nibali. Providing that there is sufficient team support, both these riders are certainly capable of winning more grand tours in the future.

There is also Steven Kruijswijk who led the 2016 Giro until his spectacular crash into a snowbank on stage 19. While we will never know if he would have won the Giro in the end, it suggests that he has the pedigree to potential win a grand tour if the right opportunities arise again.

And if that was not enough, to round out the Giro Jos van Emden from LottoNL-Jumbo took out the last stage and claimed his maiden grand tour stage win, rounding out a highly successful Giro for Dutch cyclists.

3. Gaviria shows he is also a world-class sprinter on the road

Fernando Gaviria, the young Colombian sprinter from Quickstep Floors, was participating in his first grand tour. While a world champion on the track, his palmarès on the road was looking a little depleted.

Gaviria did not muck around and hit his straps from the start at the Giro. He won a couple stages in the first week and was in the maglia rosa after stage three. It did not end there as he picked up a couple more stage wins in the second week, including showing fantastic bike handling skills in the final sprint.

As the Alps were appearing on the horizon, most sprinters were leaving the race. No one expected a young sprinter such as Gaviria to remain for the third arduous week.

But Gaviria was not finished. He was taking his points jersey over the Alps and the Dolomites all the way to Milan, and in doing so he would help Bob Jungels in his bid for the young riders jersey.

At 22, his first grand tour, he came away with four stage wins, points jersey and wore the maglia rosa. Suddenly his palmarès on the road was looking every bit as good as his track success.

Come the end of the Giro it was clear that the young track world champion was also the best sprinter in the world on the road as well. 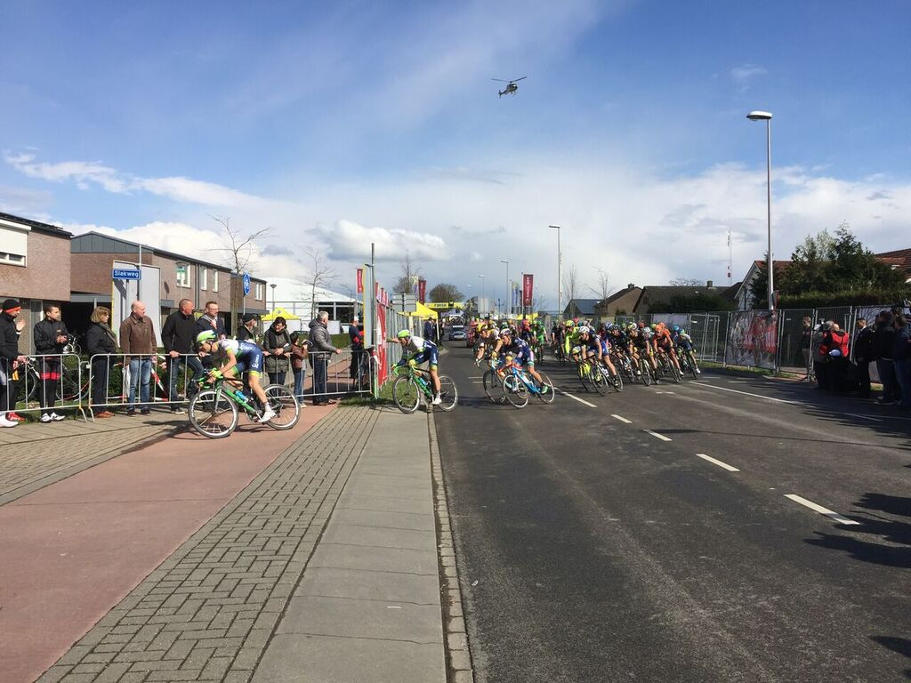 Surely stage 17 will go down as one of the most bizarre in modern day Giro history. Out of the blue Dumoulin pulls to the side of the road, gets off his bike and rips the bibs down. An upset stomach forced an emergency nature break.

Rather than the remaining peloton slowing down for him to catch up, Zakarin, Quintana and Nibali attacked. Dumoulin was left stranded and had to fight up the Umbrail Pass by himself. He lost valuable time on his chief rivals but still managed to keep the maglia rosa.

It left fans and Eurosport commentators questioning whether Zakarin, Quintana and Nibali broke one of cycling’s oldest ‘unwritten rules’ of slowing down if the race leader experiences misfortune or whether professionalism had won out on the day. Clearly when a race is on, it is difficult to slow down for anyone, let alone the leader, and watch other riders disappear into the horizon.

A word of words in the media broke out between Dumoulin and Nibali/Quintana after the episode. In any other sport the three of them may have been hauled over the coals by the organisers or the UCI for bringing the sport into disrepute. Thankfully they made up a couple of days later.

5. The Giro really is the best grand tour on the cycling calendar

The Giro has everything ranging from the sensational scenery of the Italian Alps and the Dolomites through to the tranquil and calm sea views along the coastline. The tifosi (fans) are passionate about their cycling, which sees them camped out by the side of snowbanks on the toughest mountain passes, like the Stelvio.

The parcours always include the most challenging and iconic climbs to test the climbing abilities of very best riders every year. As we have heard on many occasions, it is the toughest race in the world’s most beautiful place.

No-one team dominates or controls the peloton like the ‘Team Sky bots’ that cover every attack and pulls back every dangerous breakaway at the Tour de France for Chris Froome and before him Bradley Wiggins. It makes for more interesting and unpredicting racing over 21 stages.

And this year, like last year, the Giro did not disappoint. The maglia rosa changed hands three stages from the end. Coming into the last stage, an individual time trial, there were six riders within 1 minute and 30 seconds of each other. In the end the rider coming fourth won the Giro by 31 seconds, and that rider was Dumoulin.

Does racing get any more exciting than that?

These were my key takeaways from the last 21 days of racing at the Giro. There were other highlights, like Caleb Ewan winning his first grand tour stage, Omar Fraile’s win on stage 11 on what was one of the most exciting stages of the Giro. His determination to bridge the gap to catch Rolland after being a breakaway for most of the stage and sealed the win in a four up sprint. How he summons enough energy to sprint for an impressive victory is anyone’s guess.

And how could you forget Tejay van Garderen winning his first grand tour stage only days after questioning his abilities to perform as a general classification rider.