The ten best Round 11 games from the past ten years

Welcome to another edition of my weekly column with which we take trip down memory lane and revisit some of the classic AFL matches that correspond with the upcoming round.

Let’s take a look at the ten best games from Round 11 in the past ten years.

In a very tight game, the Giants took it up to the Hawks, leading by as much as 11 points late in the third quarter. However, Hawthorn steadied, kicking five of the final seven goals of the match to claim a seven point win.

9. Western Bulldogs 12.11.83 v West Coast 11.9.75 (2016)
With both sides boasting a 7-3 record and just 3.3 per cent separating the teams on the ladder, the Bulldogs and Eagles went head-to-head in a hard-to-tip clash at Etihad Stadium on a Sunday afternoon under the roof.

After a strong opening term, the Eagles lost the ascendancy on the contest, with the Dogs maintaining the lead for most of the remainder of the day. Trailing by 21 points more than halfway through the last quarter, West Coast suddenly awoke, slamming on three consecutive goals to get within a few points.

In a tense final five minutes, the Western Bulldogs managed to claim a goal through Tom Liberatore, allowing them to win by eight points. These teams would later meet in an Elimination Final in Perth, with the Dogs recording a huge upset win on their way to a record-breaking premiership.

8. St Kilda 12.13.85 v Melbourne 12.11.83 (2015)
Languishing in the bottom half of the ladder, both St Kilda and Melbourne were desperate for victory heading into their Sunday twilight clash at Etihad Stadium.

Facing a troubling record against both St Kilda and while playing under the roof, the Demons performed well, keeping up with the Saints for the whole match, and when the three quarter time siren sounded, the scores were tied.

In an incredibly tense final term, it took until the final minute of the match for Jeremy Howe to kick the first goal, allowing the Demons to edge their way in front. From the resulting centre bounce, the Saints surged forward through Jack Steven, and a long ball to the goalsquare saw Leigh Montagna pounce and kick the winning score with 20 seconds left on the clock, consigning the Demons to more misery.

Conceding seven goals in the opening quarter, things didn’t get off to a great start for North Melbourne. However, in a surprise to most viewers, the Roos slammed on seven goals of their own in the second term, cutting a hefty deficit to just eight points. The Roos and Cats went blows for blows in the third quarter, Geelong kicking 6.1 to North’s 5.3.

In a tense final term, the scoring dried up considerably, with the Cats holding off the plucky Roos to score a 13 point victory. Gary Ablett was simply magnificent for the winning side, amassing 39 possessions and kicking two goals.

6. Essendon 18.6.114 v Adelaide 21.4.130 (2009)
Another match featuring two sides who were locked on the same amount of wins, the Bombers and Crows clashed at Etihad Stadium on a Sunday afternoon. In a high-scoring contest, the Bombers took a ten point lead into half time over the very accurate Crows, who didn’t kick a behind in the first half.

The third quarter produced some of the best football played between two teams for the season, with Essendon kicking 6.0 to Adelaide’s 6.2, cutting the deficit to eight points at the last break. It was the final quarter in which the Crows took the ascendancy, slamming on another six goals to win by 16 points.

Kurt Tippett starred for Adelaide in just his 30th game, booting seven goals, while Scott Lucas slotted four for the Bombers. A quirky stat about this game? The first half was played with the roof open, with both sides playing under the lid in the second half due to imminent rain.

5. St Kilda 11.14.80 v West Coast 12.12.84 (2013)
With only two wins from their opening ten games, St Kilda faced a tough challenge against the West Coast Eagles at Etihad Stadium, who were challenging for their third consecutive finals appearance. Across the opening three terms, the Saints held the ascendancy, leading by 13 points at the final break.

In a frenetic final term, West Coast kicked four of the first six goals to level up the scores. With a string of behinds, the Saints regained the lead but only just. With just a couple of minutes on the clock, the Eagles went coast-to-coast, with Matt Rosa sending a long bomb into a vacant forward line.

Chasing it down was defender Eric Mackenzie, with former Eagle Beau Maister hot on his tail. However, fortunately for West Coast fans, Maister suffered a hamstring injury during the chase, allowing Mackenzie to run into an easy open goal. The Eagles managed to hold onto their lead as the clock ticked down.

4. Geelong 14.14.98 v Greater Western Sydney 14.4.88 (2016)
Occupying two spots in the top four with a 7-3 record each, the Giants faced the ultimate litmus test when they travelled down the highway to take on Geelong at Simonds Stadium.

In a wonderful hard contest, the Giants and Cats traded blows for much of the evening, with the home side leading by only two points at the last break. Thanks to the forward brilliance of Tom Hawkins and Daniel Menzel, Geelong managed to skip clear by 16 points, eventually claiming a mighty win.

3. Sydney 12.17.89 v Essendon 12.8.80 (2010)
Sitting just inside the top eight, Sydney went into their clash with Essendon at the SCG looking to snap a four game losing streak. Under blue skies, the Swans and Bombers couldn’t be separated in the first half, with scores level as they retreated back into the rooms.

With the rain starting to tumble in the second half, skills went out the window but the fierce contest remained. Scores were still tied at three quarter time, setting up a blockbuster final term. Sydney broke out to a seven point lead in a fierce stalemate, but a late goal to Leroy Jetta cut the deficit to a single point.

Looking for the knockout blow, the Swans found it through champion Adam Goodes, who kicked the last goal of the game to send delirium into the SCG stands.

2. Essendon 11.11.77 v Carlton 10.12.72 (2013)
Well-entrenched in the top eight, both the Bombers and Blues went head-to-head under the Friday night lights of the MCG, with 82,639 flocking to watch two likely finalists play. In a low-scoring, high-pressure contest, the Blues held the advantage over the Dons in the first half, with Jarrad Waite starring up forward, kicking Carlton’s first five goals of the game.

Halfway through the third term, the Blues held a 31 point lead and looked set to run away with a convincing victory. However, as Essendon made their trademark in the 2013 season, they fought back admirably, getting the deficit back to 14 points at the final break. 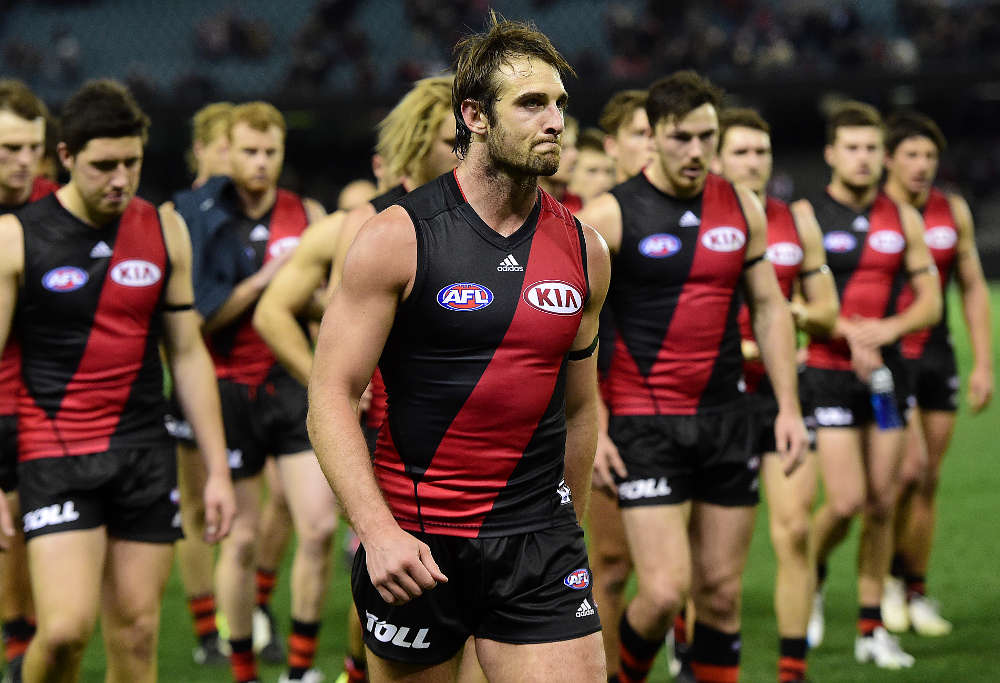 With a run of four consecutive goals, the Bombers snatched the lead through Jake Melksham, but it was Waite with his seventh who looked set to be the hero. Enter Melksham, again. The feisty Don kicked his second to put Essendon up by five points with just a couple of minutes left on the clock.

As Carlton made one last attempt forward in the dying seconds, Jake Carlisle took a huge contested grab to seal the win for the Bombers. Interestingly, these two sides would meet later in the year, with Essendon once again stealing a win in the final seconds, but it would be the Blues who would replace the Bombers in the top eight after they were penalised for the doping scandal that rocked the 2013 season.

1. Essendon 15.5.95 v West Coast 14.10.94 (2007)
Taking on the ladder-leading reigning premiers on a Friday night blockbuster at Etihad Stadium, this Essendon and West Coast clash attracted an incredible crowd of 48,913.

Most of them were silenced, however, when John Worsfold’s charges made an excellent start, leading by as much as six goals in the second quarter. However, it was reduced to just 11 points at the final change.

With the Bombers fighting incredibly hard, they grabbed the lead for the first time with a monster goal from Scott Lucas outside the 50 metre arc, with Dennis Cometti appropriately calling that “the roof is on, but it’s about to be blown off!”

In a tense and low-scoring final term, Lucas added another goal, but the Eagles came back to trail by just a point. With seconds left on the clock, a long ball to the top of their goalsquare saw Dustin Fletcher rise over the pack and fist the ball over the boundary line, just centimetres from the opposition goals. The siren sounded from the resulting throw-in, handing Essendon one of their most famous victories.

Thanks again for reading, and make sure to check back in at the conclusion of this weekend’s games for the Round 11 Team of the Week!

Essendon concedes Daniher may miss first half of season

After his failed trade request to Sydney last October, key Essendon forward Joe Daniher could miss the first half of the AFL season with injury.

Essendon concedes Daniher may miss first half of season

Despite being vice-captain for the past three seasons, dual best-and-fairest winner Zach Merrett has been axed from Essendon’s AFL leadership group.

Following on from an embarrassing 16-goal exit from the 2009 finals series at the hands of the Adelaide Crows, Essendon entered the new decade in semi-promising fashion, winning five of their opening ten matches in 2010. 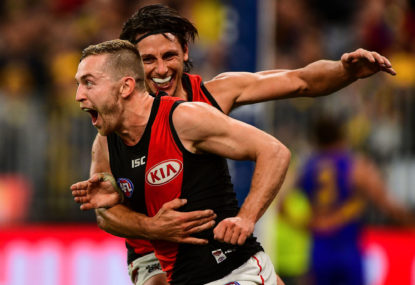