They say that in order to win a grand final you have to lose one first – but try telling that to these clubs that got that job done on their first go.

With records being set and held for decades and at times setting up a period of domination for these respective glubs, these grand final fins changed not just the clubs but the competition itself.

With that in mind, here’s what I think are the eight best maiden premiership wins in the NSWRL, ARL and NRL.

8. Newtown Jets, 1910
In only the third season of the then NSWRFL Newtown made themselves premiers. They went through the season winning 11 times, losing twice and drawing once in 14 matches, placing them one point clear of the two-time premiers South Sydney Rabbitohs.

The grand final would end in a four-all draw, but as the Jets were the minor premiers they were declared the premiership winners. Over the next 70 years they would win two more premierships before departing from the competition in 1983.

7. North Sydney Bears, 1921
In 1921 the Bears became only the second team to go through a season undefeated, winning all eight games and drawing with the Roosters eight-all in the fifth round. The Bears were declared premiers as they finished the season on top of the table. This would start a back-to-back title reign for the Bears, winning the following year.

Unfortunately that would be the end of the glory for the club. Over the next 70 years the club would never again win a premiership, and the 1999 season was the club’s last.

6. Wests Tigers, 2005
The Balmain Tigers merged with the Western Suburbs Magpies in 2000 just to survive, forming the Wests Tigers in the process. The venture proved fruitful as it would just five years later the new club achieved premiership glory.

In one of the most entertaining grand finals of the decade the careers of Benji Marshall, Scott Prince and Johnathan Thurston were made. It was a grand final of young guns and remains a fond memory, the Tigers defeating the Cowboys 30-16.

5. Newcastle Knights, 1997
In their tenth year in the competition the Knights would put on one of the best grand final wins in history. Stealing the game from the Manly Sea Eagles in the last seven seconds with one of the best-ever tries ever, this history-making madien premiership was pure awesome.

The victory would also kick off the career of future immortal Andrew Johns and give the club back its glory days. The Knights would win again in 2001, and they still have a 100 per cent grand final success rate. 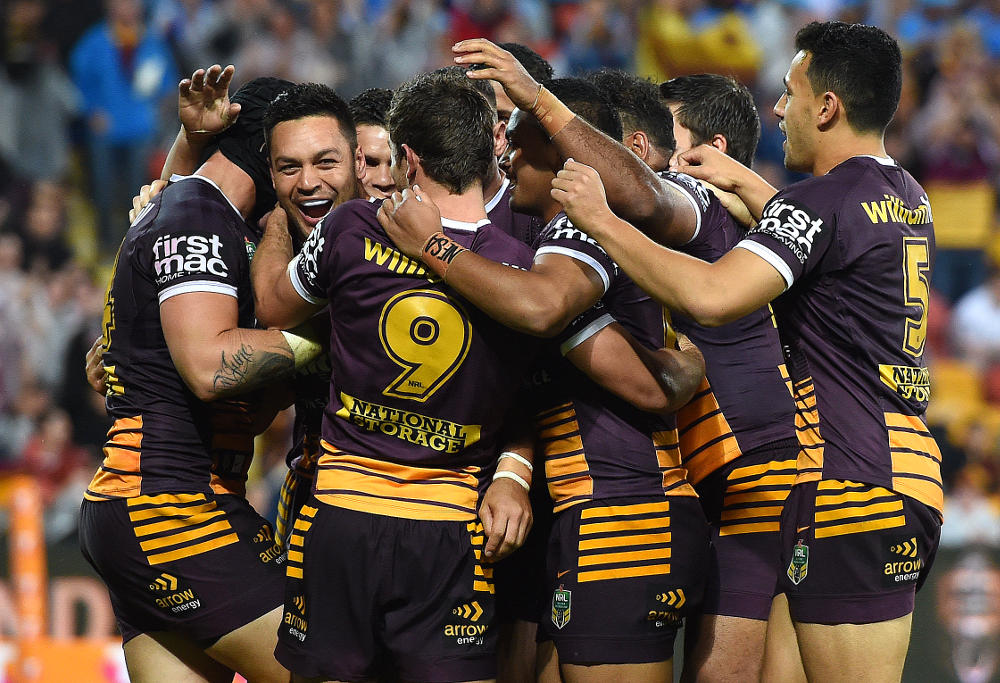 4. Brisbane Broncos, 1992
In only their fifth season in the competition the Brisbane Broncos would make history by becoming the first Queensland team to win the NSWRL premiership. This would start a decade of dominance for the club – they won the premiership the next season, too, which makes them the last team to win back-to-back premierships. They would win the Super League competition in 1997 and the newly formed NRL in 1998, making it four titles in six years.

3. South Sydney Rabbitohs, 1908
South Sydney were the very first premiers of the now NRL in one of the most important moments in the league’s history – this really started it all for the club and competition. With this first historic win the club would go on to claim 19 more titles over the next six decades and become the most dominant force in the competition, producing some of the competition’s best players. Without this first title the club may have never become the force they did. In total the Rabbitohs have 21 titles, thier most recent in 2014.

2. Canterbury Bulldogs, 1938
In 1935 the Bulldogs enterted the competition and took only four years to win thier first title, easily defeating the Roosters 19-6. This was the quickest any expansion club won a title, a record that stood for over 60 years – until our number-one maiden title winner…

1. Melbourne Storm, 1999
The 1990s saw four teams win in thier maiden grand final appearances: Penirth, Brisbane, Newcastle and of the course Melbourne, the best of all.

What more could you want from a grand final? Two young teams surprised the entire competition just by making it to the final. Nathan Blacklock’s 60-metre try, the 14-0 second-half comeback and the Storm smashing the quickest title record for an expansion team in half and becoming the first Melbourne team to win, finally making Glenn Lazarus a five-time premiership winner with three clubs. What’s not to like?

Then of course there was the penalty try finish to allow the Storm to steal the game from St George-Illawarra. Without doubt it was the best maiden victory of all time.

What do you think, Roarers? Which one of these is your favourite?