The simple joy of having a second team

Sporting fandom is a realm of unbridled passion. In loving a team, our rationality and perspective tend to be the first casualties. Each week we show up dutifully, but do we enjoy it? Of course not. We care too much.

After 80 minutes our knuckles are white, our stomachs ache with anxiety and we grumble out of the stadium, leaving a trail of creative obscenities in our wake.

It must have started out fun, but so often our love for a club warps into a near inability to enjoy sport for what it is. Whole seasons go by and some of us barely register any sensation beyond sustained anguish.

My family doesn’t have many traditions, however there is one time-honoured practice: when proximity permits, we get together to watch Waratahs and Wallabies games. The prevailing emotions are rarely positive. We abuse referees, who show no indication of being able to hear us through the TV. Everyone’s tense throughout. We even let our frustrations from the game bleed over into real-life arguments.

What should be a wholesome family activity is approached with an overwhelming sense of ‘getting it over and done with’. We actually record the games as we’re watching them so that, if we win, we can watch them again in full without the stress.

Despite my blinkered allegiance to these rugby teams, I watch plenty of other games as a neutral – other sports too. I stay up late for European football featuring players so obscure even Lucy Zelic would have a hard time reciting the team sheets.

I may be less emotionally invested, but it’s through such fixtures that I’ve found myself falling in love with sport again. Away from the expectation of success, the nail biting and remote-control throwing driven by team loyalty, sport can be an incredibly joyous thing.

I’ve always had a second tier of teams, outside my favourites, whom I prefer over others. It doesn’t ruin my day if they lose. Likewise, I don’t arbitrarily demonise their opponents and their fans. But I can savour their successes like a light aperitif. I’m more patient with them and appreciate their development, however gradual.

Second teams strip back our gnarled parochialism and allow us to enjoy sport while remaining recognisable to our friends and partners during game time.

A good second team should have contrasting qualities or objectives to your main squeeze. European football leagues are great for this because you can pick a title contender, a Champions League smokey, and a battler looking to avoid relegation. The plucky underdog is always a popular choice as second favourite.

Sometimes we’re so busy being fans of one team that we forget we used to be fans of the sport as a whole. For those too busy shielding their eyes from the farce that is the Australian Super Rugby conference, most of the rugby played by Kiwi teams this season has been exquisite. The likes of Damian McKenzie, James Lowe, Malakai Fekitoa, Ben Smith, Rieko Ioane and Beauden Barrett could join forces in a Harlem Globetrotters-style franchise if they wanted to.

Fanatics might label the stockpiling of second teams as antithetical to proper fandom. Also, best to avoid belatedly hopping on any bandwagon that might see you labelled ‘plastic’. All in all, I find second teams an integral part of my sporting enjoyment. The only hard and fast rule is to never cheer on your second team in a direct contest with your main team. That’s a surefire way to lose all credibility.

So Roarers, who are your second teams and why? 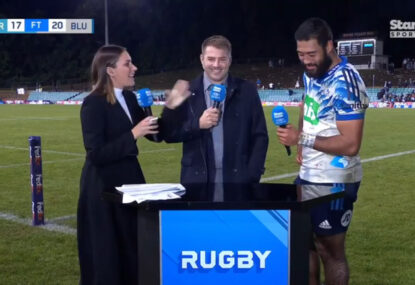 Deja blue: Sullivan steals victory after the hooter with yet another clutch Blues drop goal

They did it last week against the Brumbies, and now they've stolen victory at the death from the Tahs with a drop goal. In… 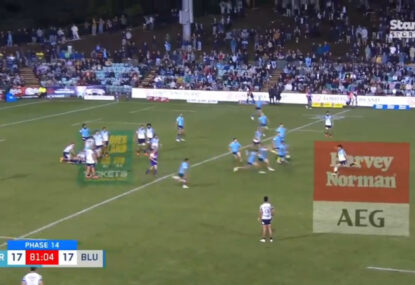 Deja blue: Sullivan steals victory after the hooter with yet another clutch Blues drop goal

REACTION: 'The boys don't give up' - Blues ice another drop goal after the siren to sink Tahs 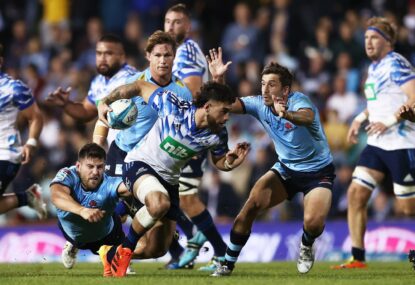 REACTION: 'The boys don't give up' - Blues ice another drop goal after the siren to sink Tahs

'You don't see that often': Hooper gets crunched... for the second time in 20 minutes

Sean Maloney with a rather short memory in this case... The Tah got crunched by two Blues up the other end and then got… 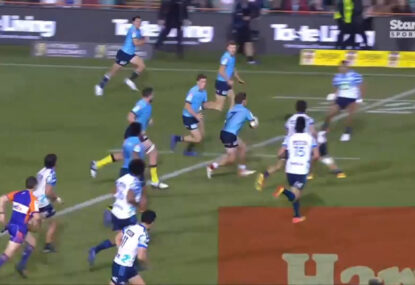 'You don't see that often': Hooper gets crunched... for the second time in 20 minutes

The Blues led 3-0 at halftime despite playing 10 minutes with two players off the field. Their stout defence kept the Leichhardt Oval crowd… 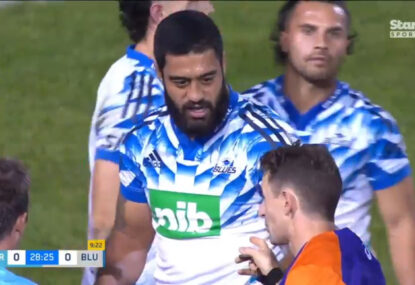 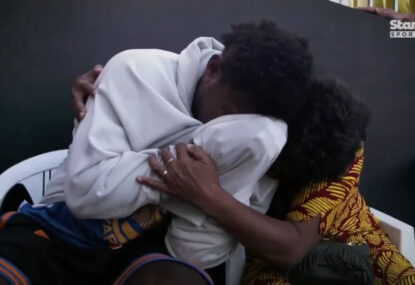