'Sonny Boo' and the Blues give fans a night to savour

There were ominous signs. It was steadily raining and we were trudging to the Lions versus Blues match at Eden Park, a stadium often referred to as a concrete jungle.

The Lions should relish this.

My nephew bounced along beside me, full of excited chatter. He had questions, so many questions and I had so few answers.

So I asked a question of my own: ‘Who is your favourite Super Rugby team?’

His response: ‘The Crusaders, then the Chiefs, Highlanders and (my beloved) Hurricanes.’

Every New Zealand franchise, except the one we were about to watch.

He politely declined my offer of a rubbish bag to keep him dry (it looked scruffy), and a pack of Doritos, patiently explaining to me they were cooked in palm oil.

I guiltily returned them to the shelf, quietly contemplating I had just been chastised by a 9-year-old, and that he was doing nothing for Auckland stereotypes.

It appeared we might both learn a lot on this showery night.

The lights of Eden Park pierced the drizzle, creating a watery halo. Fans poured around and into the stadium.

My nephew, apparently dissatisfied with the lack of my insight into the Lions roster, was carefully considering the Blues’ line-up.

He said he was really looking forward to seeing Sonny Boo play.

He immediately corrected himself, but it was too late. It was out and I was still stinging from my Doritos debacle. Sonny Boo stuck.

We didn’t know it, but we would be yelling ‘Sonny Boo’ loud and often during the course of the evening.

We were seated, the skies cleared and the atmosphere was thick with anticipation. The 40,000-strong crowd stood in silence to acknowledge those affected by the tragic events in Great Britain.

The Blues performed a haka, in remembrance of former Blues players Jonah Lomu and Kurtis Haiu.

Kiwis can be sensitive about the haka and expect it to be afforded respect. Fair enough too, it is a part of our cultural fabric.

When the Blues players huddled, some with their backs turned to the Lions while the moment of silence was observed, it felt like a lost opportunity to reciprocate that respect.

Hindsight is easy, and I’m not criticising the Blues players or management. But as a fan of the game I would have loved the Blues to have stood alongside the Lions, a reminder of what these tours are about – unity. A rugby community coming together to compete, engage and celebrate the game.

It feels like this can sometimes be lost among the media chest beating and points scoring.

But back to the match and Sonny Boo.

The difference in approach was immediately illustrated by the manner in which each team scored their first try.

The Blues swept up field for Reiko Ioane to score, his first of four, and the only one that wasn’t subsequently disallowed by the TMO.

The Lions held possession for long periods before CJ Stander barged over from a rolling maul, much to the delight of Lions fans and bemusement from locals. 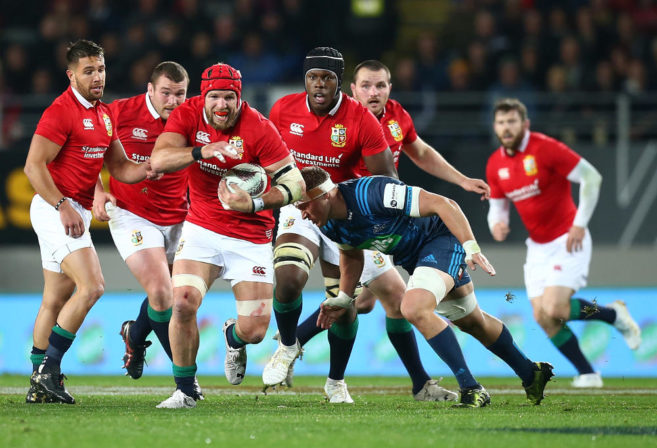 The teams crashed around the field, but I couldn’t take my eyes off giant tighthead prop Dan Cole. He was huge. I was halfway up the east stand and could still see the thick rolls in his neck and head.

Surely the term ‘rolling maul’ was coined with him in mind. Google reliably informs me he weighs a modest 123 kilograms, but I suspect he was dieting that day. Not surprisingly, the Lions scrum dominated.

As the game progressed the Lions players increasingly crowded the referee. There was much finger pointing and gesticulating whenever he blew his whistle. It was like watching a team of solicitors pleading their case.

And then there was Sonny Boo. Sonny Boo! SONNY BOO!

He ran hard, tackled hard and attacked the ball. His trademark off-load was prominent and he hustled to score from a deflection off the post with time up in the first half.

It was impressive stuff, particularly considering his time out of the game with injury.

Sonny Boo has always had detractors, but he can do things on a rugby field that others can’t, and for me rugby is better with him playing.

My nephew was engrossed and even destroyed a pot of chips without querying the origin of the cooking oil.

The second half continued much like the first; sprinkles of rain, disallowed tries and a Lions team struggling to find attacking cohesion.

The Lions targeted winger Matt Duffie with repeated bombs. They obviously didn’t know he has played in the NRL, where the bomb is an often utilised attacking weapon.

And like a choral conductor in front of the sopranos, Duffie is excellent with the high balls.

He’s also tough. He managed to get back up after being hit in the air not once, but twice by Liam Williams. The second of which resulted in a yellow card.

Despite the Lions failing to create much offensively, they held the ball extremely well and their locks Maro Itoje and Courtney Lawes looked very useful.

They muscled their way to a 16-13 lead courtesy of two Leigh Halfpenny penalties, but it felt like the air had gone out of the game.

An enduring memory I will take from this match is the Lions playing for scrum penalties with ten minutes to go, as a Mexican wave swept around the listless crowd.

It was smart rugby, playing to their strength, but also a little disappointing. I really wanted them to show us something, anything that resembled a fluid-attacking move. I’m sure I wasn’t alone.

However, the moment of match-winning brilliance came from the Blues and that man Sonny Boo again. Sonny Boo!

Sonny Boo delivered a great ball, but he was only one part of the movement, which included a deft touch from Steven Luatua and a searing run from Ihaia West to score under the posts.

We could barely watch as the Lions went deep into Blues territory. But despite finally showing the level of desperation required to test the tiring defensive line, they were unable to score.

I had mixed emotions as we left the ground.

The Lions improved from the previous match, but were still disappointing. The Blues were magnificent and gave their fans a moment to celebrate in a season of near misses.

My nephew had no such conundrums. As we walked away I asked him again who his favourite rugby team was. Without hesitation he replied, ‘the Blues’.

And he thought Sonny Boo was pretty good too.