It took the Cronulla fifty years, but they finally turned the porch light off and won a premiership.

At times, the Sharks have been a formidable team and a real contender. In 1978 they made the grand final, only to go to a draw and a replay the following Tuesday.

Although they made the Super League final in 1997, they were beaten easily by the Broncos. Fans had to wait another twenty years to finally get that first premiership.

Despite this, the club has produced some of the best players the league has seen, so with that here are their top ten players.

As always the one man per club rule comes into effect.

10. Andrew Fifta
The Sharks front rower made his debut for the club in 2012. He quickly became one of the powerhouses in the NRL. and began his representative career in the same year with selection to the Indigenous All-Stars team.

Fifita has since represented City Origin, New South Wales and Australia, playing 114 games for the Sharks so far. He was the driving force behind the grand final win in 2016, scoring a try to seal the deal and was later named the club’s player of the year.

9. Luke Lewis
Lewis was a premiership winner at the Panthers before arriving at Cronulla in 2012, possibly to wrap up his career. While at the club he has been selected for Origin and Test duties, as well as being named co- captain of the Auckland Nines squad in 2016 and being awarded the Clive Churchill Medal in the 2016 grand final.

It’s expected he will join the exclusive 300 games club by season’s end.

8. Jason Stevens
Stevens defected from the St George Dragons in 1997 due to the Super League war and was part of the Grand final team that lost to the Brisbane Broncos.

During his 167 games at the club, Stevens had a strong representative career, including 18 Tests for Australia and eight Origins for New South Wales. One of the hardest working forwards the club has ever had.

7. David Peachey
One of the best fullbacks the club has seen, Peachey started his career for the Sharks in 1994. He was a part of the 1997 grand final side and played 232 games, scoring 110 tries. In 1999, he was awarded the Dally M Fullback of the year award and played one game for NSW in 2000.

In 2003, Peachey was named in the top ten Cronulla Sharks Legends, as nominated by the fans and picked by a panel of rugby league experts. He won the Sharks’ player of the year in 1997, 1999 and 2001.

6. Matt Rogers
Like his father, Rogers was a great centre. Making his debut in 1995, Rogers played 123 games for Cronulla and racked up 75 tries as well as 406 goals.

He had the chance to work with Andrew Ettinghousen and then David Peachey, playing five Origins for Queensland and 11 Tests for Australia while at the club. He was lured off to rugby union in 2002 but returned to the NRL in 2007, joining the Gold Coast Titans.

5. Paul Gallen
Gallen is the only man to captain Cronulla premiership. With his 286-game (and counting) career, Gallen’s is approaching retirement, but what he has done will put him on the Immortal Sharks list.

Gallen captained NSW for six years and finally won back the Origin trophy in 2014, also playing 32 Tests for Australia. 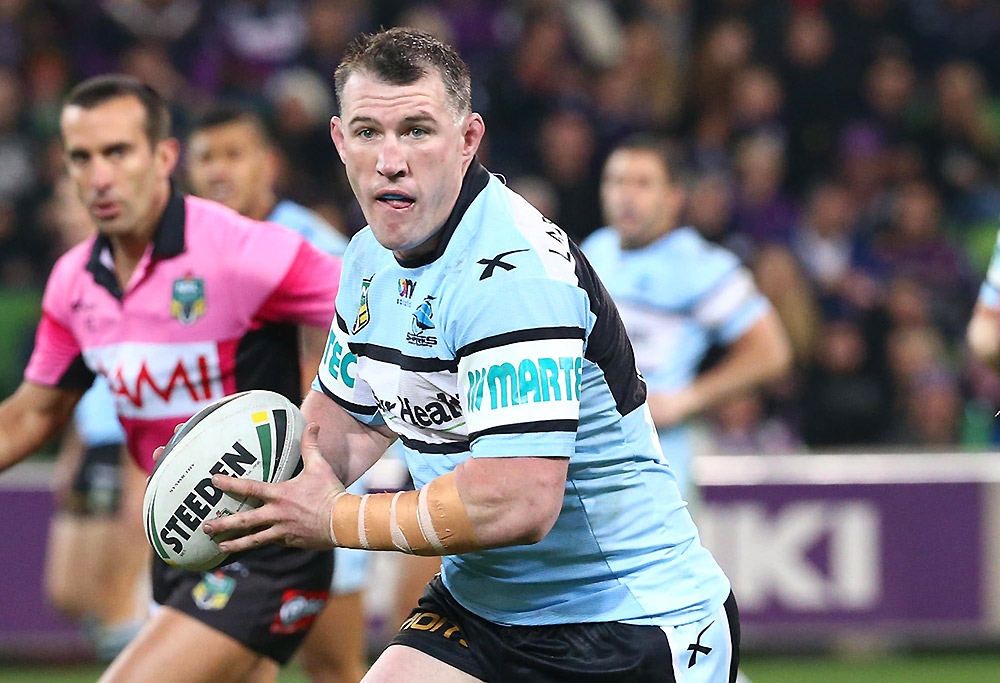 4. Greg Pierce
Joining the Sharks in 1969, he was part of the 1973 grand final loss to Manly and took over the captaincy in 1975. He captained the side to a grand final loss in 1978 and for decades went down as the greatest captain Cronulla ever had.

3. Andrew Ettingshausen
ET was the Sharks player of a generation and holds almost every record you could think of. During his 328 games at the club (club record and sixth of all time), ET scored 165 tries (the all-time Sharks record and fourth in the NRL).

Despite all that he achieved he goes down as one of the greatest never to win a premiership. With 27 Origins, he is the most capped Sharks Origin player, also playing 25 Tests for Australia.

A Sharks Immortal, he and Storm legend Matt Geyer carried out the Premiership trophy at last year’s grand final.

He is one of only three players to win the award from the club and the only player from the club to do it twice. After his retirement from first-grade rugby league, Miller was named as one of the five ‘Immortals’ of Cronulla

1. Steve Rogers
There is little doubting that Rogers was the greatest Shark of all time. Rogers made his debut in 1973 and was a rare talent, as described by his coach Tommy Bishop.

Rogers played at centre and appeared in the 1973 grand final loss to Manly, playing for Australia that year. In 1978 he captained the team to their second premiership attempt.

In 1981, Rogers was selected as the NSW Captain and was the only Cronulla player to do so until Paul Gallen thirty years later. He won the Dally M Medal for player of the year the same year.

During his 200 games at the club, he scored 82 tries and kicked 501 goals, still being the highest points scorer at the club with 1255.

Roarers, what do you make of the Sharks top ten?