A lot has been made of England’s transformation since their beleaguered 2015 World Cup campaign Down Under.

Back then, their 50-over tournament came to a fitting culmination as England scraped a win in a rain-ridden dead rubber against minnows Afghanistan. In effect, their revival started as all good English revivals do – drowning in a beer-swilled haze of good intentions.

England are indeed a team reincarnate. Throughout this year’s Champions Trophy we have heard ceaselessly that, in the 49 ODIs since that disastrous trip, England have reached 300 or more runs in 24 of them. Before that, they had scored over 300 in just 34 of 644 ODIs.

This is a side which has indeed embraced a new era of raw hitting and sheer pace, and which possesses a stubbornness which has kept the likes of Stuart Broad out of the side throughout that period.

Few teams, coaches nor captains would have persevered with such a move. England did. There is, therefore, much to celebrate, despite the knock-out stage capitulation – that is still one habit we must learn to overcome.

However, turning away from England for a minute, there is another team in this tournament who have found themselves duly transformed.

Ironically, there’s has manifested in an almost opposite manner – that of understated precision. Pakistan’s last defeat of England in the knockout stages of a major limited overs tournament is remembered for two things – firstly the self indulgent speech of then captain Imran Khan on receiving the coveted 1992 World Cup trophy, and secondly the ferocity with which Pakistan’s seam attack, spearheaded by Wasim Akram, blew away England’s batsmen.

This was the age of Waqar Younis, Imran Khan and Wasim Akram, for whom aggression, arrogance and speed was a winning formula. These were fast bowlers at the height of their power, unrivalled since the West Indies’ fearsome foursome over a decade earlier.

For years it came as a constant surprise that Pakistan, who share a 3200-kilometre border with India, could produce such a rabid pace attack while their neighbours struggled for decades to find an effective seamer who could exceed 130kph.

A different millennium and Pakistan find themselves once again in a limited overs final, once again having overcome a highly fancied England side.

It hasn’t all been such a smooth transition of course; we are well versed on the corruption, political turmoil and inconsistency that has plagued Pakistan cricket in the interim.

Pakistan’s most recent chapter however, has been heavily influenced by one man – Mickey Arthur. Before taking over as Pakistan coach, most of us this side of the Pacific knew of Arthur for one reason alone – his infamous clash with a handful of Australia’s top players for imposing homework on them – ‘homework-gate’. 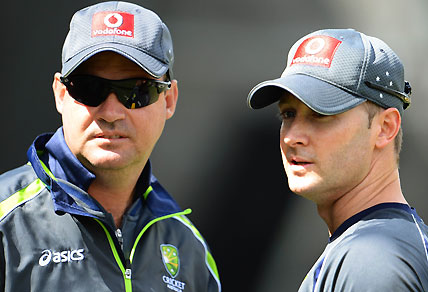 Australia’s brusque confidence perhaps didn’t suit the South African. Instead, like so many of his current players, Arthur wound his way towards Pakistan’s national side via their Twenty20 tournament, the Pakistan Super League, or the PSL

Arthur’s brief stint in the PSL was nothing if not inglorious, as his team, the Karachi Kings, came fourth in a five-man tournament. Yet it was enough to propel Arthur to the role of Pakistan head coach and crucially, to have given him a taste of contemporary Pakistan cricket, confined as it is to the outskirts of the global game.

Arthur’s tenure might be defined through a comparison to the Pakistan side of 1992. Where Imran’s cornered tigers were perceived as being both supremely confident and at times unruly, Arthur’s Pakistan possess a humble sincerity, allowing them to become masters of controlled precision.

While Misbah-ul-Haq may longer be at the helm, his quiet understatement prevails within today’s ODI team.

According to the Champions Trophy’s analytics supplier, CricViz, in this year’s tournament Pakistan’s seam bowlers average speeds were more than 2kph slower than the tournament’s fastest attack, Australia. In their semi-final against England, Pakistan’s average seam bowling speed was 132.8kph, compared to their opponent’s average of 136.8kph.

While England looked erratic and out of control, Pakistan, once the masters of that art, were now the purveyors of controlled precision. Instead, Pakistan’s seamers turned to deviation off the pitch, producing 0.56 degrees of it to England’s 0.48.

It wasn’t just their bowling either; Pakistan’s clinical and athletic fielding versus South Africa in another must-win match just days earlier was in stark contrast to the Proteas’ tired display.

Such a comparison would have been unheard of just a couple of years ago and many of today’s cricket fans will have grown up watching replays of Jonty Rhodes flying through the air to demolish the stumps – and Inzamam-ul-Haq doing the same but in an entirely different manner.

England’s resurgence over the past couple of years is no doubt remarkable. Pakistan’s tale, however, is a never-ending blockbuster. Arthur has much credit to take, but he, as everyone else, can only be left wondering what the next plot twist might bring.