If the Raiders want a premiership, there's one obvious man to turn to

It’s the end of June and Cooper Cronk still has no home for the 2018 season. Retirement is looking the most likely option for the Storm and Queensland great.

Most of the clubs aren’t interested in contracting a 33-year-old player, no matter how well he’s playing.

The Roosters’ roster is full, with Mitchell Pearce and Luke Keary forming a great partnership.

The Rabbitohs may have some interest but they have Adam Reynolds, Cody Walker and just spent some coin on Dane Gagai.

The Bulldogs, previously seen as Cronk’s most likely destination, have spent their money on Aaron Woods and Kieran Foran.

The Sea Eagles have Daly Cherry-Evans and he’s working out just fine right now, thank you very much.

The Eels have Mitch Moses, Corey Norman and Clint Gutherson, so they seem sorted.

The Panthers duo of Nathan Cleary and Matt Moylan is clearly settling nicely and needs no change.

For all the talk of Jimmy Maloney leaving the Sharks, the good money is on he and Chad Townsend being the halves in 2018.

The Dragons have put all their eggs in the Ben Hunt/Garett Widdop basket and aren’t in the market for Cronk.

Those are all the Sydney clubs accounted for.

So the likelihood is that Cronk will end his career where it began, as a 300-game, one-club Storm man. 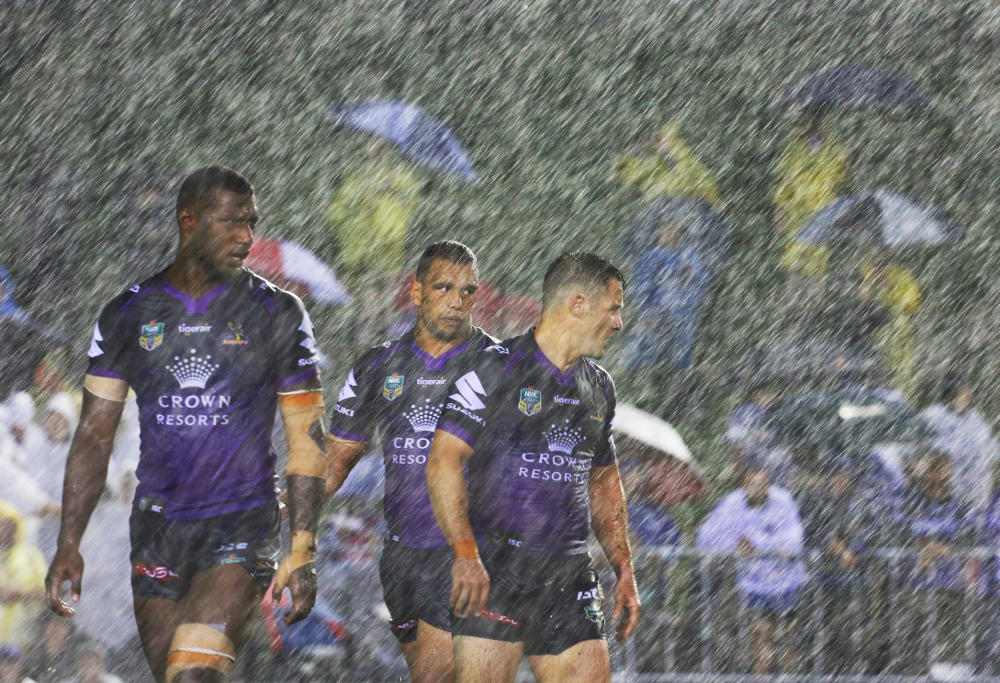 However, there are still two options he could go with.

The Knights have apparently put a quite decent offer on the table and made concessions in regard to how much he actually has to turn up during the week.

However, it’s unlikely that Cronk would want to end his career at a club clearly in the rebuilding stage, with little chance of making the finals, let alone of winning a premiership.

That leaves just one option: The Canberra Raiders.

While Cronk is moving to Sydney to be with his partner, it is a 90-minute commute each way via plane door-to-door from his home in Sydney to the Raiders’ training facilities. That’s comparable with the commute from Bondi to Belmore or Penrith on a bad day.

Something hasn’t clicked at the much hyped Raiders this year. While all the pieces seem to be there, they are not playing as a cohesive and organised unit. Neither Blake Austin or Aiden Sezer seem to be guiding the side around the park with authority.

The last tackle options are often poor and release pressure. Joey Leilua and Jordan Rapana are trying to do too much themselves, often breaking from the structure. While they are getting some results it hasn’t been enough and is damaging to the sides overall structure and game plan.

Cooper Cronk could fix that very quickly. He could focus the immense potential of the Raiders almost immediately and make them a genuine premiership contender immediately.

Ricky Stuart is unlikely to have any plans to replace Sezer or Austin, and Cronk has probably not even considered the Raiders as an option.

But there’s no denying that the pieces fit. The Raiders would love to capitalise on the strength of their current squad and Cronk – if he does actually want to play on – is a supremely competitive man who would want to go out a winner and could do just that at the Raiders, while still being far closer to his partner.

Only two teams can win the premiership. It’s been the case all year and still is the case. Storm or Roosters. The only thing that’s changed is the ‘pretenders’ are no longer the Raiders and the Eels. It’s now the Panthers. There’s still value in the trade. Go long with both the Storm around $4 […]

Almost one year to the day Canberra’s grand-final dream turned into a nightmare by a refereeing decision, an irate Ricky Stuart has taken square aim at the NRL officials.

Canberra have made Josh Papalii a Raider for life with the star prop signing a deal that could see him at the NRL club until the end of 2025.