The Rainbow Six Siege Pro League is making its debut down under.

For the second year of its esports drive, Ubisoft have announced the addition of the APAC region to their competitive circuit. In doing so, the way has been paved for international competition and local support, with big finals are set for Sydney and the world stage a prize on offer.

Starting in July Ubisoft is running the Rainbow Six ANZ Cup, a qualifier event open to all, with the top eight teams advancing to both the ANZ Invitational (with a prize pool of $5000 AUD) and the larger APAC Pro League.

While the Invitational will pit the best of the best in ANZ against one another, the APAC league will give the top two teams a battle against 6 teams from Japan, South-East Asia and Korea.

This is where the Global finals dream is ignited, after a Sydney hosted final on October 21-22, the top two teams will play in Sao Paulo in November. 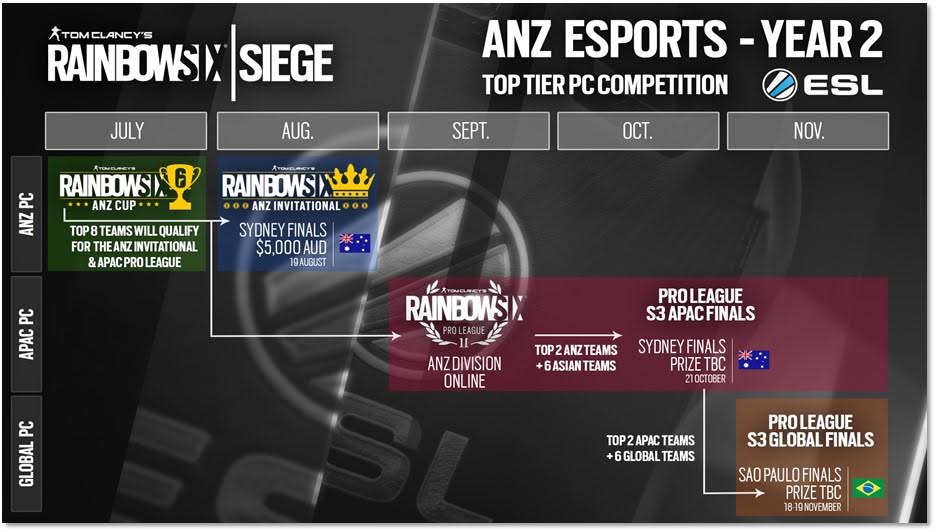 That may sounds like quite the complex ladder, but a system like the above means that a huge amount of Australia and New Zealand-based players will get a shot at a vast array of differing skill and play styles from the region. This sort of competition is how a region grows its esport potential, allowing players tangible avenues forward alongside plenty of action for fans.

Though it may not be a heavy hitter like League of Legends, Rainbow Six Siege has been around for quite some time now in the esports world and has carved out its own niche in the shooter market. With the support the game has received as a platform rather than a yearly release, the player base has rallied alongside the evolving title and helped shape it to the competitive game we see today.

This isn’t Australia’s first foray into the world of Rainbow Six esports. Earlier this year even, Mindfreak had the chance to compete at the ‘Six Invitational’, a World Cup style event held in Montreal. With Mindfreak seeded first through four local major cups, the local scene is already being bolstered through regular competition.

Despite being the Xbox champions and the refocus to PC for the future competitive content, the players and interest are there. Forty one ANZ teams competed in a recent ESL ANZ Community Cup, and the upcoming qualifier will hopefully help cement the audience. With participation like this already being fostered in Australia, the move to add Rainbow Six Siege to the APAC region seems a perfect one.

There’s no king of shooters quite yet in ANZ (as hard as CS:GO fans may try), and with the other offerings being Overwatch and Call of Duty, the tactics and gunplay of siege offer something different.

For now though, it’s a step in the right direction for the scene, and for the fans and players wanting more Rainbow Six action.

You can keep up to date with everything Rainbow Six Pro League right here.