The centres of conundrum at Eden Park

It all seemed so clear a couple of weeks ago. The dark New Zealand spearhead with returnee Kieran Read at its sharp tip, enacting Kapo O Pango; Sonny Bill Williams standing tall and offloading in those inside channels; the All Blacks winning again at Eden Park, their spiritual home and fortress. All was right with the world.

Move the sporting theatre on to wet and windy Wellington, and the finger of Warren Gatland has stirred those once-lucid waters into something of a muddy whorl. The All Blacks gave us their ‘stock’ haka Ka Mate, Sonny Bill saw red for a dangerous shoulder charge on Anthony Watson, and the Lions owned ‘route one’.

Where the All Black forwards had dominated on the carry at Eden Park, at the Cake Tin the roles were reversed.

The Lions, meanwhile, found the extra momentum up front in the rain that they had lacked the weekend before.

This was one important factor in deciding the fate of the game because it meant New Zealand could not simply expect to repeat the medicine they had administered at Eden Park and achieve the same result. The Lions had to stop the All Blacks in channel one and they did it convincingly.

But it was Sonny-Bill’s reckless action, the red card in Wellington and his subsequent four-week ban – coupled with the unfortunate injury to New Zealand’s most reliable ‘glue’ midfielder Ryan Crotty – which has really opened up Pandora’s box for the third Test, and given the Lions a more realistic opportunity to win the series than even Gatland and his coaches could have dared hope for before it all started.

Meanwhile, Steve Hansen would have been hoping to navigate the entire series (and beyond) with minimal changes to the initial midfield selection of Beauden Barrett, Sonny Bill and Crotty.

Instead, he is likely to have to rip up the blueprint and come up with an entirely new combination for the final Test. He has urgent questions circling overhead and the answers are not returning to their keeper’s wrist as readily as they once did.

Is Crotty fit enough to start? Does Anton Lienert-Brown stay at 13 or move inside to make room for Malakai Fekitoa? What role is there for Ngani Laumape after his outstanding ball-carrying display in Wellington?

At the same time, Gatland rolled the dice in his own midfield and took the courageous decision to drop Ben Teo after his fine performance in the first Test. He picked twin playmakers in the shape of Johnny Sexton and Owen Farrell, who had not started a tour game together before.

Gatland will have other selection questions of his own in this last week of the tour too – among them, whether to replace penalty-prone Mako Vunipola with the technical proficiency of Jack McGrath given the presence of French scrum-stickler Romain Poite on the whistle, and where to find a more productive partner for the excellent Maro Itoje in the second row.

By my calculations, Alun-Wyn Jones had only 60% of the involvements Itoje enjoyed on the carry and in the tackle, he won no lineouts and restarts compared to Itoje’s seven, and turned over no ball compared to Itoje’s three disruptions at the lineout, in the maul and while pressuring the kicker.

But let’s stay with the central topic of midfield selection for both sides – and start with the Lions.

Did the twin playmaker axis really work at Wellington? The short and simple answer is that it worked in attack but not so well on defence.

The Lions were able to control most of the first quarter of the game by using Sexton and Farrell to probe potential weaknesses in the All Black defensive screen.

The Lions’ characteristic attacking shape with Sexton and Farrell in harness first appeared at a scrum in the 9th minute. 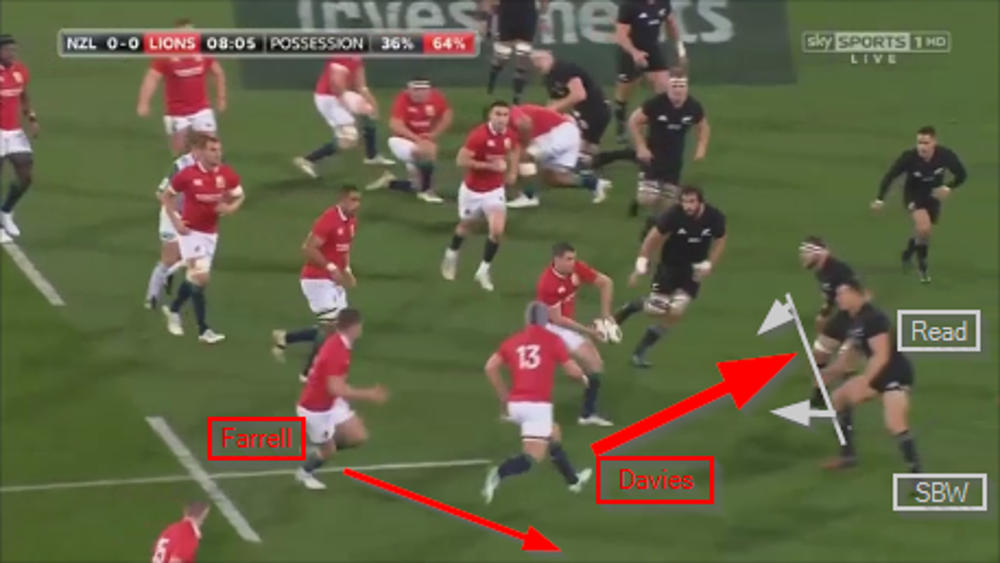 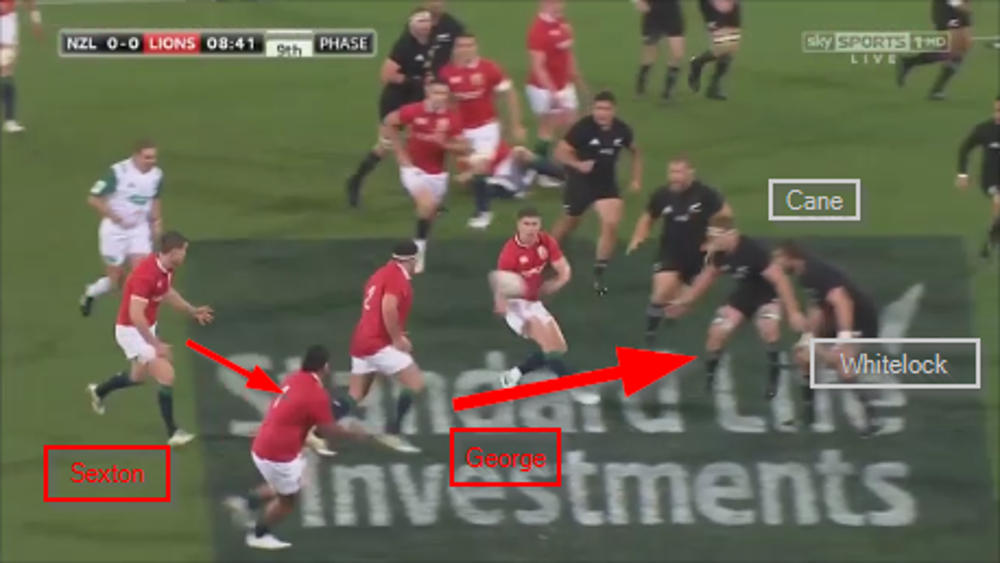 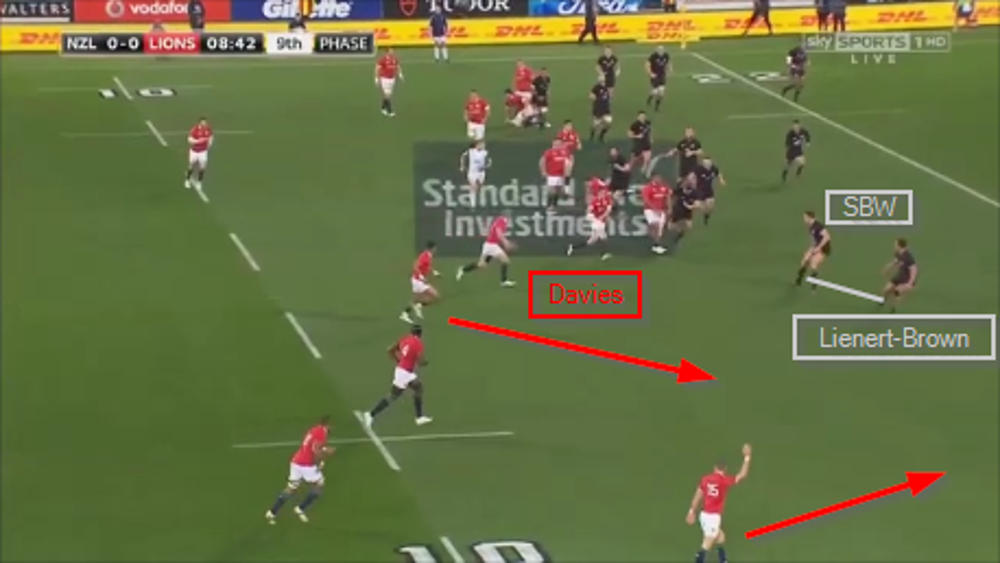 On the third phase, Sexton is at first receiver, with Jonathan Davies crashing down on a hard ‘unders’ line and Owen Farrell fading out behind to play the role of a distributor in the outside third of the field. The idea is to use the threat of Davies to fix the two All Blacks defenders in front of him (here Kieran Read and Sonny Bill) and give Farrell some space in which to operate.

The threat can be viewed in the second and third frames from later in the sequence. Here the Lions’ hooker, Jamie George, is playing the Davies role and Sexton and Farrell have interchanged at first and second receiver.

George has fixed the two Sams (Whitelock and Cane) quite successfully, and the Lions have obtained a promising wide attacking position in the final screenshot. There is only Rieko Ioane (out of shot) and the two New Zealand centres opposing five Lions attackers – but Davies drops the ball.

Even then, the Lions managed to recover the situation and create a chance for Liam Williams down the right-hand touchline. 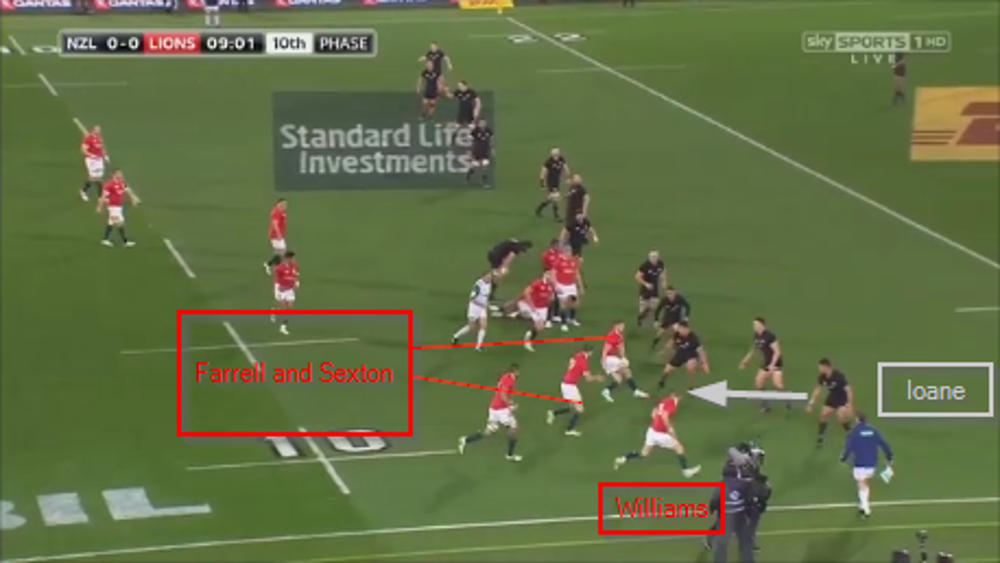 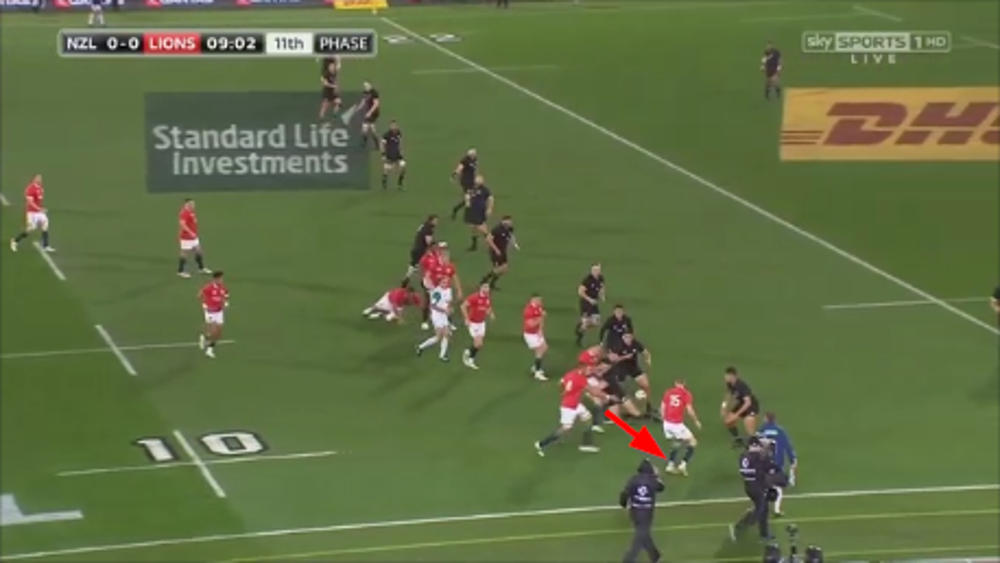 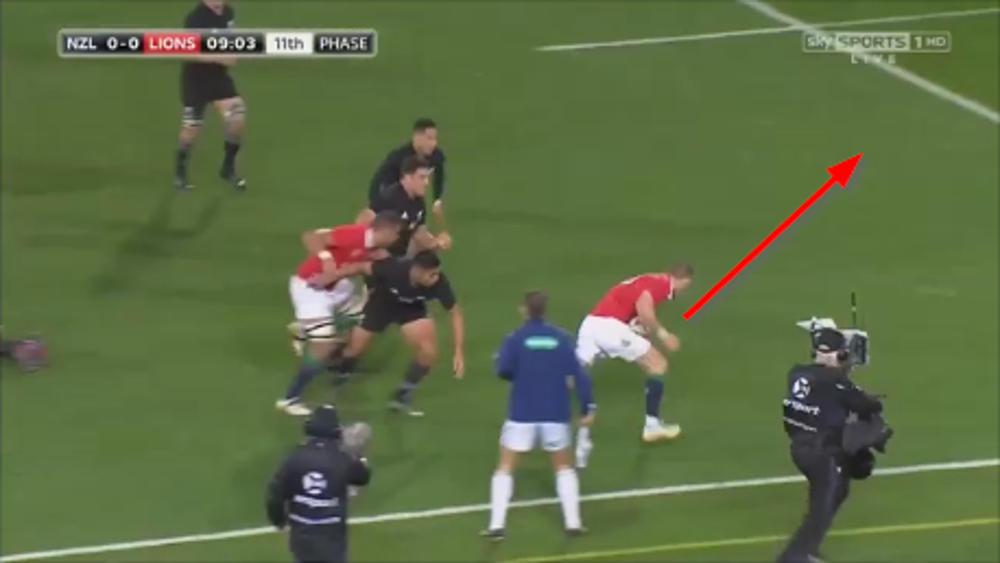 The presence of Taulupe Faletau in the space between Sexton and Williams creates doubt in the mind of the last defender Rieko Ioane, and eventually he picks the wrong option, biting in on Faletau as Williams receives the pass.

Once again, the Lions shoot themselves in the foot by making a careless mistake in a scenario they have won. Williams has already overrun the play in the first frame, and Sexton has no choice but to deliver a pass which travels slightly forward in order to put him away.

Although they did not create a score in this sequence, all the Lions’ groundwork on their twin playmaker attacking shape was not wasted. It paid out real dividends in their two second half tries.

The first try comes from a lineout won on the New Zealand 40-metre line. The variation on the basic attacking shape occurs via a wrap-around no.12 by Sexton – but building blocks are still the same; a hard ‘unders’ blocking run by Davies, with one of the two distributors looking to exploit the space outside him: 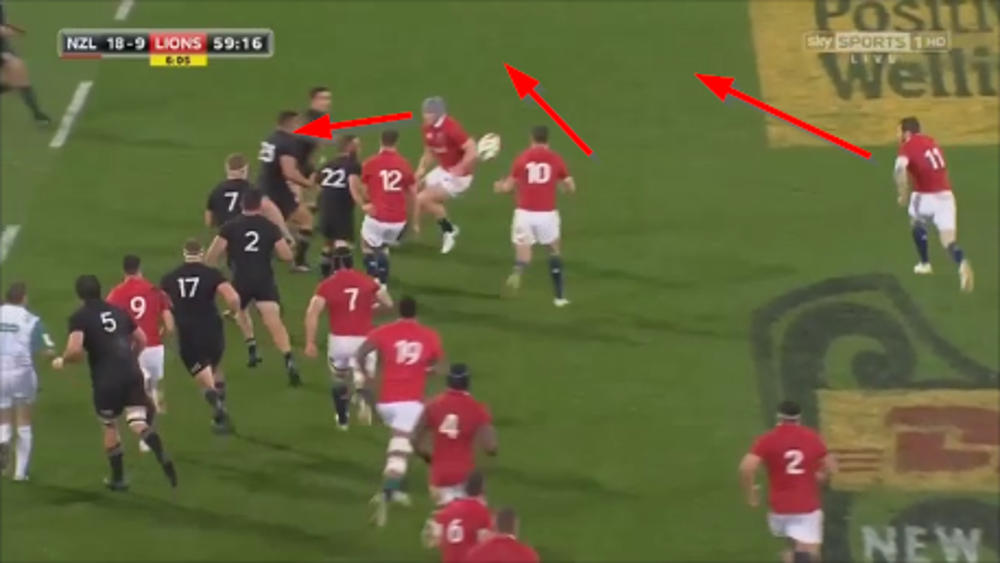 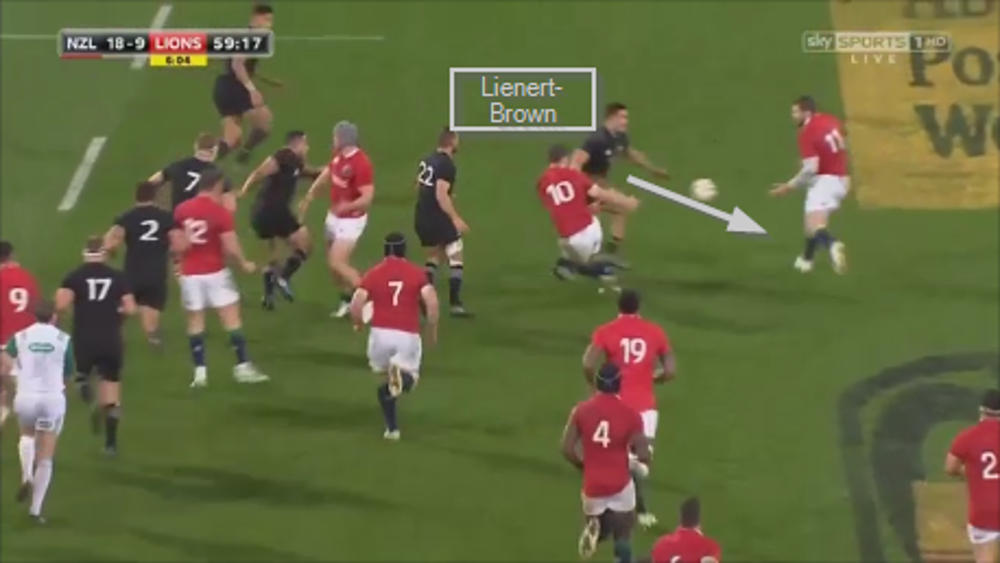 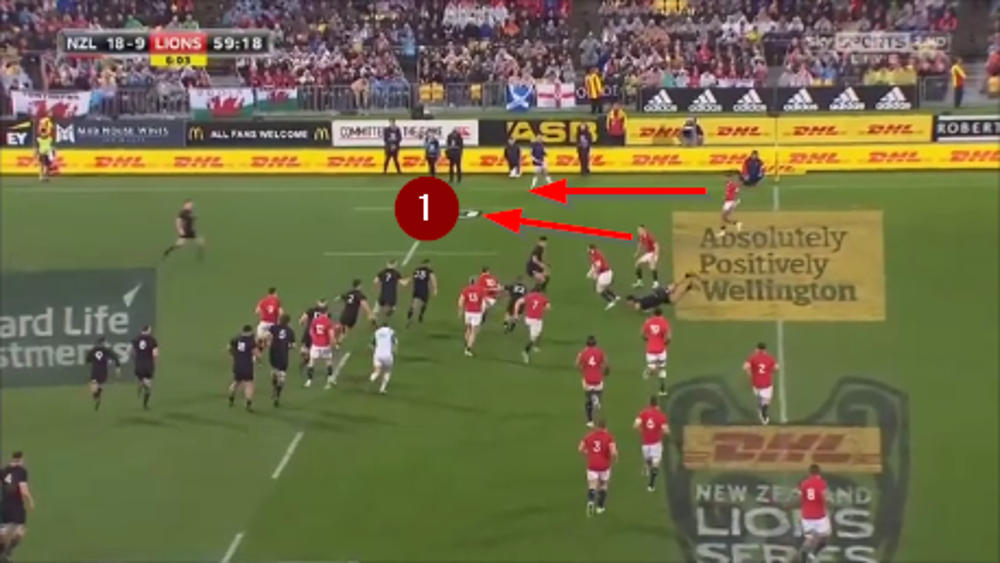 The Lions have what they want. Lienert-Brown gets his angle on Elliott Daly wrong and suddenly there are two Lions attackers (Williams and Watson) lined up against the New Zealand fullback Beauden Barrett.

Two phases later, with play coming back in the other direction, Sexton and Farrell link up more straightforwardly, and Farrell’s long pass gives Williams and Faletau the chance to run at the last two Kiwi defenders and make the score.

Was it an accident that the Lions’ best scoring chances all occurred over the left side of the New Zealand backline defence featuring three relative newcomers – Lienert-Brown at 13, Ioane at 11 and Ngani Laumape (when he subbed on for Jerome Kaino) at 12? No, it was not.

The Lions’ second try was also created in the same area, by springing the trap the Lions had carefully constructed in the earlier part of the game. After a couple of prep phases from lineout, at 67:19 on the highlight reel the same Lions’ set-up we observed earlier appears. 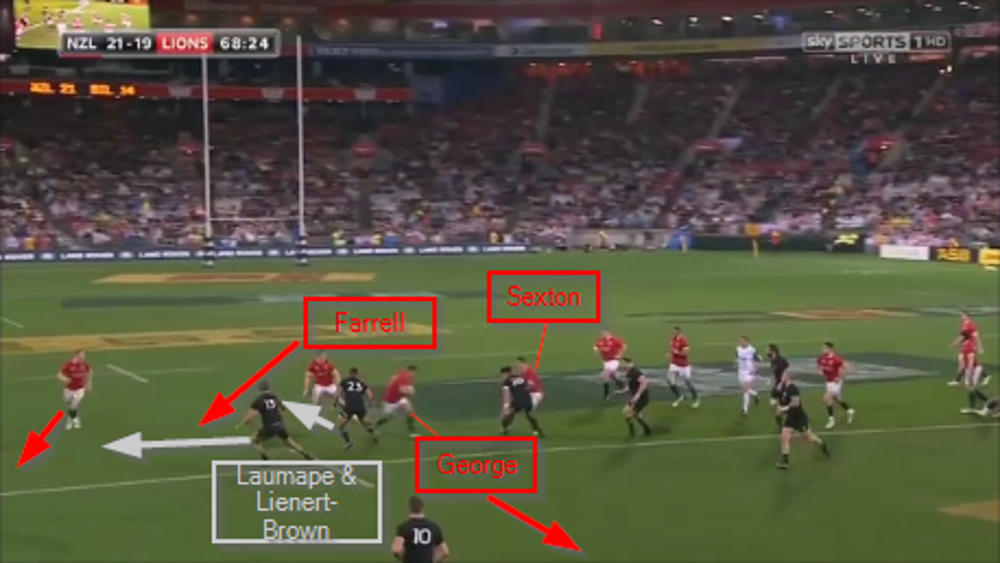 This is where the payoff occurs against New Zealand’s inexperienced centre combination over the left side. Laumape and Lienert-Brown are already over-defending the move the Lions’ had been running all game – the ball behind from Sexton to Farrell.

With Laumape making his read and shifting across, the way is open for Sexton to deliver the money ball to Jamie George for the Lions’ hooker to make a bust. Conor Murray ran through the middle to score on the very next play.

The story was very different when New Zealand had the ball and were able to run at the Lions’ midfield defence from early phase set-piece. In this context, Ngani Laumape was superb, taking New Zealand forward yards and yards over the advantage line. 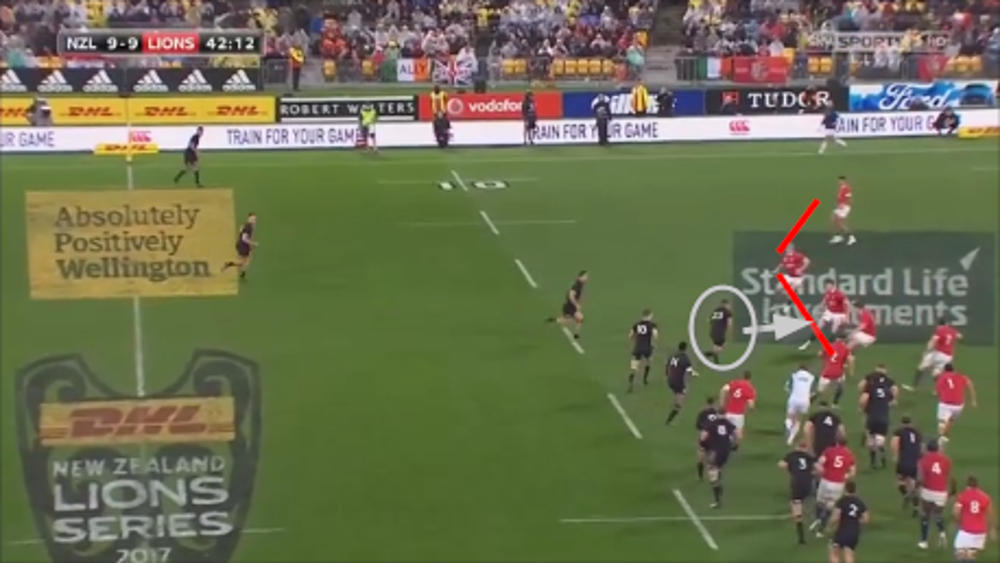 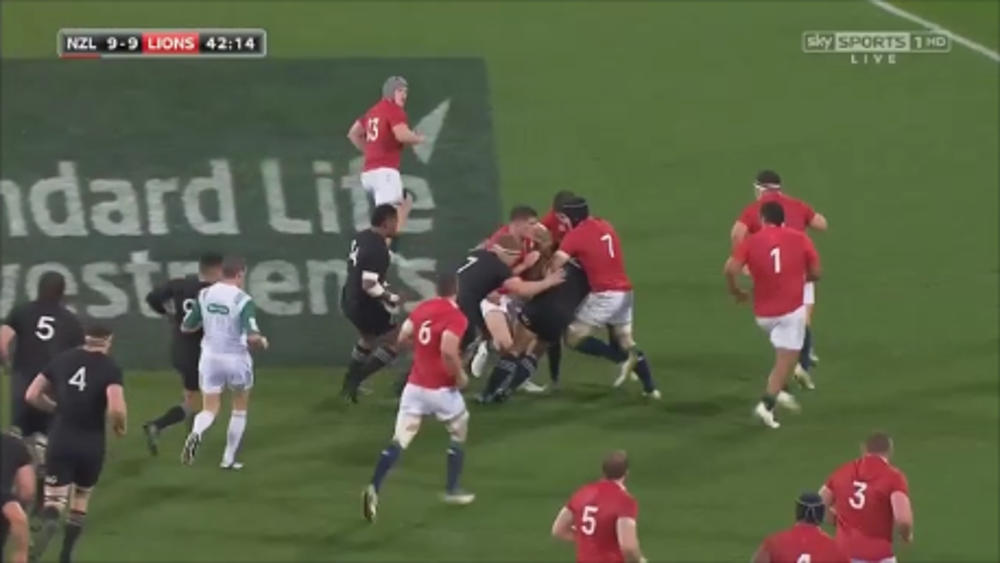 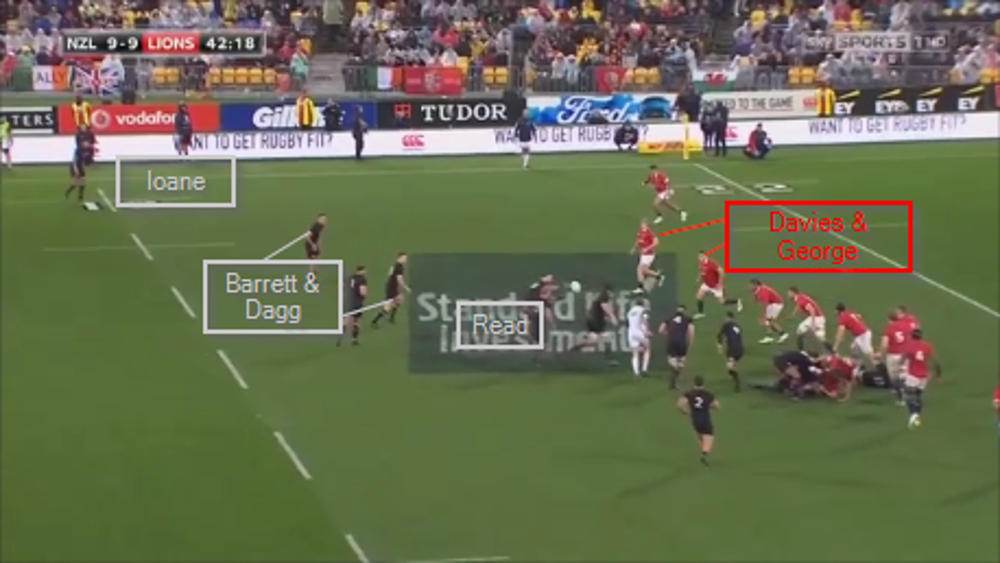 Laumape is headed straight for the seam between the two Lions playmakers, making five metres after the initial contact. In the second frame, he has absorbed three key defenders (Sexton, Farrell and Sean O’Brien) at the first ruck.

The extent of the damage Laumape has done is only really clear in the critical third frame. With Sexton and Farrell out of the picture, the defender inside Jonathan Davies is none other than the hooker George, and he only has Antony Watson for company outside him.

The Lions’ line-speed has been defused and, with the world’s best ball-handling forward Kieran Read at first receiver and Barrett, Israel Dagg and Ioane out beyond him, you would think this is the ideal opportunity for the All Blacks to move the ball out towards the left sideline.

Instead, Read kept the ball and ploughed forward into contact, and at this point I began to wonder whether the All Blacks’ narrow game-plan had subtracted something from their essential identity, as an attacking team which prides itself on using all fifteen players across the width of the field.

The same scenario recurred later in the match, as if to wash any remaining doubts from my mind. 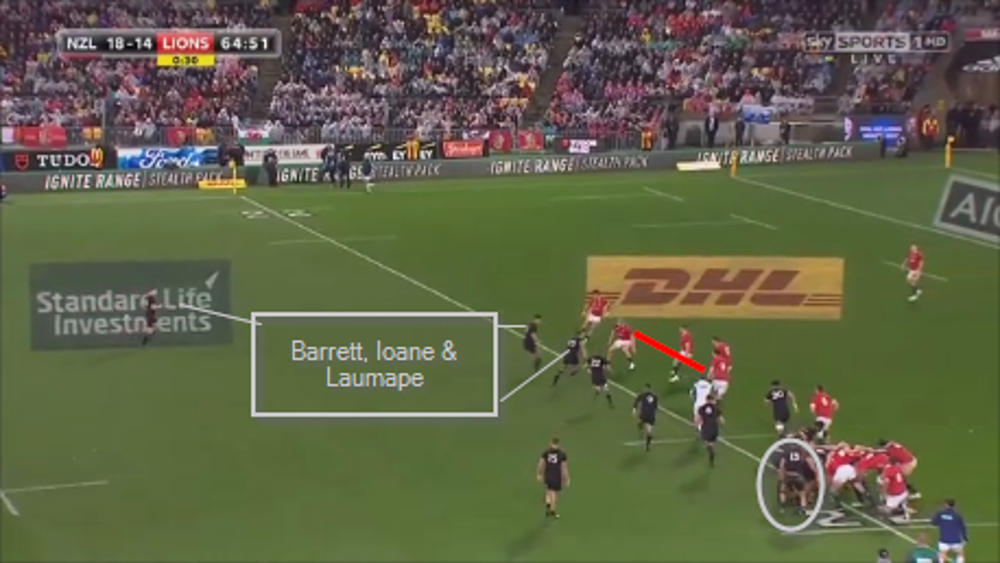 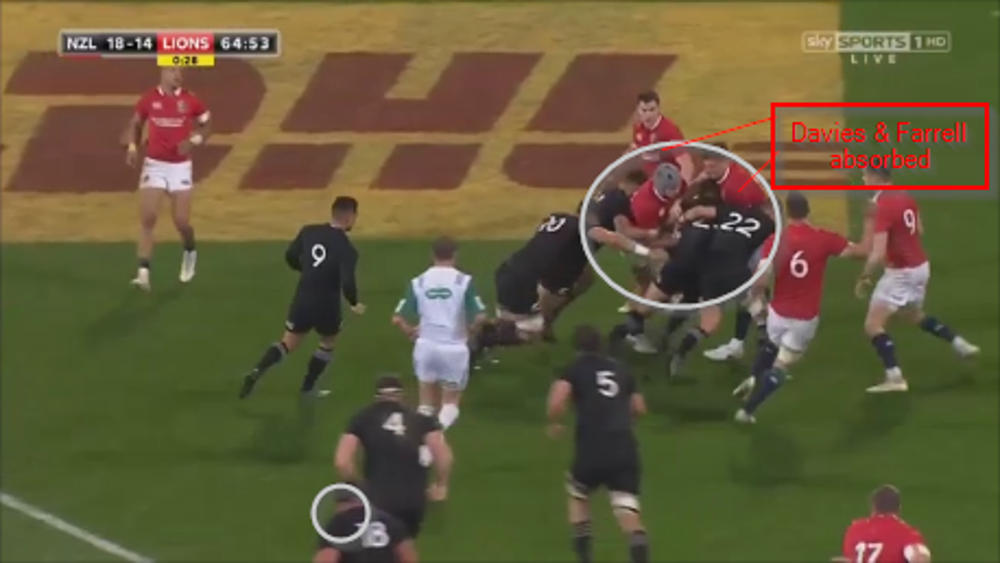 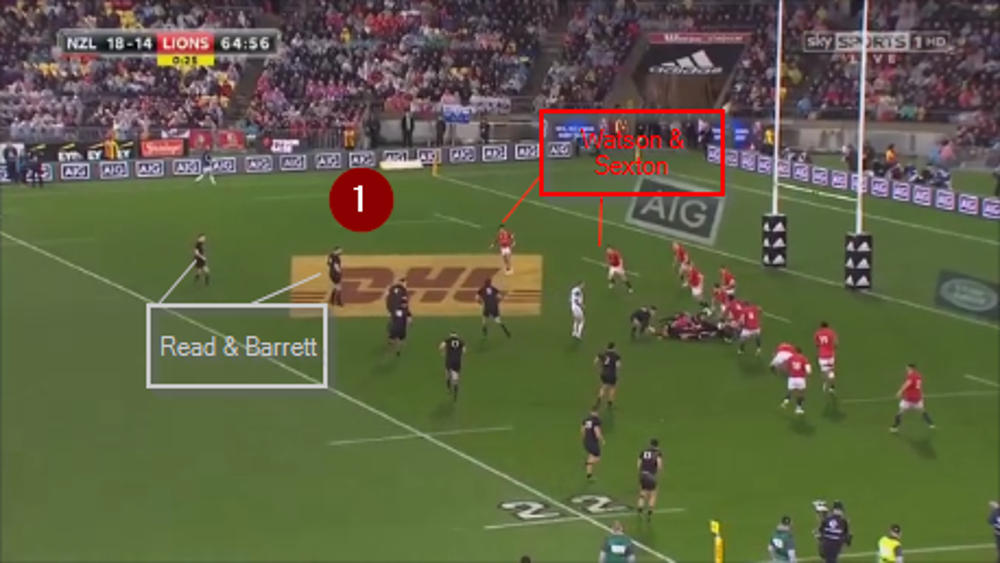 From a right side scrum on the Lions’ 22, Laumape crashes into Davies and Farrell, advancing fully 15 metres over the advantage line, with ten of those metres being made after the initial contact with the defensive centres.

If Barrett is not in the side to exploit just this kind of open-field running opportunity, what is he in the team for? Not primarily his goal-kicking, that is for sure.

Summary
The build-up to the third and final Test at Eden Park will be one of the most fascinating in living memory, especially in terms of selection for both sides.

Strangely enough, I found this article I wrote many moons ago, anticipating the same crucial components the Lions have in place now – Sexton, Farrell and Davies in the midfield, and the same back five forwards (with Faletau in for the injured Billy Vunipola).

At the same time, events have moved on again, and Warren Gatland and his coaching group may now have to discuss a couple of positions in the tight forwards – loosehead prop and the best partner to Maro Itoje, as well as how best to improve their early phase defence in midfield.

The All Blacks are probably in a rare state of uncertainty about the selection of their own midfield trio. If Ryan Crotty is anywhere near match-fit, surely he must play to stabilise the defensive organisation in that area – and there may be a case for Malakai Fekitoa at 13 for exactly the same reason.

Ngani Laumape made such an impact as a ball-carrier that he too will be hard to ignore. Above all, which centre pairing will give Beauden Barrett the opportunity to justify claims that have been made on his behalf that he is indeed the best rugby player on the planet – claims which have yet to bear scrutiny after two Test matches of the current series.

As it stands, Barrett has not had the opportunity to do any of the things he enjoys doing the most on a rugby field.

The All Blacks must be favourites, but the Lions have real, solid grounds for believing that the impossible dream may yet come true.