The on-site announcers’ initial instinct, and mine as well, was that the Greater Western Sydney Giants’ current streak of draws to Geelong and Hawthorn was a first in VFL-AFL history.

They’re forgiven for not remembering the last occasion – it was 96 years ago.

In 1921, Carlton put back-to-back draws together in Rounds 4 and 5 against Fitzroy and South Melbourne (nee the Western Bulldogs and Sydney Swans). And there are some interesting details about that 1921 season and those Blues worth exploring.

First of all, to encourage the GWS fans, that particular Carlton team finished a clear first on the ladder, eight points clear of the Richmond Tigers with a 16-game record of 13 wins, just one loss and those two draws.

However, to discourage GWS fans, because of the format at the time Richmond had to defeat Carlton twice in a row to win the premiership – and did so.

In consecutive October Saturdays, Richmond won by margins of eight and four points. Their final 36-32 victory was played in front of an MCG crowd of 43,000 on October 15. Times change.

There were just nine teams in the VFL at the time. In their final 1921 ladder order, they were Carlton, Richmond, Collingwood, Geelong (the four finalists), Fitzroy, Melbourne, South Melbourne, St Kilda, and Essendon. (Hawthorn, Footscray, and North would join in 1925, and finish 1-2-3 for the wooden spoon that season.)

With every team playing each other twice in 16 games over 18 rounds (each team had to have two byes to make the schedule work), there were therefore only 72 games played across May through to September. Five of those games were draws, including three of the eight games played in Rounds 4 and 5. (Seven percent of the games were draws that season.)

As amazed as we all were having four of nine games during Round 14 this year within three points, we should really consider that fifth round of 1921. During the first week of June, two of the four games were draws.

South trailed Carlton at every break before tying the Blues at 10.10.70; Melbourne and St Kilda played a high-scoring, back-and-forth game ending at 90 apiece).

Additionally, a third game was decided by just one point, a Richmond comeback victory over Collingwood for their first defeat of the season, 53-52.

In fact, Melbourne also had two draws in the opening five weeks of the season (Round 5 and an opening round draw with Essendon, 78-all), plus a one-point victory against South in Round 4 and a bye in Round 3. So, after four games, the Demons were 1-1-2, with a percentage of 87 per cent due entirely to their 44-point loss to the Magpies in Round 2.

The ladder after five rounds was actually very intriguing – if you’re intrigued by draws:

Fitzroy didn’t win its first game until Round 8 (though their draw came against the eventual minor premiers), yet still ended up fifth, just out of finals.

The final ladder saw four of the nine teams with two draws on their record, although of them only Carlton was a finals-bound club (the other five teams all had draws, and Fitzroy, the Saints, and the Bombers each finished with two).

With the lower scores of that era, you might think draws would be a more regular occurrence. Not particularly: in the three seasons between WWI and 1921, there was only one draw in all (Geelong-Fitzroy in August of 1919, each scoring 11.9.75) over the span of 216 games.

Afterwards, however, there were two in 1922 and exactly one draw in each of the next five years before the tie-less season of 1928 (when Hawthorn would have loved a draw, going 0-18 instead), including the only blemish on North Melbourne’s 0-17-1 record in 1926. 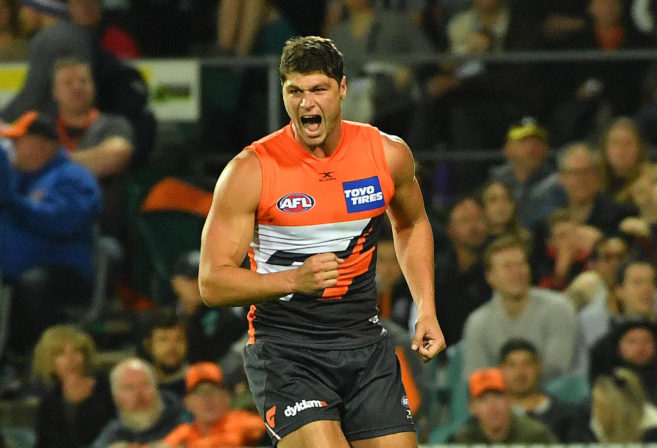 What about the effects of this draw on 2017?

The happiest team after the Tassie tie had to be the Adelaide Crows, whose superior percentage suddenly became important again. For GWS, a tie was almost as bad as a loss: they’ll undoubtedly stay behind the Crows in percentage over the last seven rounds, and now Geelong have the sole advantage of being ‘out of sync’ with the two leaders.

But over the last seven rounds, the Crows have no rollover games, where they could sleepwalk and still win like their first half against the suddenly hapless Doggies. They’ve also got to play third-placed Geelong, sometimes-outstanding-at-home West Coast and Essendon on their home decks, and Sydney and Port in the Adelaide Oval.

Expect them to drop, oh, let’s say two of these. That puts them at 16-6, pn 64 points, and undoubtedly the highest percentage in the AFL. (Even dropping three games keeps them in the top four.)

Meanwhile, GWS get tough games against Sydney and Richmond the next two weeks. But if they win those, they’ll be big favourites in the next four, hoping to put top two in their pocket before going to Geelong in Round 23. Split the first two, win the next four, and they’ll have the equivalent of 16 wins even before Round 23, which would then determine first or second place on the ladder.

The Cats have the hardest remaining fixture of the top three – they play Adelaide, GWS, Richmond and Sydney in their last seven, with games against Carlton, Hawthorn, and Collingwood to pad the schedule around those gut-busters. Even saying they’ll split those fantastic four and win the other three, they’re still at 62 points, a half-win behind the top two at the end.

Richmond, on the other hand, could rip through five of their opponents with the Giants and Cats their two remaining tough games. But at just 9-6 after the embarrassment on Saturday night, splitting those two games still only gives them 15 wins, likely behind the top three.

Similarly, Port Adelaide have only their crosstown rivals standing between them and being favourites in all of their remaining games. Give them those six wins and they’re in the same position as Richmond.

It seems highly unlikely that the top four won’t come from four of these five teams at this point: these projections put all five between 60-64 premiership points. The Tigers look to be the odd one out, with the lowest percentage.

Melbourne have three of the teams above them still on the schedule, plus St Kilda, their personal bogeyman. So five wins would be superb. West Coast have to finish against the top two teams in the competition the last two weeks – they’ll probably also lose to the Saints at Etihad to go 4-3.

St Kilda have a beast of a schedule remaining, with only Essendon and North not a top eight opponent. Three wins would be about right. Sydney still have to face GWS, Geelong, and Adelaide all on the road – give them one of those three and that gives them five wins.

And we can’t ignore Essendon, even at 7-8, with a schedule where only the Crows will open definitive favourites against them. So even allowing for a hiccup along the line (Saints next week?), pencil in five more wins, making 12.

Those are the only five teams who are left to compete for the three remaining finals places following Adelaide, GWS, Geelong, Port, and Richmond.

So, Melbourne should reach 13, and could reach 14 wins. For Sydney 13 is more likely, and Essendon, St Kilda, and West Coast should all end with about 12 wins. Right now, the Bombers have the best percentage of the three, and would also win the most games between here and September, suggesting they’d raise their percentage the most as well and take the eighth spot behind the Demons and Swans.

Sing a dirge for the Bulldogs, who have dropped 30 points in their ELO-FF rating over the last 13 rounds, and gone 2-11 against the spread since then. And they’re still the strongest candidate of the bottom eight remaining teams.

Gold Coast, Fremantle, and Hawthorn don’t have the consistency to pull off six out of seven wins, which would be the minimum required of them, and none of the others are close enough even with a 2014 Richmond end-of-season change of form.

Before I wander off for another week, here’s an update on the ‘once-around’, faux-17-5 schedule that sees every team play every other team once. (All the Spreadsheet of Death has to do is remove the re-matches.)

Of course, not everyone has played the same number of non-duplicate games yet.

If you’re interested in the 18-4 model, where each team plays a crosstown rival twice and all others once, I’m tracking that as well. So far, the only differences are marked with asterisks above: add one to the given win-loss column for those teams to see their 18-game record.

Last thing: what are the differences between expectations and accomplishment on the field? Well, comparing the Spreadsheet Of Death’s compilation of game-week predictions this season with actual results, here are the most overachieving and most underachieving teams:

Under
Western Bulldogs (-3.9 wins under expectations, no surprise), West Coast (-3.3), a tie between Adelaide and GWS (-2.7 each, because we expect them both to win every game), and Port Adelaide (-2.3), which surprised me, but when they started out so strongly, they instilled a ‘we’ll win everything vibe’ like the top two did.

By the way, the top eight team with the best overachievement mark right now is Richmond (+0.4, which dropped precipitously after 92-10 at half-time Saturday), with Melbourne now right behind them (+0.2). North (-1.0) and Collingwood (-0.3) are the only teams in the bottom eight that have lost more than expected.

The Greater Western Sydney Giants finished seventh in 2021, with 11 wins, one draw and ten losses, although they are effectively sixth for the purpose of this exercise, due to their semi-final performances against higher-rated teams. They had six debutants, while only four players featured in every game: Callan Ward, Harry Himmelberg, Tim Taranto and […]

GWS coach Leon Cameron has revealed that Toby Greene made an emotional apology to the player group in the lead-up to Friday night’s semi-final loss to Geelong.