It is a competition, not a gentlemanly ride around France

It has taken exactly one Grand Tour for cycling’s so-called ‘unwritten rules’ to be thrust back into the headlines.

It seems that some riders of the peloton have learnt nothing from the Giro d’Italia that finished only months before.

The controversy this time involved an attack by Fabio Aru during Stage 9 at the same time Chris Froome had a mechanical and required a bike change. The attack was short-lived as it was quickly shut down by Richie Porte and others. In fact, it appeared that when Porte caught up to Aru, he told him to show some respect for the yellow jersey.

An admirable act at the time by Porte, given that Froome was his main rival.

Again the unwritten rules came into focus at a Grand Tour. According to these rules, riders must wait for the rider wearing the yellow jersey if they have a mechanical, crash or some other misfortune.

Porte and other riders enforced the rule to nullify Aru’s attack.

Aru naturally told waiting journalists that he did not see Froome put up his hand to indicate he had a mechanical. It did not stop the finger pointing. Froome later told journalists “we will have to see what Aru has to say about it”.

He also said “I’ll certainly ask him about it when I see him.”

While Froome was said to be downplaying the incident, other riders were not impressed with the unsportsmanship behaviour shown by Aru. Porte commented that, “this isn’t the moment to attack the yellow jersey when he’s changing his bike”. Simon Yates also told journalists after the stage “I think it’s a dirty move. I don’t like what he did but it’s a bike race and he can do what he wants.”

As the media storm brewed after Stage 9, I started to think that the riders forgot what happened to Tom Dumoulin at the Giro d’Italia. Riders attacked him when he had a violent attack of diarrhoea and stopped for a nature break while he was wearing the pink jersey.

Vincenzo Nibali summed it up well after the Dumoulin incident when he said, “I’m very straightforward. I never expect anybody to wait for me when I stop. Many times, I’ve fallen or punctured and just set off again.”

There are countless other examples where riders have attacked the leader when they had a mechanical fault, such as Alberto Contador’s attack on Andy Schleck during the 2010 Tour.

So why did Aru have to defend his tactics or actions? It is a competitive bike race.

These unwritten rules came into effect at a time when cycling races were amateur or the prize money was almost non-existent. The sport has changed significantly since then. 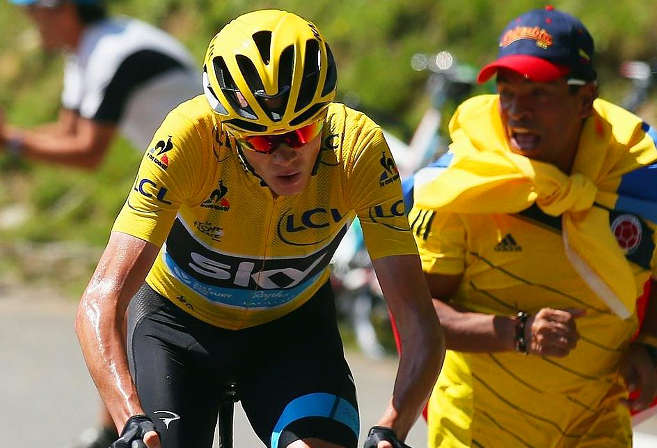 To win a Grand Tour requires a superhuman effort. A rider must withstand significant mental pain and physical stress on their bodies. Their cycling equipment needs to endure all types of conditions.

They need to prove they are the best rider, the fastest rider and also the rider with the best equipment. But that is not all, they have to stay healthy for three weeks and keep their bike upright in different conditions.

The final descent into Chambéry on Stage 9 illustrated the importance of having good bike handling skills, after several riders came down in treacherous conditions.

Secondly, cycling seems to be the only sport that requires participants to wait for the race leader when they have a mechanical or a crash. Have you ever seen a Formula One or a Supercars race where competitors circle the course slowly while the leader returns to the pits to get a new car after a mechanical fault or crash?

The answer is no because to win the race you need the perfect car setup as well as being a very good driver. In fact, race teams employ the best engineers to help get an advantage over other teams regarding car step up.

So if it does not happen in motor racing, why does it continue to persist in cycling? Also, why do only some riders enforce this rule?

It is time to banish this unwritten rule to the rubbish bin once and for all. Cycling’s governing body need to interject and outlaw the behaviour to provide certainty to riders when this situation arises in future races.

There is clear evidence that not all riders follow the rule and they will attack the leader. Just like Aru did. And before him Nibali, Nairo Quintana and Ilnur Zakarin at the Giro. Riders should not be placed at a disadvantage all because the race leader has some type of mishap.

Others will think that this practice is unsportsmanlike. But team leaders are not protected like this in one-day races. So why should Grand Tours be any different?

The team leader does, after all, have eight other riders in their team to support them in their quest to return to the peloton.