With New South Wales’ exciting new dynasty of State of Origin domination halted after just the one game, the 2017 series headed to an unlikely decider.

Here are the ratings from the third State of Origin.

Triskaidekaphobia
Grade: D
As the game drew ever closer to kick-off, there were concerns in the New South Wales camp that the match would be played on July 13. Coach Laurie Daley, who has suffered from triskaidekaphobia (fear of the number thirteen) for decades, was almost inconsolable.

Luckily, captain Boyd ‘The Rip’ Cordner counted out the 21 days since the last game on his fingers and toes and whatnot to prove that the match would in fact take place on July 12.

Great work from Cordner. Sadly, he was unable to cure Daley’s Tedesco-decked-ophobia (the fear that James Tedesco will be knocked unconscious by a late and/or high Dylan Napa tackle) and Try-scored-Nyet-ophobia (the fear that a New South Wales try will be erroneously denied when The Bunker is compromised by Russians).

The pressure of Origin coaching clearly getting to Laurie.

Johnathan Thurston
Grade: A-
What Daley should have actually been afraid of was, of course, his side’s inexplicable favouritism with the bookies.

Oh, sure, Johnathan Thurston wasn’t playing. But his maddening match-winning presence was everywhere. Before the game, Phil Gould went Full Phil Gould with a typically meaningless pseudo-analysis of Thurston’s heart rate during the final conversion in the previous game.

After all that, Ray Warren emerged to breathlessly inform us about Cameron Munster’s attempts to fill Thurston’s shoes. Why Munster didn’t bring his own shoes to the game remained a mystery. Amateurish stuff from the debutant.

Spines
Grade: A
Munster’s crass footwear error didn’t seem to inhibit his performance one jot, however. From the moment the national anthem – inevitably sung by Johnathan Thurston – finished, Munster, along with Billy Slater, Cooper Cronk and Cameron Smith put on a masterclass display.

The Melbourne spine showed why they are the game’s deadliest skeletal system. Because like the Grim Reaper they seem so determined to emulate, the quartet scythed effortlessly through New South Wales in the first half to send Queensland to the break 12-0 up.

In fact, New South Wales were lucky the margin wasn’t larger with both Smith and Cronk bombing certain tries, along with a missed field goal just on half-time.

Should Queensland coach Kevin Walters have yanked the pair off at half-time for their sloppy play? Probably. It would certainly have made the game a lot fairer. And ultimately, isn’t that the important thing?

Alternatively, consider that if you average out the Victorian home of the quartet with the Queensland side they represent, you surely end up somewhere deep in the middle of New South Wales.

As far as I’m concerned, they’re therefore all New South Welshmen in spirit. Let the record books be adjusted accordingly. 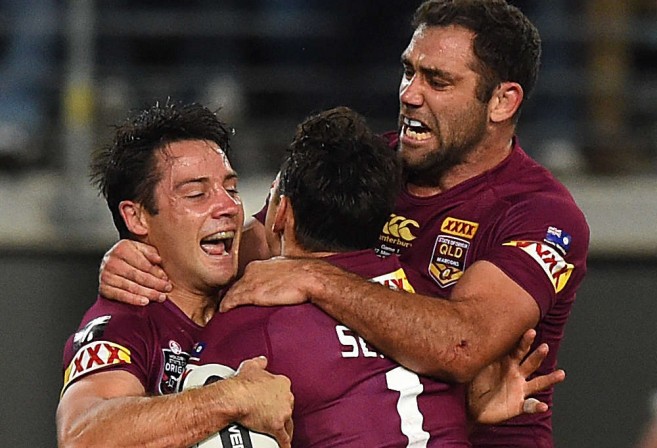 Half-time Chat
Grade: D
The half-time break gave the Blues a chance to regroup and attempt to formulate a plan to work themselves back into the game.

Would they abort their overly macho game plan of attempting to prove that completing a set of six is a sign of weakness?

Would they lobby the NRL to instead have the game result measured by Nine’s new Telstra Running Around Like Headless Idiots Tracker, a scoreboard on which they were utterly thrashing Queensland?

Or would they revert to their successful Game 1 plan of having Mitchell Pearce knocked unconscious?

Regardless of their choice, New South Wales would have realised that if Queensland had been able to recover from a similar deficit in Game 2, then they could surely turn the tables and repeat the feat in Game Thr… hahaha. Almost got through it.

No. New South Wales were doomed.

Valentine Holmes
Grade: D
While the Blues came out after the break with renewed gusto, that gusto was only sufficient to see the score reduced to 12-6, via a Josh Dugan try.

So more gentle breeze-o than gusto, I guess.

Yes, Pearce followed the Dugan try by almost immediately setting up another. But sadly for the Blues, it was a try to Queensland, with the halfback racing out of the defensive line to allow Munster the opportunity to put Valentine Holmes over for his hat-trick.

Isn’t it time for the authorities to limit each Queensland player to just the one try per game? These greedy Maroons have been getting away with this avaricious nonsense for years. Time to say enough is enough.

Hell, Valentine isn’t even a proper name. Unless you’re a saint. Or a holiday designed to make single people feel awful.

So, on reflection, fair enough, I guess. Because by the time renowned speedster-prop Jarrod Wallace went over untouched to make the final score 22-6, Queensland’s 11th series win in 12 years was secured. Which I suppose is impressive, if tedious repetition is your thing.

But show me a better one-game dynasty.