The Maroons became great because they have had a great spine.

Commentary that Queenslanders have more belief and are better coached is just lost money and broken hearts talking over a clear-thinking narrative.

To say Queenslanders Mal Meninga and Kevin Walters are superior coaches to Blues Mark Murray, Craig Bellamy, Ricky Stuart and Laurie Daley is folly; as it is to boast Queenslanders are more passionate.

You are always going to win a lot of games with Billy Slater at fullback, Cam Smith as hooker, and Darren Lockyer, Cooper Cronk and Johnathan Thurston as your choice of halves.

Smith and Cronk are so well organised that the great Thurston can miss a game and a rookie like Cameron Munster can slot in and star.

The current Australian spine does not have a NSW Blue, but if it was selected today on form, James Tedesco is the only player who could be mentioned in the same breath as the great Queenslanders.

NSW do not have a half with big-time game management like Thurston and Cronk – we have to go back to 2005, when Andrew Johns dominated. That fact alone is a blight on our game in NSW.

What are all the junior coaches doing? Queensland have at least three halves and two hookers who did not play in the Origin series this year that would have likely made the Blues team.

The chances of NSW going on multiple years of Origin series wins will not happen unless Tedesco can find some mates.

Mitch Pearce, James Maloney and Nathan Peats are all excellent club players, but will never be remembered like their Maroons counterparts.

Peats does not kick, run or create points like Smith. He did not make a single tackle break during the series.

Pearce’s long and short tactical kicking is poor, and he does not manage the big occasions like Cronk and Thurston. He also had zero line breaks and try assists for the series.

Maloney missed 22 tackles in the series, conceded five penalties and made an error. He’s light years away from Thurston and Lockyer, and a raw rookie named Munster spanked him. 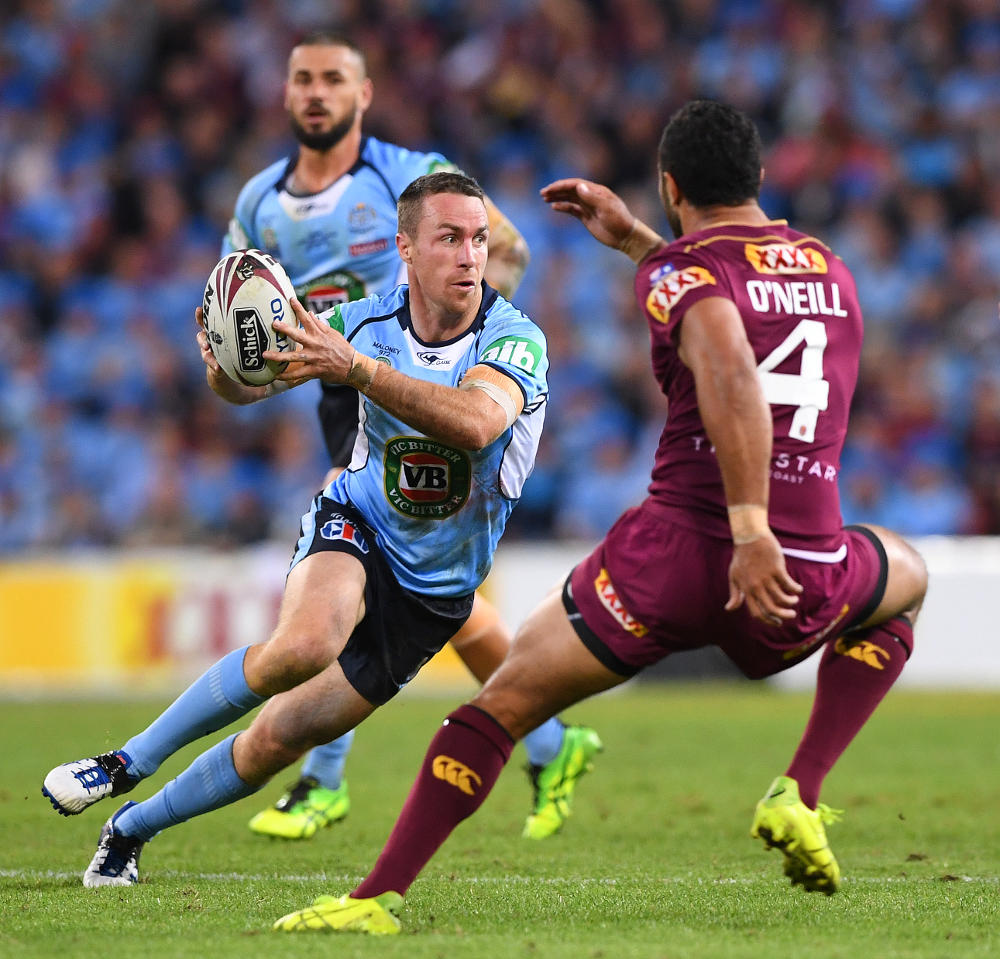 Who have the Blues got in the locker to complement Tedesco?

Sadly, the only player in the same class as Teddy is Tom Trbojevic, who happens to also play at fullback. Fortunately, he can also play centre and wing, which will enhance the Blues, but that does not help the spine.

Young Panthers skipper Matt Moylan has recently been moved to 6 at club level, and he has the world at his feet. He is critical to the future of NSW as one of the few shining lights who can contribute to the spine.

Moylan’s club half Nathan Cleary is the young gun with the big boot, but his last-tackle options have become predictable and would not trouble the Maroons.

Who are the exciting young hookers putting their hands up? The short answer is no one.

The Dragons’ Cameron McInnes, at 23, is just as good a defender at Peats, but is more dangerous with the ball and has a kicking game. The much-maligned Robbie Farah remains the only hooker level with Cam Smith for linebreak assists in the NRL this season, but the ‘greedy’ groundswell was too much and he lost his job.

Peats is a media favourite and his work rate is outstanding, but as Smith demonstrated, the modern-day hooker needs to be able to run, scheme, kick and pass. The scary thing for NSW is that the aged Peter Wallace would have been the Blues hooker had he not been injured, and he has fewer skills than Peats.

Anyone else in the locker?

Tiger Jacob Liddle and Shark Jayden Brailey are certainly promising, but are years away from Origin.

Sea Eagle Apisai Koroisau should be considered next year. His downside is that he misses more tackles than any other NRL hooker, but that is because he tries to tackle everything that moves. He is actually an excellent head-on defender who hurts, and a brilliant ball runner.

Mitchell Pearce is a real enigma. How can a player be so dominant at club level and turn up on Origin night like a rabbit in the headlights?

His last tackle options were straight out of the Bulldogs’ manual: down the fullback’s throat!

I will always wonder how he would have performed without the burden of ‘running the team’ – if he had just played a running pivot role on the left side.

So after NSW burn Mitch Pearce at the stake, who will rise up to replace him? 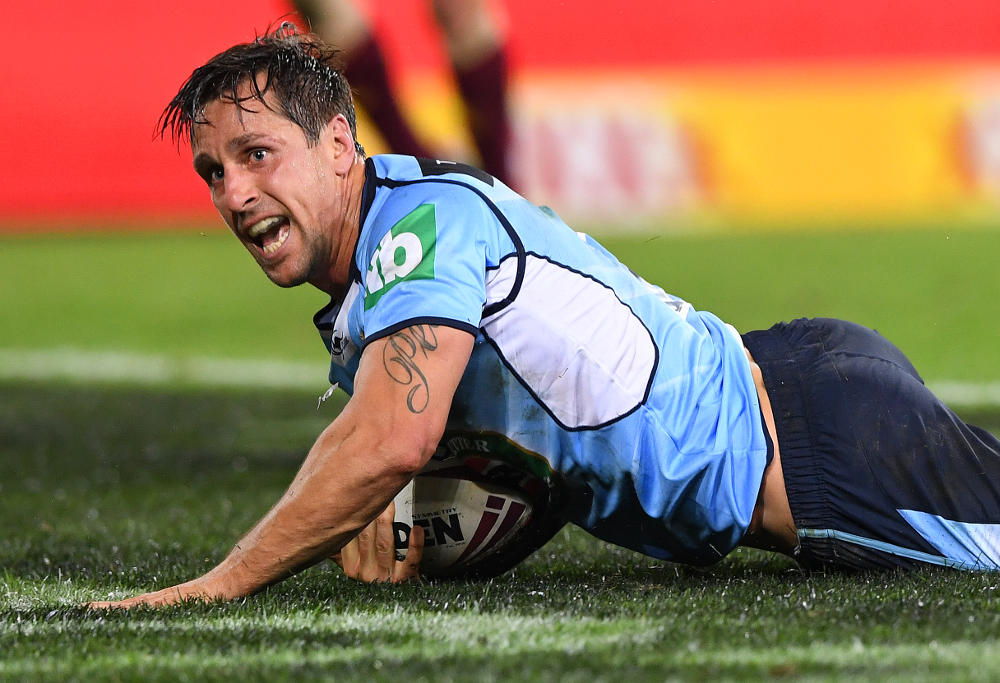 One of the biggest problems for the Blues has been tactical kicking, a skill at which Adam Reynolds is as good as Cronk, and the Rabbitoh’s also an expert goal kicker. He was not considered for Origin this year, as he kept getting injured, and his inability to run to the line like Pearce at club level counted against him, but Reynolds will come into heavy calculations for 2018.

Moylan and Trbojevic are rated in the top 13 players in NSW on my figures, so must be automatic selections.

Brett Morris has been excellent this series but is expected to retire from rep footy and Blake Ferguson never looked like scoring a try but let plenty in, including the initial tries in each match. The Blues will have Tom T, Josh Mansour and Josh Addo-Carr to consider next year. It is unlikely that massive talents like Latrell Mitchell and Nick Cotric will be considered Origin ready.

The Blues can play around with coaches, coaches’ advisers, change the backs and the forwards, but if they do not get the spine right, nothing else matters.

There has been some outstanding coaches in charge of the Blues over the last 12 years – including arguably the best ever, in Craig Bellamy – so to lay any blame on Laurie Daley is way off the mark. This was not a coaching error, the coach does not make a player pass with the line open, nor does he kick a winning goal from the sideline.

NSW were one pass away from Daley winning this series. They had it won with less than four minutes to go. There is no doubt the players were well prepared, they just lacked on-field leadership qualities when it counted.

I disagree with Phil Gould when he said, “I don’t think this is about the selections.”

The Maroons proved in Game 1 that they got it horribly wrong at the selection table and by Game 3 they had made an unprecedented nine changes, while the Blues chose to pick and stick.

It is not always about selecting the best players analytically, but also the players who have a high ‘trust factor’. Trust is what the Maroons have in spades.

These are players who may not be flashy but you would go to war with, players who the coach knows will do a job for him and he can trust not to let his teammates down.

These are players who defend well under fatigue, who do not make unforced errors nor concede dumb penalties.

You will note that the Storm players in the Maroons team, which include the entire spine, all rate highly in these important areas and have been curiously mentored by a former Blues coach, Craig Bellamy.

Smith did not hesitate to suggest to Kevin Walters that Cam Muster should play the key pivot role, because he knew he could trust him.

Queensland had a better spine, particularly a superior hooker and halfback, both of whom thrive on the big stage.

You can trust them!

For the NSW Blues, the hunt starts today.