Cam the Conqueror on track for stellar season

Fresh off captaining Queensland to a miraculous State of Origin series win, what is there left for Cameron Smith to prove?

This year he has eclipsed the record for most goals kicked by any player, which is a marvellous feat given his position on the field and the amount of work he gets through.

Smith may be in for the greatest year ever, by any single player. Here are the accolades he could finish with by December 31.

He’s won the early mid-season competition already and was lucky enough to captain Queensland to victory. So what else can he achieve by the end of 2017?

Currently, his team are red hot favourites to win the competition in 2017. The Melbourne Storm have looked better than ever and show no signs of slowing down.

Let’s take that all into account. If the Storm win the grand final this year, Smith will have won the major NRL title also, and as captain once again.

What is the one award that has eluded his illustrious career? Funnily enough, it is claimed in a grand final.

If Smith leads his team to a premiership victory this season, he has every chance of winning the only medal that has eluded him – the Clive Churchill medal.

In all his previous three grand final wins, Smith has lost out on the medal to a bunch of random players by the names of Cooper Cronk, Billy Slater and Greg Inglis. 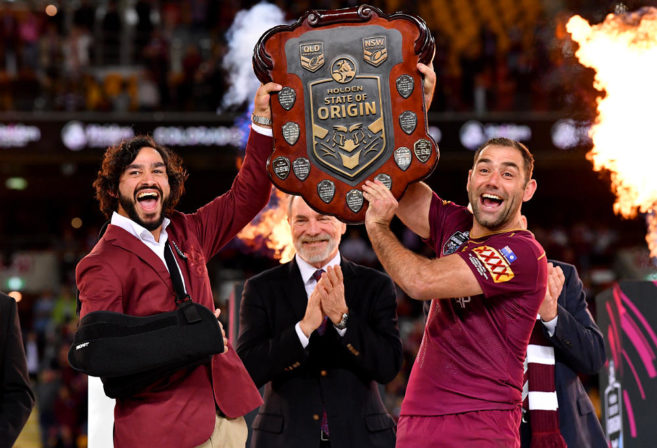 One record Smith will definitely surpass this season (barring a freak accident) is that held by Darren Lockyer for most NRL games. He’s only a handful of games away, and is set to achieve the milestone come season’s end.

Smith is also currently, as of this minute, ahead in the Dally M player of the year voting, by a long, long mile. He has only won this award once before (2006) so it would be another nice milestone to his career.

All these accolades in one NRL season seems insane, but we haven’t even moved on to the international portion of the football calendar.

The World Cup is at year’s end and Cam will definitely be the skipper of the ever dominant Kangaroos side. With their most formidable opponents struggling for form, who will actually challenge Australia?

If Smith adds that trophy to his list, he will have won all the three major titles, as captain. Crazy, huh?

The final award, in which he has every right to be in the running for, is the prestigious Golden Boot gong. This award identifies the world’s best player for that given year.

Smith, a previous winner himself, could top off a superb year by winning the top gong in world rugby league. Storm teammate Cooper Cronk is the current holder of the Dally M and Golden Boot awards, but Smith may just take them both in the following year.

All these incredible stats and accolades may sound preposterous for a normal player to achieve, but Smith has shown he is no ordinary player.

He is the greatest hooker of all-time, hands down. And probably the most influential player to ever play the game, getting better with age.

I believe Smith will achieve all of these accolades and as a result will record the greatest single season the NRL has ever seen from a rugby league player.

All hail, the future Immortal!

Tonga’s herculean defeat of the Kangaroos in Saturday night’s Oceania Cup match was one of the feel-good moments of 2019 in rugby league, but it also highlighted a major flaw in the international scheduling of the code. You can’t give enough credit to the tenacity and passion of the Tongan side last night in their […]