Good luck trying to knock the Storm over from here

The State of Origin period can often be hard on teams like Melbourne, but they have come out of it looking even more likely to win the premiership than they did before it began.

Their ‘big three’ – Cameron Smith, Cooper Cronk and Billy Slater – are intact, and each of them was afforded valuable time off from club games to allow them to cope with the added strain of the representative period.

That was something Storm coach Craig Bellamy preferred not to do in the past, but with Smith and Slater both now 34 and Cronk 33, it was necessary.

But not a necessary evil, as it turned out, because the Storm have emerged from the Origin period still on top of the competition table.

And Cameron Munster is now a representative star as well.

Munster’s Origin debut for Queensland in the series-deciding Game 3 was brilliant. He announced himself as the clear successor to Johnathan Thurston at five-eighth for the Maroons as they beat NSW to win another title.

Now, he is set to come out of Origin as an even more confident and composed player than he was before breaking through at that level.

Munster is a potential ten-year representative player, a superstar in the making, and the Storm are blessed to have him as the careers of hooker Smith, halfback Cronk and fullback Slater move closer to the end.

Cronk won’t be at Melbourne after this season, so this is the one chance Slater, Munster, Cronk and Smith will get to win a premiership together as the quartet in the key spine positions for the club. 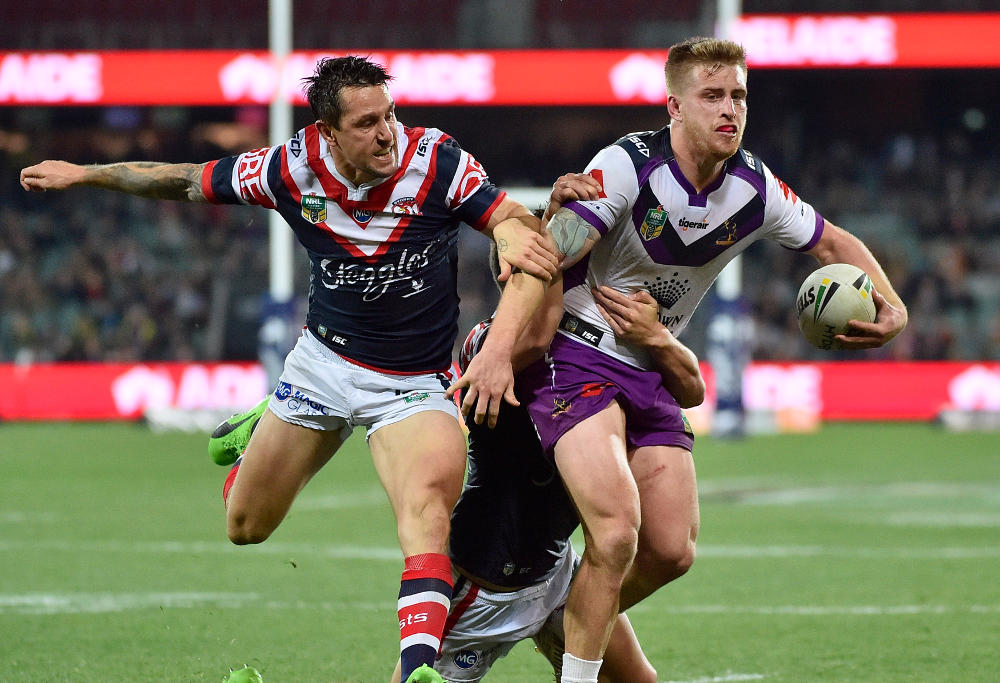 If Melbourne don’t have rotten luck and fall apart due to injury at the business end of the season, how well is some other team going to have to play to deny them the title?

The Storm have also picked up forwards Nate Myles and Robbie Rochow from other clubs during the Origin period, significantly boosting their forward depth.

Jordan McLean will be back from injury eventually and when you add those three players to Jesse Bromwich, Tim Glasby, Felise Kaufusi, Tohu Harris, Dale Finucane, Kenny Bromwich, Nelson Asofa-Solomona and Joe Stimson it is clear how very well Melbourne are travelling up front.

Glasby, of course, will be another Storm player who comes out of the Origin period a better player after appearing in games two and three for the Maroons. His confidence will have skyrocketed.

Wingers Suliasi Vunivalu and Josh Addo-Carr have scored 27 tries between them and centre Will Chambers is a champion.

Centre Cheyse Blair is gone for the rest of the season through injury, but expect to see Young Tonumaipea fill in well for him. It’s just the way things happen under Craig Bellamy’s coaching. He gives his players clear and simple jobs to do and they are perfectly prepared to do them.

Some recent performances by two of the other teams regarded as major contenders have been alarming – the 44-12 loss by the Sydney Roosters to Cronulla and two losses by the Sharks themselves, 35-18 to Manly and 30-10 to Gold Coast.

The Storm haven’t had any such dramatic slip-ups. Easily the biggest of their four losses this season was in their most recent game, 22-6 against Parramatta, but that was when they were minus their Origin stars.

Melbourne begin their post-Origin run in to the finals with an away game against Canberra on Saturday night.

It has the potential to be a difficult game for the Storm, because the 10th-placed Raiders desperately need a win, but anything other than a Storm victory would still be a shock.

The two teams are well apart on the competition table for good reason. Melbourne rarely slip out of gear, while Canberra are their own worst enemies.