The Newtown Jets are the coolest club in rugby league. Rock stars sing cover versions of their team song. Their supporters have cool black beards and wear cool retro clothes.

And their home ground’s local boozer has gone from shady blood-hole of back-bar knuckle-men to that coolest of inner-city hang-outs, the gastro pub.

If you’d told Tommy Raudonikis the Henson Park Hotel would one day serve Nasi Goreng with grilled pork belly, acar pickles, banana chilli and tapioca crackers he’d have called you a fool and donged you on the bonce.

Newtown’s home ground, Henson Park, is largely the same as it’s always been – that being a chunk of 1947.

The King George V Memorial Grandstand – over which NFL player Manfred Moore once threw a football – is like a big concrete barn.

You can buy a sausage sandwich and a tin of beer. A car park rings the field, spectators watch in cars like people at drive-in movies. Local fans live in renovated terraces that were once just about slums, now worth more than Brisbane McMansions.

Newtown’s major artery King Street is like the Greenwich Village of Sydney. Yet you’ll see as many Jets t-shirts as those sporting Che Guevara.

Newtown may be known as the alternative art-hippy capital of Australia, but it’s cool to follow the Jets.

The Newtown ‘Bluebags’ were the first club admitted into the NSWRL on January 8, 1908. Club official Glen ‘Bumper’ Dwyer reckons “playing for Newtown is a bit different”.

“We’re a feeder for Cronulla, as the likes of Mounties are for the Raiders and Blacktown Workers will be for Manly. But there’s a lot of pride in the blue jumper. Players have a real feel for the history. We’re the oldest club in Australia.” 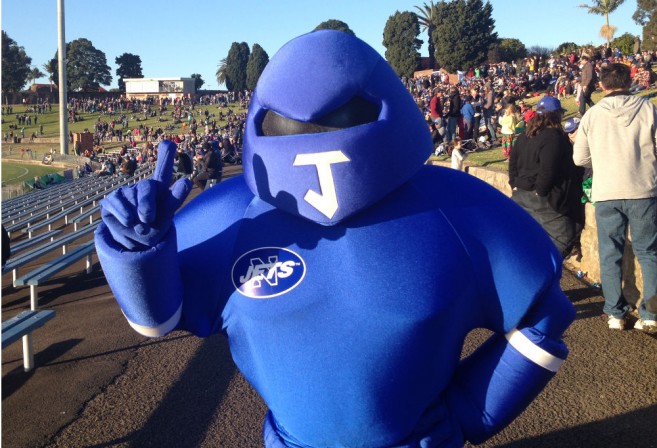 And then there’s this Saturday’s ‘Footy, Food, and Beer Festival’ run by the excellently named Music and Booze Company, for which they’ll attract nearly 5000 fans.

For a footy club that plays in NSW Cup and is effectively reserve grade, they’re big numbers.

I went to Reunion Day last year, and it was a cracking day out. Kenny Wilson was there, he captained the club in its last first grade match, a 9-6 win over Canberra on August 27, 1983 at Orana Park, Campbelltown.

Former lock Neil ‘Bing’ Pringle was there along with 147-game prop Doug Kemister. Phil ‘Whatsapacketa’ Sigsworth was there, a man who shares the coolest nickname in footy with Knights man ‘Waltzing’ Matt Hilder.

The old boys from the 1996 Metropolitan Cup premiership were there along with Bob Carnegie, who captained the club from 1970-72 and played for Sydney Colts versus Great Britain at Endeavour Field in 1970.

So there you go.

And if you do go – and a festival of food, beer and footy would appear as good a reason as any – you should find some grassy space on the northern end and settle in for some sunny winter afternoon gold.

The grass tips will be tinged with flecks of gold.

The Jets will be welcomed onto the park, as they always are, with their brilliant team song, ‘Newtown’.

Thirteen men all dressed in blue / Look out ’cause they’re coming through / Newtown – Newtown.

Ricky May wrote it in 1972. Punk rockers Frenzal Rhomb rip it off today. Tim Freedman of the Whitlams sang it at the club’s centenary dinner.

The footy is not quite elite level NRL pro footy. But it’s still pretty bloody good. There’ll be guys with NRL games. Young kids on the up. Old boys still bashing heads.

According to Dwyer there are nearly 40 players spread across 16 NRL clubs who have played with Newtown. There are more in UK Super League.

According to Dwyer, Newtown “aims to remain a competitive and proactive club in the second-tier level of Australian rugby league”.

Could they ever come back? Doubtful. But there’s a place for them where they are. And it’s pretty cool.