Memories from the legendary career of Nick Riewoldt

Nick Riewoldt is retiring, but he may well have wanted to play on and couldn’t. It happens here and there in footy, where the brain is stronger than the late-30s body, but was that the case with Riewoldt?

Riewoldt has left quite a few memories even for non-Saints fans like me, especially during the Ross Lyon turn of the decade when the Saints brought the press and squeezed their opponents into oblivion.

As an athletic, disciplined captain of St Kilda, he both personified the gritty style and had the skill that his teammates lacked to rise above it.

I’ve admired him and hated him. I certainly think the game is losing something without him, more than the loss of most other players.

I don’t believe we should glorify the past at the expense of the present, but I had hoped Riewoldt would continue forever and ever. I wanted him to defy time, and age, and in 2016 it seemed he was doing that.

He was continuing to play useful and sometimes inspired football long after his mates had all fallen away, surrounded by a different bunch of kids. While the world changed, Riewoldt was rising above the physics of the body’s wear, and providing a living link to times already forgotten, like the last Civil War veteran.

I see Riewoldt as the last of his kind, a Mr. St Kilda that is no longer possible in the free agency age. Lenny Hayes and Brendan Goddard both played a superhuman 2010 grand final, and were St Kilda for a day. But Goddard left and Hayes didn’t last as long as Riewoldt.

Riewoldt, as captain and a key forward, was also the figurehead, the representation of a club in a way only perhaps seen with Wayne Carey and E.J. Whitten. You could have a conversation about the similarly retiring Luke Hodge, but Hodge was surrounded by others like him so did not stand out as much.

Riewoldt’s forced retirement goes back to entire questions on what is a club? This is not on St Kilda, because this phenomenon is universal now – Brent Harvey should have played until Kingdom Come.

But, if Riewoldt is expendable – and we asked ourselves this last year with Sam Mitchell – then a club is no longer about history, identity, deep emotions and fraught love. A club is just a revolving door of the next talent, who will come and possibly in a few years will leave. Riewoldt should have been an exception.

By default, the abiding memories of St Kilda this century are from easily-obtained grand final DVD’s. Neither went Riewoldt’s way.

The first grand final against Geelong was a monsoonal, dark day that caused the ball to slip through Riewoldt’s usually sure grasp and annulled him, which given his superlative other two finals in 2009 against Collingwood and the Bulldogs – almost certainly cost St Kilda the premiership.

Apart from the weather, St Kilda beat themselves, they blew it. The most you can say about Geelong, more a neutral entity that day, is that they at least finished the better.

With the Cats closing fast, an isolated St Kilda break at 67-65 saw the Premiership wobble and topple on a Milne centre into the goalsquare and 43 years distilled into one second over whether Riewoldt’s hands could close around a pigskin and hold it. An eight-point lead on a fumbling day would have been St Kilda’s premiership. But Geelong’s defenders arrived and crashed his arms.

Riewoldt talked about throwing his dirty boots in the corner of his apartment in dejection that night and immediately leaving Australia to get it all out of his head. Then he came home, saw the boots in the exact same place, and it all came flooding back.

A year later was a type of redemption for team and player, even though St Kilda were not able to win. St Kilda, on Hayes’ and Goddard’s back, wrung every possible ounce of their limited ability to set up a six-point lead against a far superior team in Collingwood.

This time, the sun was ablaze and unlike the rain of 09, it was St Kilda’s own playing style that for the second time turned the grand final into a fumbling, congested scrap.

Riewoldt wasn’t huge in this game either, but was inspirational here and there. Was it only coincidence that of the 36 players camped around the ball, it was he who picked up the ball and sent it tumbling miraculously towards goal, where the last bounce again deceived St Kilda and Maxwell smothered on the line? Or was it greatness? 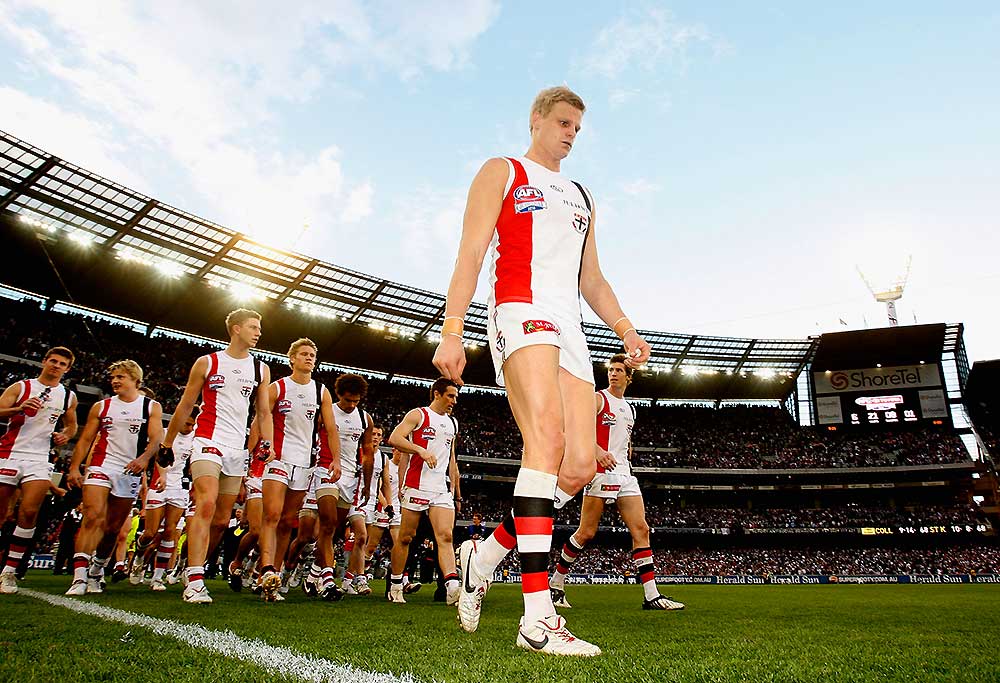 There were two minutes left and Collingwood’s vaunted full-ground press were defending a one-point lead. How could St Kilda get the ball down? Riewoldt. He flew across the pack and took an incredible mark. He booted it, Hayes booted it, Milne missed it and the game was tied.

All Western Bulldogs supporters like myself are filthy about the 2009 St Kilda-Bulldogs preliminary final, but the 2016 Premiership is of course, a balm for us that Riewoldt will unfortunately never receive as a player.

The Bulldogs sweated a four goals to three halftime lead against one of the single greatest one-year teams in AFL history. An entire half of gut-busting effort was all wiped out by an umpire who watched Brian Lake perform the usual pre-bounce bumping and gave Riewoldt a free kick for it in front of goal, without a third-quarter bounce.

I’m not sure whether to blame Riewoldt for the injustice or not. He went down easily enough. Then at the end he rubbed it in with the two last, match-winning goals with St Kilda’s virtually only two attacks of the last quarter. I’m choking on my own bile, as The Simpsons would say.

A few years later I saw Riewoldt stand over one of our fallen defenders, lording it over him with the Bulldogs down and out as a team in 2012, and I momentarily hated his guts. He had a gamesmanship in him that was again revealed only a month ago when he faked the 50-metre penalty that won the game against Fremantle.

I remember Nick Riewoldt as a young guy, fun and nice and emotional. I remember watching The Footy Show and they asked him what sort of tasks were involved with being an AFL footballer. “Make my bed, clean my room,” he replied, laughing.

During Round 1, 2005, the dying juggernaut of Brisbane had one last hurrah, defeating the superior Saints while Mal Michael and the Scotts repeatedly bumped him off the ball on his injured shoulder. Riewoldt was sitting on the bench after that and in tears.

Men drink and fight! But these days there are moments and articles about AFL footballers crying all the time. Maybe Riewoldt was the one who began to make it an acceptable practice for men.

There was a sense that night that it was a setback, but that St Kilda and Riewoldt were still at the beginning of a journey and things were optimistic.

Twelve years later, that trip is now over.