Moneyball is a 2011 sports drama. It revolves around the true story of Oakland Athletics General Manager Billy Beane and assistant Peter Brand, a Yale economist, who revolt against traditional baseball logic and build a team of ragtag misfits based off mathematical algorithm.

It proved to be a home run.

Its usage has bordered upon excessive and frivolous, coming to encompasses transfer policies which don’t come close to the true heart of what Michael Lewis describes in his renowned book, Moneyball: The Art of Winning an Unfair Game.

I wouldn’t describe Brisbane Roar’s transfer policy this off-season as Moneyball-esque, it is a gamble and built for the now. Potentially, for a new era.

Massimo Maccarone is a 38-year-old striker, the journey-man striker shapes as a throwback to a bygone era of old-fashioned hold-up play who feasts by poaching in the six-yard box. He has good pedigree with Middlesbrough and Palermo in his past alumni, however, turning 38 in September, one must wonder how many minutes Brisbane will get out of him.

Is it enough to be impactful?

Fahid Ben Khalfallah is well known among the A-League faithful, awarded Melbourne Victory’s Player of the season in his debut year. He seems a replacement for Roar Idol Thomas Broich, yet at 34, much the same as Maccarone, there is a question of fitness and minutes.

If both players cannot playout matches occasionally, are they re-signed to the bench as impact players?

Corey Gameiro once had Australia’s football community in the palm of his hand, he had talent in abundance and shaped as the next big thing. Gameiro arrives in Brisbane, entering his fourth club after a career plagued by injuries which have stalled his progress.

Apparently, Brisbane staff are impressed with his conditioning with all things considered, yet in the back of everyone’s minds must be the knowledge that this is a big risk.

Given all three are on one-year deals, two are ageing and one is on the comeback trail, it feels like Aloisi has banked on success this year, with these risks being calculated he is hoping to find value where others cannot.

This has the hallmarks of a short-term plan. It’s a brave move and could force a change of philosophy. 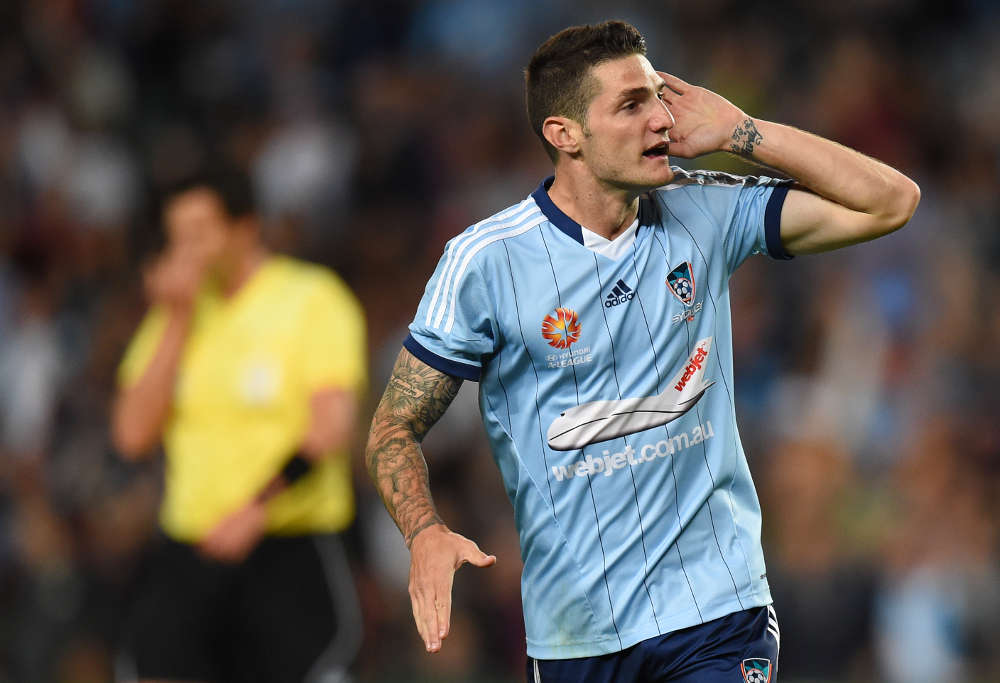 Since the halcyon days of Ange Postecoglou, Brisbane has assembled itself in its various iterations, under a 4-3-3 formation with an underlying desire to pass the ball and the play a “pure” game.

Now with McLaren and Borrello in Europe and Thomas Broich retired, Brisbane may not have the speed it needs to counter attack or play a front three with wide-players.

Ben Khalfallah offers Aloisi a wide option, yet his strengths lie in playing incisive passes and dead ball specialities rather than breakneck speed. Both Gameiro and Maccarone are versatile attacking players, however, are more suited to playing centrally as is Nicholas D’Agostino.

John Aloisi is certainly blessed with firepower, which could see a shift towards a two-striker system, potentially a 4-1-2-1-2, allowing Brisbane to highlight their strength in central midfield and use their hoard of strikers.

Potentially a slight variation of a front three could be in vogue, with the two wingers shifting inwards to play behind a central striker, more of a 4-3-2-1, compensating for the lack of wide players and utilising Brisbane’s plethora of strikers.

Assumedly Brisbane would have to sacrifice its counter attack and revert to a more patient controlled style of game reminiscent of the 2019-2012 ‘Roarcelona’.

If there is something we can agree on, it’s that Brisbane will pose one of the fascinating stories of the upcoming season, having taken a chance on its signings and the possibility of a change marking a new era.

Brisbane is all in for season 2017/18, whether they hit the jackpot remains to be seen.