Late on Monday night, Rodney Eade was informed that his services were no longer required at Metricon Stadium.

It wasn’t until Tuesday morning that the decision was made public, after which Eade decided to stand down from his post immediately, handing over the clipboard to caretaker Dean Solomon for the final three matches of the year.

The decision has come as no surprise given the Suns’ dismal season to date, in which it has won just six matches and currently sit in 15th place on the ladder ahead of their Round 21 clash against the Brisbane Lions at the Gabba.

The six wins accrued so far this year adds to the four matches (plus one draw) they won in 2015, and six last year. All up, Eade leaves the Gold Coast with 16 wins and a draw from 63 matches, a percentage of just over 26 per cent.

There were many factors behind the dismal winning percentage, one of which includes a horror spate of injuries the veteran coach was faced with the moment he was appointed Suns coach three years ago.

He succeeded foundation coach Guy McKenna, who was sacked at the end of the 2014 season despite the club achieving its best ever season, winning ten matches (out of 22) and finishing 12th on the ladder.

The 12th-place finish, which followed a wooden spoon, a 17th-place and 14th-place finish in their first three years respectively, led many to believe that the Suns would beat their expansion rivals, the GWS Giants, to a finals berth first.

The Suns were well on its way to reaching September for the first time, until captain and reigning Brownlow Medallist Gary Ablett Jr suffered a serious shoulder injury in a match against Collingwood midway through the season.

By that point, the club was eighth on the ladder with nine wins from fifteen matches, but they would win just once more (against the eventual wooden spooners, St Kilda) for the rest of the season and drop to 12th place.

The club’s inability to win matches without Ablett on the field was primarily one of the reasons behind McKenna’s sacking.

Looking back now, it’s fair to say that the club made a mistake in dismissing McKenna, as he was never given enough time to prove that he could coach the team to regular victories while Ablett was injured.

And one will also wonder how the Suns would eventually have fared had Ablett not suffered that shoulder injury against the Pies.

Being the reigning Brownlow Medallist, and right at the peak of his powers at the time, his ongoing presence could’ve played a factor in the Suns playing finals for the first time.

Instead, his absence voided the club of any confidence going forward and McKenna was eventually made to pay the price for the club’s poor finish to the 2014 season.

Expectations were raised when Rodney Eade, who had a track record of turning the Sydney Swans and Western Bulldogs around during his tenures at both clubs, was appointed the Suns’ second head coach. 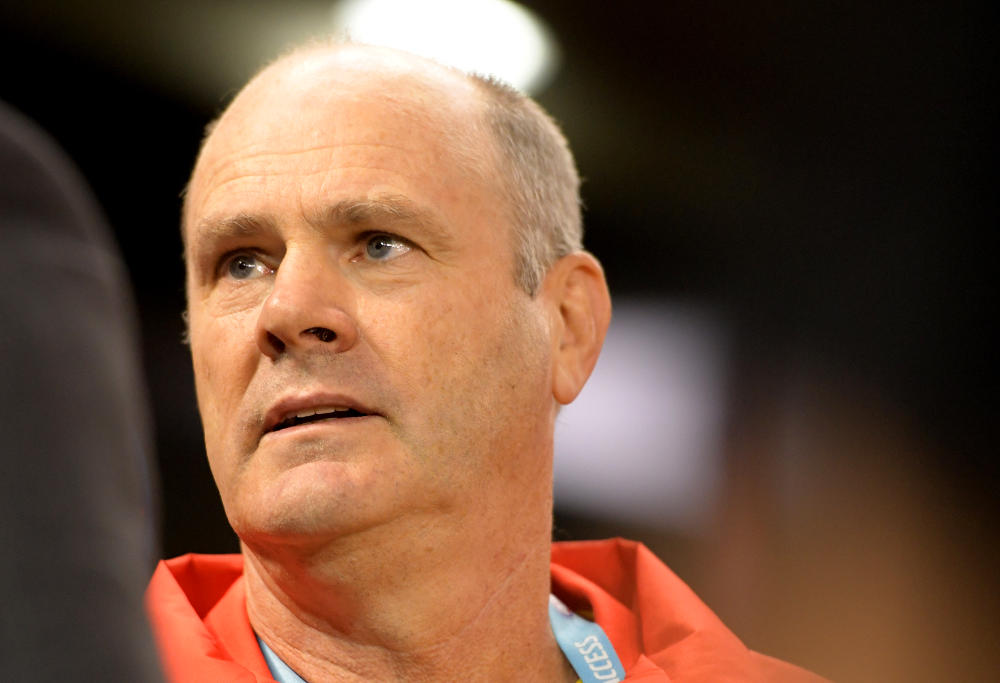 Little did he know that he would be faced with so many issues during his time as Suns coach.

This included, among others, a horror injury toll, off-field issues which led to the departures of foundation players Charlie Dixon and Harley Bennell at the end of the 2015 season, outdated training facilities and speculation surrounding Gary Ablett Jr’s future.

One of the first gambles the veteran coach made was rushing Ablett back for the side’s first-round clash against Melbourne at the MCG in 2015.

Sensing the occasion, the Dees targeted Ablett at every possible opportunity, sending Jack Viney to tag him for the match. A bone-crunching tackle from the now co-captain would set the tone for a dirty afternoon for the Suns, and perhaps Eade’s tenure as the club’s coach.

Eade said after the match that it was “just a bad day for Ablett” while also saying that he had to reconsider where the club was at going forward.

They promised to bounce back the following week against St Kilda at home, but instead served up more disappointment as they went down to the previous year’s wooden spooners by 28 points.

Further losses to the Geelong Cats and GWS Giants, both on the road and on either side of a six-day break, left them with an 0-4 record after as many rounds.

However, they would hit back the following week, defeating the Brisbane Lions by 64 points with Dixon kicking six goals.

They would only win three more matches, as well as register one draw against the West Coast Eagles, en route to a 16th-place finish.

It was then a major cleanout of the club began, with Dixon and Harley Bennell both being traded to Port Adelaide and Fremantle following issues surrounding drinking and recreational drug use respectively.

Many of us were then made to believe the club had finally grown up and were starting to fulfill their promise of reaching the finals for the first time.

But all the hard work the club put in over the off-season would start to fall apart in a controversial QClash in Round 4, where Steven May cleaned up Stefan Martin during the second quarter and was subsequently sent straight to the AFL judiciary where he later copped a five-match suspension.

From that point the Suns would never recover and by season’s end they would finish 15th with six wins, but not before Gary Ablett Jr suffered yet another serious shoulder injury in the second QClash in Round 16.

It was the same shoulder he had reconstructed following that fateful match against Collingwood in 2014, but it was a different injury he suffered altogether.

Ablett returned for this year’s season opener against the Brisbane Lions, which, despite the Suns starting as heavy favourites, lost by two points.

They then thought they had a chance against the GWS Giants the following week, after the 2016 preliminary finalists copped the biggest loss of any club in Round 1 when it lost to the Adelaide Crows by 56 points at the Oval.

The Suns should have struck a psychological blow by saying the Giants would have been scarred from that heavy defeat, while also talking up their chances of victory given it was the smallest loser from Round 1.

But they were terribly mistaken in more ways than one, and ended up on the wrong side of a 102-point thrashing, after which Gary Ablett Jr copped all sorts of criticism from the media for his poor personal performance.

A recent arrival at the club, Michael Barlow, then challenged the players to bounce back the following week against Hawthorn, and that’s exactly what they did, thrashing the powerhouse club by a record 86 points.

They would then defeat Carlton, the West Coast Eagles, Hawthorn (again) and North Melbourne to revive their finals hopes, before five straight losses, the latest of them a 23-point loss to Fremantle, spelled the end of Rodney Eade’s failed tenure as coach.

The decision to move Eade on comes as Collingwood looks set to reappoint Nathan Buckley as coach, with reports he is set to be granted a twelve-month contract extension, thus putting him out of the Suns’ reach.

But while he may not have achieved the success many were expecting him to, there is no doubt that he has made his mark on the players, in particular Steven May and Tom Lynch, who this year became co-captains of the club.

The Suns’ backward trajectory under Eade contrasts to the path their expansion rivals, the GWS Giants, took under Leon Cameron, who served as an assistant coach under Eade at the Western Bulldogs between 2005 and 2010 and served one year as coach-in-waiting under Kevin Sheedy in 2013.

After taking over from Sheedy as Giants coach at the end of 2013, Cameron mapped out a long-term path to success which could culminate in the Giants taking out this year’s premiership.

The team gradually improved year on year, winning six matches in 2014, eleven in 2015 and sixteen (plus one final) last year. This year, they have won twelve matches with three rounds still to play in the regular season, and will contest finals for the second straight year. 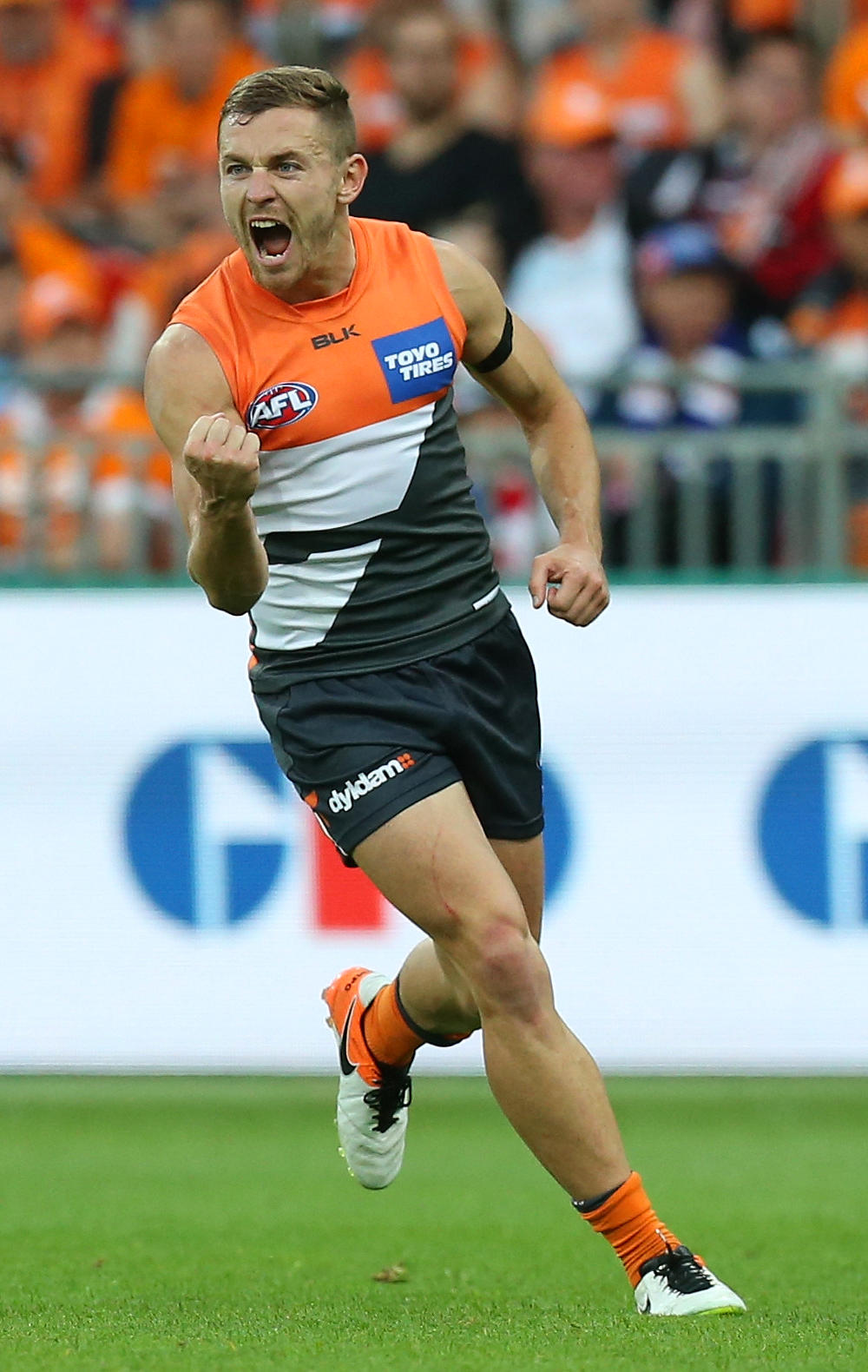 Unlike the Suns, who relied too heavily on Gary Ablett to do the heavy lifting, the Giants spread the load from their talented midfield to the forward line, which led to them scoring quite heavily in 2016.

But while their scoring is well down this year, they are still getting the job done in most matches, whether it’d be winning convincingly or falling over the line as they have done a few times this year.

Back on topic now, and assistant coach Dean Solomon will assume duties on an interim basis for the final three matches of the season, as the search begins in earnest for the Suns’ third full-time coach.

Among the favourites to fill the post full-time include John Barker, who assumed caretaker duties at Carlton after Mick Malthouse was sacked halfway through the 2015 season, Stuart Dew, a highly-respected assistant coach at the Sydney Swans, and former Carlton coach Brett Ratten.

Both Barker and Drew have graduated to the fourth level of the AFL Coaches’ Accreditation Program, while Ratten will have no doubt gained a load of experience under Alastair Clarkson at Hawthorn after being moved on as Carlton coach at the end of 2012.

But one thing will be very clear – while the next Gold Coast Suns coach will without a doubt inherit a talented playing list, he will have his work cut out trying to take them up to the next level, and that is reaching the finals.