It seems unkind, and a little cheap, to label Joe Caletti and Matt McKay’s performances in their 5-1 FFA Cup loss to the Melbourne Victory as lightweight, considering the modest stature of the two.

But against Mark Milligan and Leigh Broxham – with the latter no man-mountain, mind you – the Brisbane central pairing flickered in and out of relevance, mere wispy versions of what Roar manager John Aloisi would have hoped they would be.

Brisbane are currently assessing the fallout from that loss, one that, although technically in pre-season, should not be dismissed simply as the result of match bluntness.

The pallid Roar helpfully highlighted – enhanced, even – the splendid state of the Victory’s current group, arranged as it coherently is around a robust trunk of players. As far as central talent, from the midfield to the attacking line, the Melbourne Victory might have the deepest and most versatile group in the league.

It starts with Milligan, whose return has been met appropriately with stern rejoicing; just as Milligan’s role in the national team seems to be ascending to its deserved place of importance, so has he seized a key – albeit different – role in the A-League’s best-supported club.

Last season, the central midfield pairing – Broxham and Carl Valeri, Broxham and Oli Bozanic, and occasionally Rashid Mahazi sprinkled in there too – was, whatever iteration, a little limited. Valeri is a bruising presence defensively, with Broxham a scurrying rover, but neither have the passing range of Milligan.

Broxham and Milligan – or Valeri and Milligan – ought to be one of the most defensively sound midfield pairings next season, but will, thanks to Milligan, be equipped with a sudden and devastating ability to launch a direct raid on the opposition final third.

Pairing Milligan with a dedicated defensive partner – as was evidenced in the Cup win over the Roar – also frees Milligan up considerably to roam forward. This is where his role differs significantly from his national team duties.

Milligan might be a first-choice centre back for Ange Postecoglou, and his tackling nous and passing are certainly invaluable to the Socceroos’ defence and defensive midfield, but it was a refreshing sight to see Milligan pushing up to the edge of the penalty area against Brisbane. His shooting and vision will only bring more potency out of Besart Berisha and the other attackers.

Speaking of the attack, ahead of and branching off the Milligan-Broxham trunk, James Troisi, Kosta Barbarouses and Mitch Austin form a hugely athletic supporting three, arranged threateningly around Berisha.

The loss of Marco Rojas has been mitigated without much fuss by Barbarouses’ return, and his speed and willingness to jet with intent behind the opposition line of defence will mean the Victory won’t mourn Rojas’ absence for too long.

In a way, Austin and Barbarouses open up a dimension Rojas was perhaps not as well-suited for; everything indicates the Victory will play a forceful inside-out system this season, with the flanking speedsters playing a key, off-the-ball role. Milligan can pass from the deep central midfield, and Troisi is best used finding fleeting pockets of central space, collecting the ball in them, and turning and accelerating.

Last season, Troisi also seemed at his best when linking up with a deep-dropping Berisha, playing quick one-twos and bursting through. Berisha is not well-equipped to run in behind, as much as his second goal against the Roar speaks to the contrary. His lethal finishing is what make him so valuable, as well as his stellar hold-up play. 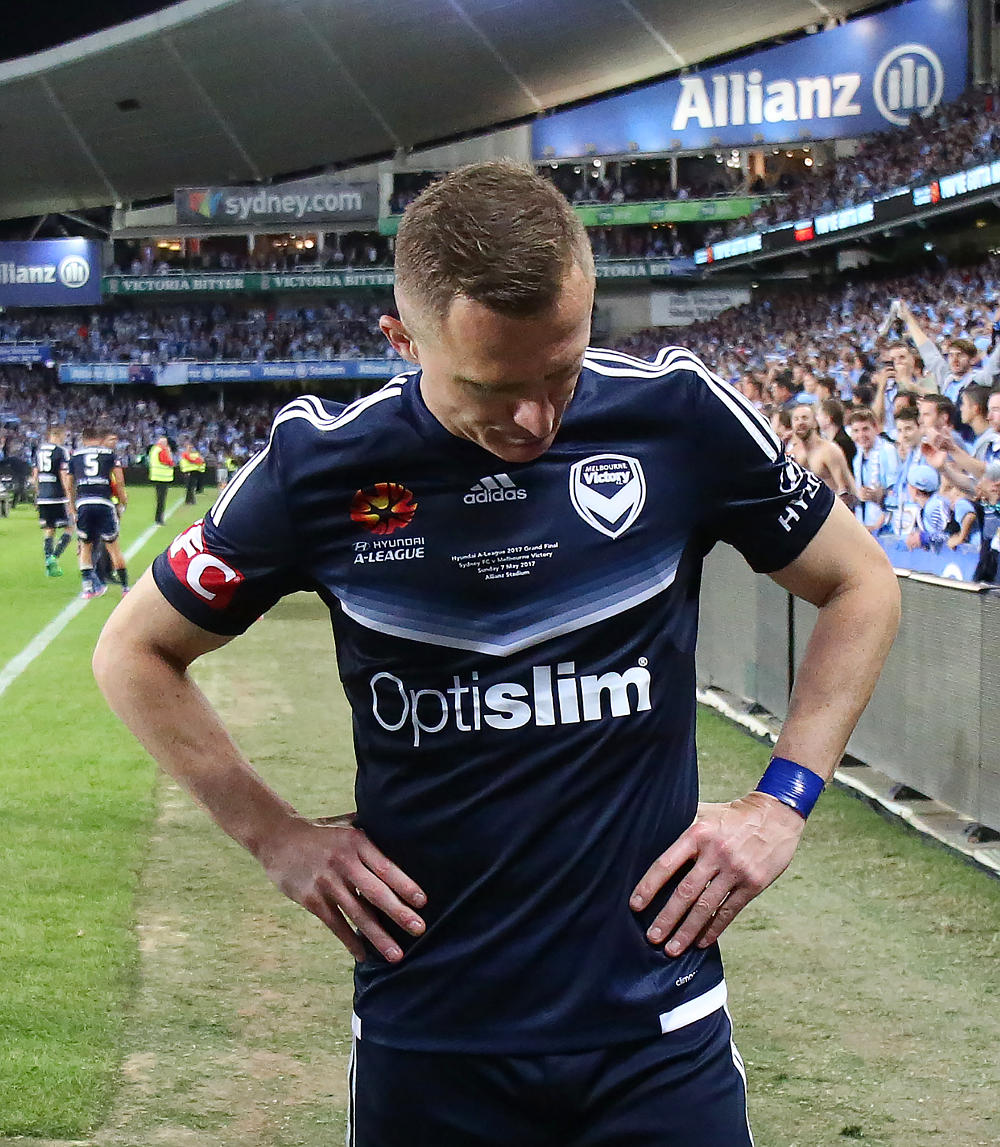 So, essentially, the formula is this: Milligan and Broxham win the battle in midfield, and shunt the ball up the middle to Troisi. He combines with Berisha, and as the opposition defence collapse on Troisi and Berisha, the two wingers dart in behind, drawing attention and personnel.

Passes are made from the inside-out, and as Barbarouses speeds away toward the byline, Berisha trots up, ready to predate on a cross, with Troisi lurking on the edge of the area ready to shoot. Progress up the pitch is not made up against the sidelines; like the silhouette of a grand tree, the main thrust of progress occurs in the middle, creating a solid trunk that branches out into spindly barbs at the top end.

The Roar further illuminated by playing the opposite way, clipping balls up the wing, from full back to winger, with most of the off-ball runs being made up the middle. It did not work well, with the other new Victory signing, Rhys Williams, dealing with most of the minimal threat created.

Often the full backs left their centre backs hopelessly exposed, pushing up too far and losing possession. It was a chastening night for Brisbane, and the wonderful consolation goal curled home by Petros Skapetis didn’t do enough to soothe the bruises Melbourne inflicted.

They were, admittedly, missing Luke DeVere and Avraam Papadopoulos, perhaps their two first choice centre backs. Still, they paled badly in the face of an engaged Victory side, that knew how they were meant to play, and executed the plan ruthlessly.

If this is the level they’re thrumming along at in the pre-season, then Victory fans will be justified in raising their expectations.

The belated re-signing of Troisi, and the excellent acquisition of Milligan, are both gourmet garnishes on the Victory’s typical seasonal serving of aggressive, organised football. It all makes for a very pleasing pre-season of preparation.