Sonny Bill Williams is one of the most polarising athletes on the planet. Most people have an opinion about him and it’s usually either love him or hate him, there’s very little middle ground.

In New Zealand the haters probably outnumber the lovers, if the comments in articles about Sonny Bill Williams are anything to go by. In the comments section of any article the real experts are usually repeating the same three things ad nauseam: ‘Money-Hungry’, ‘Overrated’, ‘Attention-Seeker’.

But is SBW actually any of those things? With his imminent return from a spell reflecting on his sins, it is probably an appropriate time to attempt to objectively assess whether SBW actually deserves his reputation. Let’s look at each of the three accusations in turn.

Money-hungry
While it is close to impossible to know the amounts of most of the contracts rugby players sign, it is usually possible to estimate and get somewhere close.

In 2008 SBW was playing for the Canterbury Bulldogs and was in the second year of a five year contract worth about $2.5m, or about $500,000 per year. This is not a vast amount, but not many league players were doing better, as the salary cap precluded massive sums being paid.

He walked out. This was probably the biggest mistake of his life and it prompted the nickname of Money Bill Williams or $BW, and the hatred of thousands of people, as he headed to Toulon to play rugby.

But was it all about money? SBW was unproven in rugby union and it is highly unlikely that he was paid more than his Bulldogs contract of $500,000 per year. That would have been a massive figure for an unproven rugby player.

Plus he had to pay $750,000 to get out of the Bulldogs contract, and had to borrow the money from Anthony Mundine; so clearly Toulon were not prepared to shell out too much for their new star. It’s likely that SBW took the first pay cut of his career.

This all changed two years later once SBW had shown his class in his new sport and Toulon’s new offer came in at an estimated $2m per year for three years, plus a guarantee of the French #12 jersey. This would have made him the world’s highest paid rugby player.

But SBW turned down the big French bucks and took up the New Zealand Rugby Union offer of $550,000 for a chance at making the All Blacks. In doing so, he took the second big paycut of his career. Money Bill is looking a little shaky.

By 2012 he had established himself in the All Blacks and was well beyond the $550,000 original contract, probably one of the highest paid All Blacks on closer to $1m per year, when he decided to honour a handshake agreement with Nick Politis, chairman of the Sydney Roosters and return to rugby league.

His return came after the Roosters had almost filled their playing roster and had very little left under the salary cap. It is likely that SBW took one of the lowest paid slots in the team, for around $100,000 for the season. For the third major move of his career, SBW took a massive paycut. 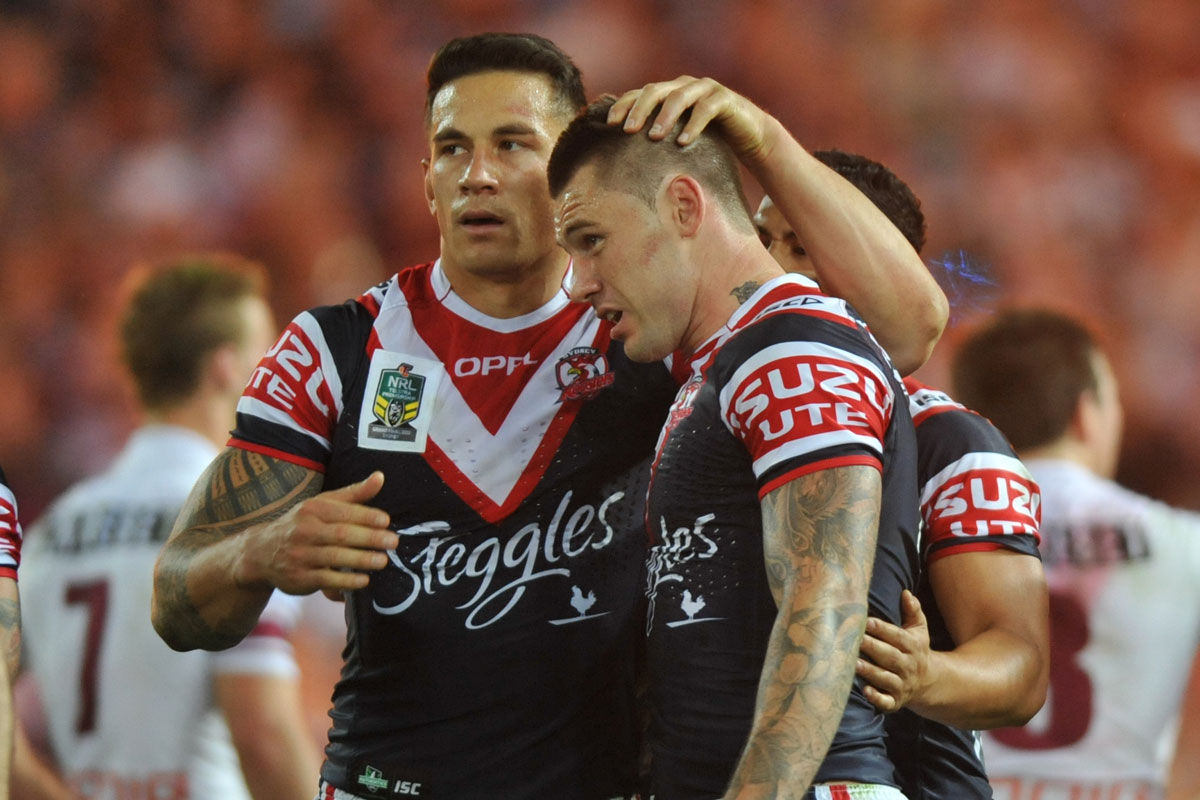 Of course he did manage to afford the return to league paycut by taking his only major career pay rise for a new contract, when he played several rugby games in Japan for probably somewhere between $1m and $2m.

After his first year with the Roosters he decided to stay and it is likely that the Roosters were able to increase his pay for the 2014 season, probably closer to the $500,000 per season mark.

But this was too much for SBW who decided to return to the standard New Zealand Rugby Union contract of $550,000 and rejoin the Chiefs. It is pretty certain that the Roosters were increasing their offer to keep him, but the paycut this time was probably only a small one.

SBW then decided to play Sevens to try to make the Olympic team, in spite of the fact that Sevens players are paid far less than All Blacks. Money Bill took his fifth, and so far final, career paycut.

So in spite of half the rugby world considering Money Bill/$BW to be all about the cash, it seems that virtually none of the career choices he has made have actually made him more money.

Could it actually be that he is not particularly motivated by money?

Overrated
At least half of the rugby world’s ‘real experts’ consider SBW to be overrated. It’s never completely clear who actually overrates him, but it’s most likely the stupid coaches who keep picking him.

SBW is often considered one of the better sportsmen on the planet, with his ability to reach the top in two sports, three if you count sevens, and pretty close to the top in a fourth – boxing.

That record alone should mean you’d have to be comparing him to Jesse Owens, Emil Zatopek, Don Bradman, Jim Thorpe, Carl Lewis and Michael Jordan etc to overrate him. SBW hasn’t dominated his sports like these athletes but he’s also not usually compared to such legends.

But as a rugby or league player it’s hard to overrate him.

The haters say that he has never been first choice for the All Blacks. But they forget that in 2012 he had pushed out Ma’a Nonu and was the first choice All Black 12 in the season’s first three tests against Ireland.

When Conrad Smith was injured and Nonu was brought back for the Tri-Nations, Nonu played 13, leaving the first choice 12, SBW in place.

The following year, 2013, he was named the world’s best rugby league player.

He is also first choice 12 for the All Blacks this year, in spite of limited play due to Achilles tendon injury. When he is available, the other All Black midfield backs are competing for the 13 jersey.

SBW also appears to be one of these rare players who makes those around him play better. When he arrived at the Chiefs they were usually close to the playoffs, a difficult team to play, but lacking the consistency required to win championships. In his first season he brought the necessary consistency of performance which the Chiefs had been lacking and was hugely influential as they won their first title.

His work ethic and example as a trainer, inspires those around him to train harder and reach for higher goals. When he arrived at the Roosters they were not considered title contenders.

But the Roosters team, almost to a man, credit SBW with raising the standard of everyone around him and driving them to winning the grand final in 2013 and the minor premiership in 2014.

He pioneered a new style of play in rugby, the offload in the tackle. Before SBW this was a rare thing, but today, every rugby playing kid offloads as a matter of course.

He has the ability to turn games in the favour of his team with moments of magic. Everyone recalls the two offloads that led to Nonu’s try in the 2015 Rugby World Cup final, but in their first game of that tournament, the All Blacks were looking shaky against a fired up Argentina, until SBW came on and turned the game the All Blacks’ way. As a finisher in 2015 he was sublime.

SBW is clearly not overrated by his coaches, such as Sir Graham Henry, Steve Hansen and Wayne Smith, who most people accept are pretty good judges of a rugby player’s talents.

In fact, it would be hard to find a coach in any rugby team worldwide who would not cut off a vital part of his anatomy to have SBW in his team. It seems to be only the ‘real experts’ who think he’s overrated.

Attention-Seeker
SBW comes from humble Samoan roots. It is not part of the culture to seek the limelight. While there are thousands of articles written about the legend that is SBW, you have to ask yourself, how many times have you actually seen him interviewed? The answer is barely ever.

Does this really fit the image of an attention seeker? Surely he should be pushing himself forward at every opportunity?

Every gossip mag in two countries would open the vault for an exclusive story or interview with SBW, but I’d be interested if anyone can even come up with one such feature article. Even his wedding was a quiet and private affair. There was no sale of exclusive wedding photos, in spite of the six-figure sums that gossip mags would have paid for this.

Journalists are interested in SBW because of his celebrity status; because of his skills on the rugby field and because of his polarising influence on the public. An article about SBW is likely to be read by both the lovers and the haters, therefore is worth writing. (Why else do you think I wrote this?)

But you could never say that SBW has sought the attention that has been showered on him. He lives quietly, loves his family and since his big mistake, walking out on the Bulldogs, which followed some drunken nights and a shagging incident in a toilet cubicle, when has SBW been in the news for doing something which you wouldn’t want your kids to hear about?

For ten years, SBW has been a role model for kids for more than just his rugby skills. He keeps out of the limelight, except when he runs out onto a rugby field, and for many years has been, and remains today, one of the best rugby players in the game.

Sure he’s changed sports a few times. Like many people, I played six different sports at varying levels, and no one ever complained when I switched. Like most people, I’ve also changed jobs a few times and no one thought worse of me. Why should it be different for a top sportsman?

If he wants to do different things, why are the ‘real experts’ pointing fingers? Surely they would do better to watch with interest to see how this magnificent sportsman does in his next challenge? After all, SBW is an entertainer, one of the best ever seen on a rugby field.

Why would you deny yourself the joy of watching such an entertainer, by demeaning his achievements, or calling him money-hungry, overrated or attention-seeking.

Sonny Bill Williams is none of these things. Enjoy the ride!