Why a rush defence will not upset the All Blacks

A rush defence will not undo the All Blacks in the Rugby Championship – and it didn’t for the Lions series.

Well, that’s a big statement so best start backing it up.

Many a parallel has been drawn between the Andy Farrell rush defence and the series outcome but the match evidence suggests a confusion between causality and correlation.

The rush defence seen in the Crusader, Maori and Chiefs games, quite simply, did not exist in the three Tests.

Test One
There will be zero disagreement Kiwi coach Steve Hansen picked apart the Farrell rush defence with ease. Clinical was the word I found most often used. The All Blacks attacked the narrow channels, won the gain-line with ease.

Rearrange the following in a sentence; barrel, shooting, fish – The rush defence provided no issues at all.

Test Two
I will admit assessing uneven variables is way past my pay grade, but a surprising outcome was that, even with a seven man pack for the best part of an hour, New Zealand still dominated possession, territory and all of the set piece stats.

The Lions forwards competed at the gain line for the first 20 minutes of this Test but that was largely it for any extended period in this series.

Nick Bishop showed that even with 14 men, the All Blacks were still creating space in the wider channels but not getting the ball there. Kieran Read got way too conservative for too long when down to 14.

Test Three
For this game Hansen moved his point of attack wider of the ruck, as well attacking in close again, and with great success.

Ngani Laumape ran rampant, Owen Farrell missed five tackles and, for 50 minutes until Jerome Kaino went to the bin, the All Blacks made the gain line in close and went through the Lions backline almost at will.

The nine line breaks the All Blacks made this day would normally be enough to put a Test away but their execution was way below standard.

Ardie Savea dropped a sitter with the line open, Jordie Barrett threw a forward pass when Savea had an unopposed stroll. Laumape, Sam Cane and Barrett all spilled the ball in the red zone with the defensive line going backwards.

The execution was extremely poor, but it simply was not a function of any rush pattern.

Add Beauden Barrett’s poor grubber kick for Read with the Lions backfield in disarray in Test two, and the execution errors really start to add up and get costly. This one, once again, not forced by any semblance of rushing defence.

While the following clip’s focus is on Beauden Barrett, there is enough in here to show that the All Blacks were in the back of the Lions almost at will.

Any actual highlights clip of the Test demonstrates this at even greater length.

Here are six things that made it the perfect storm for the All Blacks – almost literally.

1. It rained – a lot
Let’s compare these games to New Zealand performances in wet weather Tests.

While I am sure there are others, two spring to mind for me.

vs Australia in Sydney 2014 – score 12-12
I was at this game and it was miserable. A tight battle played on a soaked park in the rain and neither side managed to cross the chalk. Not sure I remember Ewen McKenzie being lauded for a magnificent defensive pattern despite New Zealand being kept try-less.

vs South Africa at Twickenham, 2015. Score 20-18
If you are looking for the best rush defence executed against the All Blacks in recent years then go and watch this game. New Zealand scored two tries from five line breaks in an absolute soaking slugfest this night.

Fair to say, if you want to restrict the New Zealand attack then the weather gods will play a greater role in the outcome than any defensive system.

2. A quite magnificent Lions scramble defence
This was the real key to staying in the games.

Whether Gatland selected his pacy back three with this is mind is unknown, but this and the attitude displayed – Bishop calls it ‘unity of purpose’ – were the major contributors to the Lions defensive effort across Tests two and three.

I have never seen a composite side with as much effort as we saw on this tour, they got up off the ground, covered each other, chased everything and never surrendered.

Jonathan Davies for me was brilliant in this regard, as well as timing his shooting out of the line in isolation superbly. The injuries to Billy Vunipola and Stuart Hogg that elevated Taulupe Faletau and Liam Williams ended up being fortunate bonuses to the Lions’ defensive effort.

3. You don’t want to play against 15 All Blacks all the time
Self-inflicted to a large degree, but the simple fact of the matter is there were 240 minutes of rugby in this series and New Zealand played with 14 men for 27 per cent of the time.

You aren’t winning games or series being undermanned for a full quarter of the minutes, or more importantly, for more than 40 per cent of the last two Tests.

4. Missing best in class players
Not sure there is too much argument in declaring Dan Coles and Ben Smith as the best in their positions, while Ryan Crotty wouldn’t be too far away if selecting a World XV. Coles remains out of Bledisloe One.

In isolation, this is something New Zealand should be able to cover, but in the perfect storm, it was a major contributing factor to the lack of execution.

5. Goal kicking
Every New Zealander holds their breath every time Beauden Barrett stands over a goal kick. This was always going to cost a Test eventually and it very nearly cost a series.

Farrell, on the other hand, was great in the clutch and confirmed himself as the world’s best goal kicker.

6. You need the rub of the refereeing green
Without relitigating the actual decisions, it would be fair to say the big calls favoured the Lions in the series.

Ever seen ten kickable penalties awarded in a Test without a yellow card?

Let’s say it, to tip up the All Blacks it really helps if Romain Garces somewhere in the immediate vicinity.

Is it a coincidence that he was the appointment for the first Bledisloe Test before withdrawing through injury?

Any single one of these items would normally be absorbed by what remains a quality New Zealand side, and to not lose the series against a very good Lions team in face of this perfect storm is actually quite impressive. 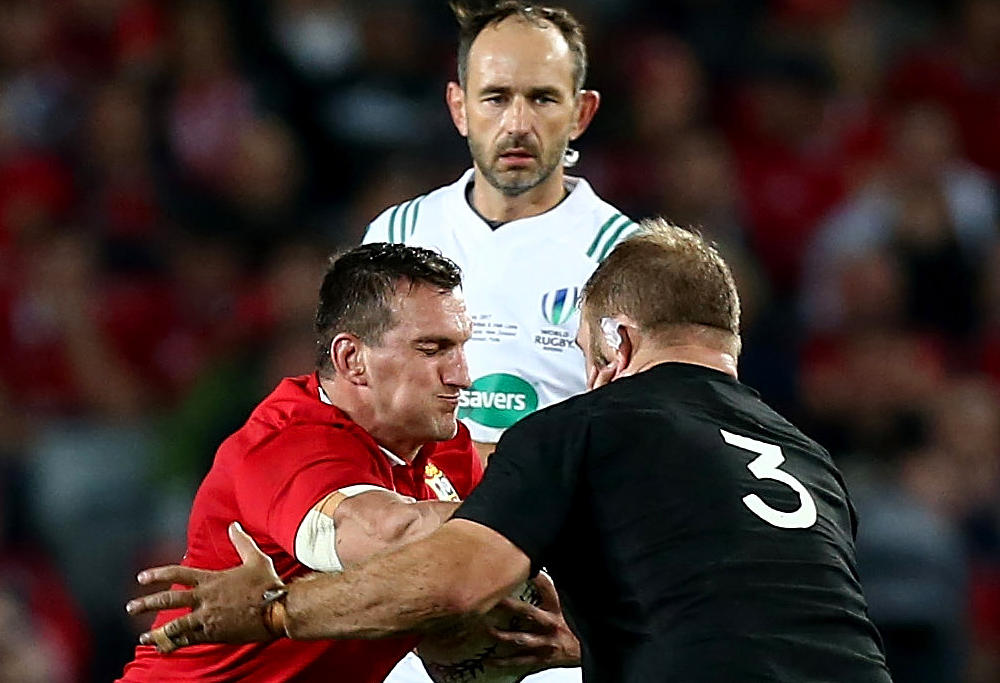 The series, however, threw up two interesting things you don’t need to compete with the All Blacks.

Firstly, you don’t need to dominate the scoreboard. Over 240 minutes of rugby, the British and Irish Lions led for a sum total of three minutes.

Secondly, you don’t need parity in the forwards – something I’m surprised did not garner more comment or interest.

We were told the Lions would dominate set pieces, generate penalties, kick for touch and bully the All Blacks into submission, but nothing could have been further from the truth.

The Lions scrum, based on the Saracens model, was disappointing at best, toothless at worst. I’m not sure if Owen Franks has ever had an easier three weeks.

New Zealand scrummed at 100 per cent across the three Tests generating points from both penalties and try from this set piece. The Lions scrummed at 86 per cent.

Lineouts were really interesting. Across the series, New Zealand were at 81 per cent and the Lions 83 per cent, but there is a nice little quirk in the stats.

Once Maro Itoje was introduced in Tests two and three, New Zealand improved and the Lions deteriorated, with the numbers at 95 per cent versus 76 per cent.

I would consider Itoje to be easily the best own ball jumper in world rugby right now, but it appears he was countered with relative ease.

The series is now consigned to history, and now the Championship starts, a wounded NZ, a revitalised South Africa, a super fit Australia and the ever mercurial Argentina. Bring it on.