Both Micheal Cheika and Michael Hooper expressed frustrations during the week at the seemingly defeatist attitude which existed in the public towards the Wallabies and their ambitions to end the All Blacks’ Bledisloe supremacy.

All the wash-up from Wallabies vs All Blacks Bledisloe 1:
» LORD: Rugby is an 80-minute game
» Match report: All Blacks wallop Wallabies
» What changes should Australia make for Bledisloe 2?
» Vote in our DIY Wallabies player ratings
» WATCH: Highlights from Bledisloe 1
» WATCH: Michael Cheika’s post game comments
» Re-live the match with our live blog

Saturday night showed that the public’s scepticism was more than warranted. This is a bad rugby team. And the All Blacks are a good rugby team.

I wrote a piece on Friday which highlighted five key areas that the Wallabies needed to nail if they were to stand any chance against the All Blacks. The number one point among those was defensive organisation. The Wallabies flunked that test. Badly.

As expected, the Wallabies began the game with the defensive strategy employed by the Waratahs this season under the tutelage of now Wallabies’ defence coach Nathan Grey – with nominated ball rushers pressuring the first and second receivers with the defensive line behind sliding laterally to cover.

Much like the Waratahs this season, that strategy was picked apart at will by the All Blacks as the Wallabies’ nominated rushers continually slipped off tackles.

For all the criticism of Michael Cheika and his selections and tactics – much of it warranted – the fact that he can’t rely on seasoned professional rugby players to make basic tackles tells you everything about where this team and rugby in this country is at.

Let’s be clear, many of these ‘professionals’ are so in name only. The Wallabies made 57 tackles in the first half and missed 35.

‘Professional’ rugby players don’t fall off 60 per cent of tackles. That is an embarrassing statistic and the All Blacks looked almost embarrassed at the ease with which they were strolling to their 40-6 half time lead.

Whatever line speed the Wallabies defenders had displayed in the first half had well and truly disappeared by the 25th minute, and from that point the All Blacks were free to do as they pleased. 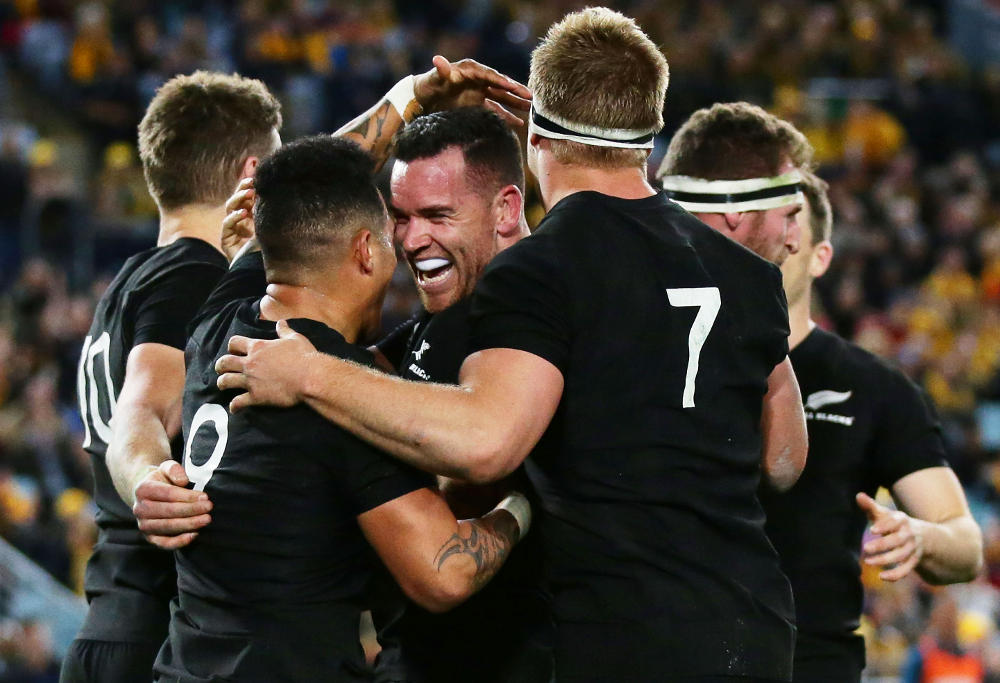 The British and Irish Lions had success against the All Blacks by wrapping up the ball in contact, which cuts down their ability to offload and play up-tempo.

The All Blacks hardly needed to offload against the retreating Wallabies defensive line, as offloads are only required when a tackle is actually being made.

The Wallabies saved some face in the second half, but make no mistake, those were ‘garbage time’ scores; the All Blacks had long since checked out of the game and were mentally boarding the plane home. The job was done.

The other key area in which the Wallabies fluffed their lines was ball security. The All Blacks will destroy you if you turn the ball over unexpectedly, and the Wallabies gave them plenty of opportunities to show off their prowess at the counter-attacking game.

Both Rieko Ioane and Damian McKenzie scored tries immediately on the back of basic handling errors from the Wallabies.

The fact that the best fifteen players that Australia can muster contain half a dozen who can’t accurately throw or successfully catch a pass in the face of pressure is another damning indictment on the state of the game here.

Cheika cannot remain free of scrutiny, despite his players’ failings, as his selection of Samu Kerevi at outside centre proved to be the defensive disaster many had predicted it to be, while the ‘mobile’ Ned Hannigan looked decidedly lightweight at Bledisloe Cup level.

Hannigan tried hard, but simply providing an effective lineout jumper option is not sufficient grounds for international selection. You cannot carry passengers at this level.

Those questioning the retiring Stephen Moore’s selection in a side supposedly in the process of building for the 2019 World Cup will not have been placated by a performance which saw him contribute next to nothing in either attack or defence. In fact the only tackle of note he made resulted in a penalty for not releasing the tackled player.

One shining light for the Wallabies was the performance of Kurtley Beale, who looked sharp with ball in hand. Bernard Foley has enjoyed a long run in the 10 jersey for Australia in recent years, partly due to the fact that nobody has been able to mount a solid enough case to replace him. Beale will now offer a genuine alternative should Cheika lose faith with the misfiring Foley.

The Wallabies will head to Dunedin next weekend for mission impossible and will no doubt be on the end of another drubbing, and it is becoming harder and harder to even visualise what the end product of Cheika’s plan looks like.

Whatever that plan may be, rest assured that it will never reach fruition while the Wallabies continue to defend like turnstiles.