Almost a month to the day after requesting to be traded, Kyrie Irving is on the move.

Cleveland’s All Star point guard is headed to Boston, with the Cavs getting fellow All Star Isaiah Thomas, Jae Crowder, Ante Zizic and Brooklyn’s 2018 first-round pick in return.

There’s no doubt that Irving is an offensive star, a lights-out three-point shooter (40.1% last season) and one of the best and most creative finishers at the rim (60.3% from within three feet).

While his playmaking has come into question, he’ll now have a chance to be the primary playmaker on a team, so maybe he’ll show some previously unsighted set-up skills.

And while there’s not much hope for defensive development at this stage, he should at least replace Thomas’ work on that end (if only because of the six extra inches he has to work with).

Irving is younger, contracted for longer and potentially better than the man he replaces.

Crowder’s production can largely be offset by up-and-comers Jaylen Brown and Jayson Tatum, Zizic is an unknown quantity arriving from Europe this season, and Brooklyn’s pick was always likely to be used at the trade table rather than the draft.

Celtics fans were growing restless waiting for GM Danny Ainge to cash in their trade assets, and Irving is likely the top guy they could have got at this stage.

Boston were already co-favourites in the East, alongside Cleveland, and with a proven playoff performer now arriving, this move should strengthen their position.

As for Cleveland, the deal walks the tightrope between short-term and long-term building perfectly.

With LeBron James a chance to leave after this coming season, the Cavs need to compete immediately, while also preparing for his possible departure. This trade does that.

Thomas is coming off a career-best season, in which he averaged a remarkably efficient 28.9 points per game (54.6 eFG%, 26.5 PER), and should replace much of Irving’s offence both off the dribble and off the ball.

While it is unlikely that Thomas will replicate his incredible season, he may benefit from a reduced role and more easy shots playing alongside LeBron.

And with his contract expiring after this season, the Cavs will have some degree of flexibility should LeBron pack up and head to LA.

Crowder will add some much-needed defensive toughness, and while Zizic is untried at NBA level, reports from Europe suggest he could play some handy minutes at the highest level.

The Brooklyn pick (likely in the top five of a loaded 2018 lottery) is a nice get. If LeBron stays, it can be cashed in at the trade table, but if he leaves it could provide a potential building block for the future.

Cleveland were in a tough spot when Irving asked for a trade, but it appears they have made the best out of a bad situation.

And in the immediate aftermath of yet another blockbuster this offseason, this feels like a rare win-win. 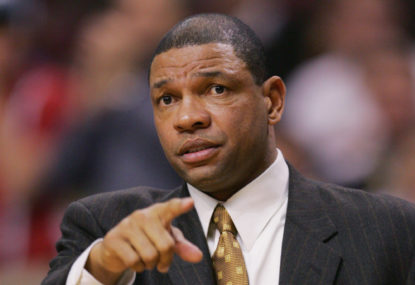