Conor McGregor will finally fight Floyd Mayweather this weekend. At last the battle will take a positive turn from the verbal to the physical.

The last few weeks have been spent with McGregor telling anyone that will listen that Floyd is scared and won’t last four rounds.

I admire his confidence if not his bombast.

Mayweather after all is no stranger to cheap arrogance either, although his record of 49-0 and 15 World titles across five weight divisions makes it somewhat easier to digest.

Regrettably, these displays of pathetic trash-talk are now the standard fare in the fight-game.

Maybe McGregor even believes this vocal narrative, or perhaps he does not?

It could even be that the estimated $100 million from ringsiders and global pay per view is not enough. The pantomime animosity and brouhaha needing to be ratcheted up an extra notch to glean another $1 million or so, from this charade.

Despite his protestations to the contrary, McGregor will not win. He won’t get remotely close, and even the old pugilistic idiom of a punchers chance feels relatively fanciful.

Fictional miracles have been known to happen on New York’s 34th Street but seldom within the harsh confines of a Las Vegas prize ring.

Just ask any gambler within a home-run of Saturday’s venue and they will attest to this.

Vegas, despite its garish razzamatazz, is after all the home of the hard luck story and the haunting “bad beat”. Across any given table or sports book on any random night, the familiar end game plays out in oxygen filled rooms to the rhythmic cacophony of blaring fruit machines.

The bout will take place at the recently constructed glass and steel edifice that is the T-Mobile Arena. A modern venue for a thoroughly modern event.

The word “contest” is deliberately omitted here as this will be anything but. Still, unlike those gamblers, when McGregor is done with his work on Saturday night and walks out into the stifling desert air; he will at least do so with his pockets stuffed with cash.

There are some small crumbs of comfort available to anyone perusing the local Sports Books. The 3/1 on offer for a McGregor victory is derisory to the point of being insulting. However, his loyal and hyped up fan-base may incorrectly see some value in this price. The better transaction concerns the 1/4 that can be found on a Mayweather victory.

This is still too short to offer any real riches to the casual punter but those with a substantial bankroll will in all probability dig deep into this one.

The betting markets are actually beginning to paint a fascinating picture.

Since the fight was announced the price on Floyd has been slashed in half, and there is a substantial trend towards McGregor. 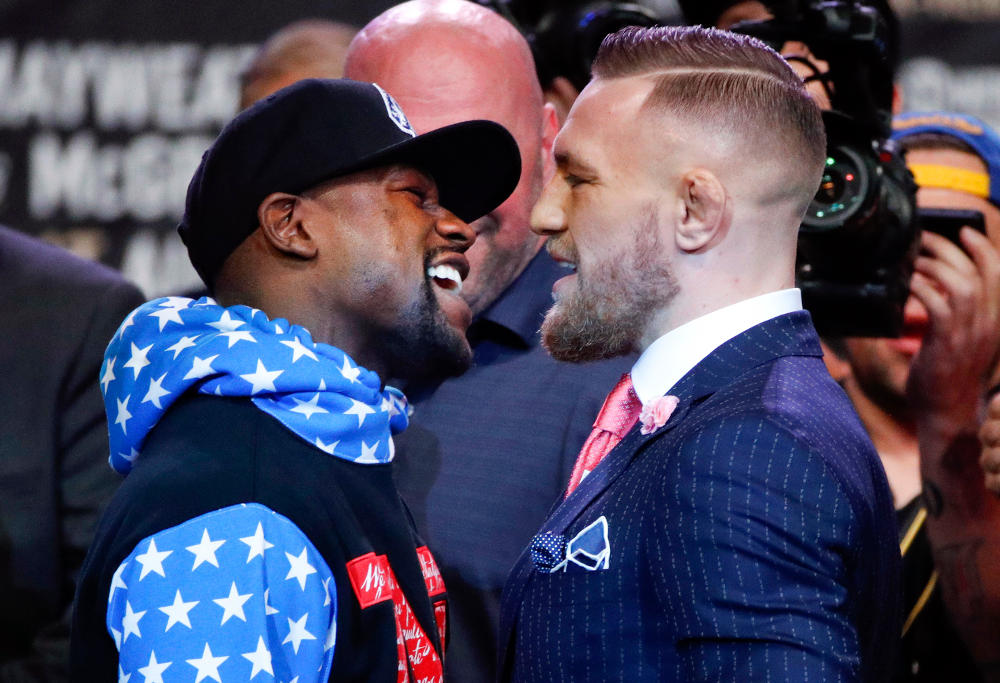 This is especially so after the recent announcement that special dispensation has been provided by the Nevada State Athletic Commission, for the usage of 8oz rather than 10oz gloves. This is seen as favourable to McGregor due to their closer proximity to his standard 4oz MMA gloves.

Although, considering the fact that Floyd has contested all but three of his 49 contests wearing 8oz gloves, it is hard to see it making too much of a difference.

It seems that the request may also have come from Mayweather which further negates the advantage theory. Boxing purists should view this dispensation with a certain level of circumspection and cynicism also, as it could be construed as yet another deviation from the mainstream into the sideshow.

The recent behaviour of Mayweather appears to have strayed from his normal well-trodden path of headache inducing self-confidence. In the past few weeks he has been quoted as saying “I am not the same fighter I was two years ago” and “if you look at everything on paper it leans towards McGregor.”

These are startling and uncharacteristic admissions from a man with Floyd’s epic self-confidence.

This is being treated by many as Maywether getting his excuses in early. A personal acknowledgment that father time has caught up with him and that he is shuffling out for one last mega pay-day.

Perhaps he has over egged his diminishing abilities and is about to get cooked. This is not necessarily inconceivable considering that he has now reached his forties and the tank must eventually run dry at some point.

Do not believe a word of it…

The opposite hypothesis can be readily explored and with it a different set of motivations uncovered. Floyd’s vocabulary does not contain words like: modesty, contrition, and doubt. His self-regard is such that should his powers be conceivably on the wane then he would be the last of all people to identify it.

If this were so, it would be beyond credence for a man like Mayweather to risk public humiliation by being upended against a boxing debutant. Even Floyd’s love of the dollar would not be sufficient for him to have his legacy traduced in such a manner.

“Money” Mayweather has two overriding ambitions. One is to notch up 50-0 and surpass the record of the legendary Rocky Marciano. The other is to make as much money as possible while doing it.

Conor McGregor provides the perfect equilibrium in terms of risk and reward trade of.

The powerful Irishman has an army of fans and the novelty bout will be sure to break PPV records.

The perfectness of the plan is that Floyd knows he can beat him tonight, tomorrow or any night of his choosing.

He is all too aware that the critics know that, along with a decent proportion of the potential audience. This explains his focus on talking McGregor up rather than his own abilities.

Most entertainingly he has recently intimated that he plans to go toe-to-toe with McGregor, which is clearly a ludicrous and blatant untruth. But all this guff helps to sell the fight and side-step attention away from the likely snore-fest that will ensue.

Perhaps, it mirrors some of the more outlandish theories. Those that speculate that Mayweather would be happy to lose and bank another $100 million rematch with Conor next year.

For the reasons outlined above it is impossible to believe that the proud champion and immense ego that is Floyd Mayweather would ever countenance such an outcome. The recommendation is to bury these thoughts along with some of the more outlandish Game of Thrones fan theories.

Boxers just do not win world titles on their professional debuts. Former Olympic Heavy-weight Gold medallist Pete Rademacher tried back in the 1950s and was battered into submission by Floyd Patterson. He did so, for a pittance of what McGregor is due to earn.

MMA, despite being an immensely tough sport is no preparation to take on one of the greatest defensive technicians of all-time.

In a personal sense Floyd is not an easy man to love or respect. But within the ring he is a staggeringly gifted exponent of what was once referred to as the manly art of self-defence.

The Pimpernel ability to hit and not be hit. These skills will be met with brute force on Sunday and they will triumph decisively.

As Damon Runyon once nearly said; ‘the fight may not always go to the five-time world champion against the untried debutant. But; the gambler should always bet that way.’