A midfield war under a glass ceiling: Sonny Bill Williams versus Kurtley Beale in Dunedin

It had been a dark, damp week. In the build-up to England’s contest against New Zealand back in December 2012, there had been a lot of self-questioning and doubt.

We had lost to Australia and South Africa in the previous two matches of the autumn series, and with the world champions looming on the horizon it promised to be a blackout.

But when I talked to head coach Stuart Lancaster during the course of that week, he insisted that the players were looking sharp in training. Minds were concentrated, all of the coaching and playing group were determined to prove that they were capable of something much, much better on the coming Saturday against the All Blacks.

Australian coach Michael Cheika probably felt something similar in the week before Saturday’s match against the same opponents in Dunedin. Cheika, his fellow coaches and the players would have known they were capable of more than they had shown in Sydney.

And on game day, they delivered a performance to be proud of – even if they didn’t get the result they wanted.

Such ‘peak performances’ come with a warning on the packet. They arise because of the privileged psychological position you’re in – backs to the wall, faced by the prospect of not just loss, but annihilation and a total loss of face. There is nowhere else to go and that gives you a vital mental edge. 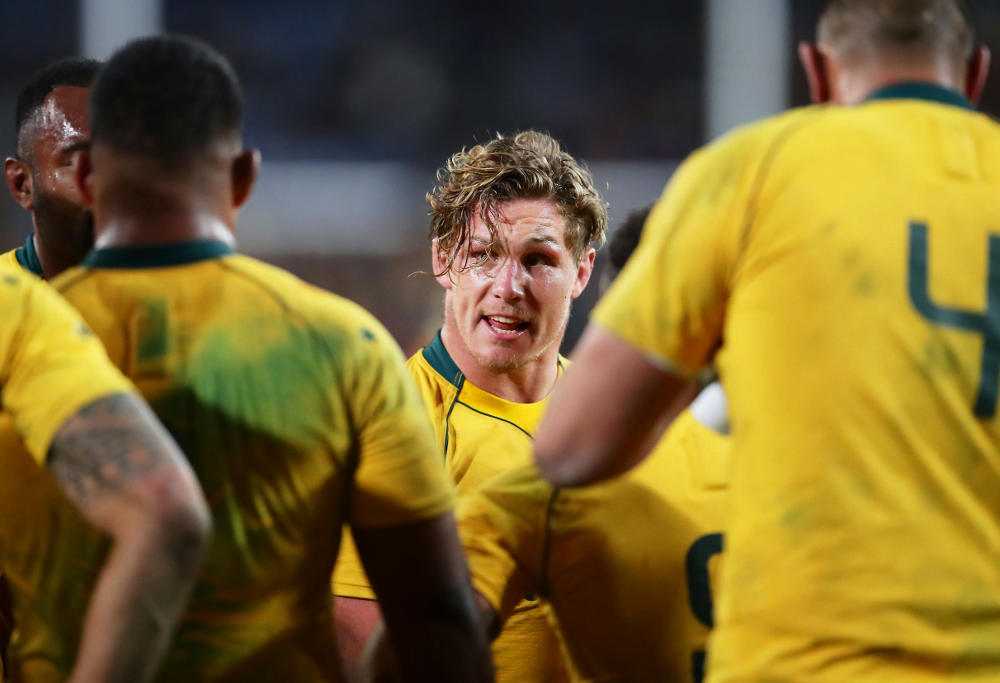 The aftermath following a peak performance is more important than the game itself. The peak you reach because of the special psychological circumstances does not represent in any way your ‘standard of performance’ – the standard you can reliably expect to maintain under ordinary conditions, and with the added burden of new expectation.

Back in 2012, England’s standard of performance gradually declined in the 2013 Six Nations, to the point where the 30-3 loss to Wales in the final game of the championship on March 16 was an accident waiting to happen. By that stage, the thread had been well and truly lost.

So the task for Michael Cheika now is how to incorporate the advances shown at Dunedin more permanently into a new, higher standard of performance, in the knowledge that he won’t be able to rely on the same set of psychological conditions arising for the rest of the Rugby Championship.

So many things went right for Australia at Dunedin. Apart from the scrum, which only achieved stability when Tatafu Polota-Nau and Sekope Kepu entered the second half fray, many players confounded expectation. Rob Simmons proved he is still most definitely international quality in the second row, Sean McMahon spiked criticisms of his lack of stature with a whale of a match in the back row, Will Genia proved he is not too old for this game at scrum-half.

Above all, Kurtley Beale proved he can defend in the front line and does not need to be hidden in set-piece defence. He not only stood up to Sonny Bill Williams, he won the midfield battle between the two number 12s hands-down to the extent that I believe the All Black selectors will fundamentally reassess the balance of their combination at 10, 12 and 13 for the remainder of the season.

Israel Folau’s intercept try in the first minute of the match set the tone on defence for the rest of the game.

When the Kiwi second receiver Damian McKenzie takes the ball at 0:15, the Wallaby line in front of him is solid and even. They are in good position to spring a defender out of the line and cut off the obvious long pass to the outside.

The key is Folau’s late movement from a deep position, defending behind Henry Speight and only breaking on the ball when McKenzie is committed to the pass.

The organization of the Wallaby defence in general showed more intelligence than previously. Remember this very flat, inflexible scrum set-up in the backfield that led to a 35th-minute try against Italy?

Compare that with this from Dunedin: 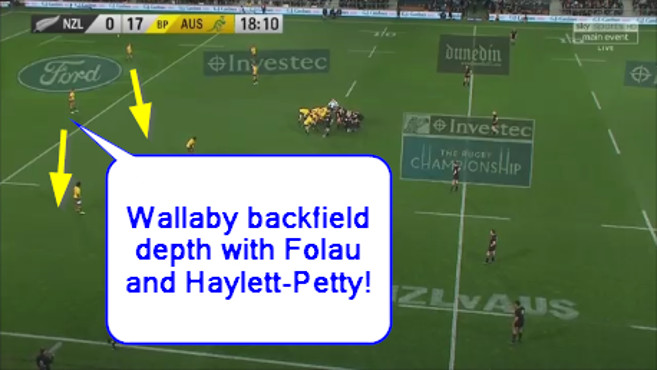 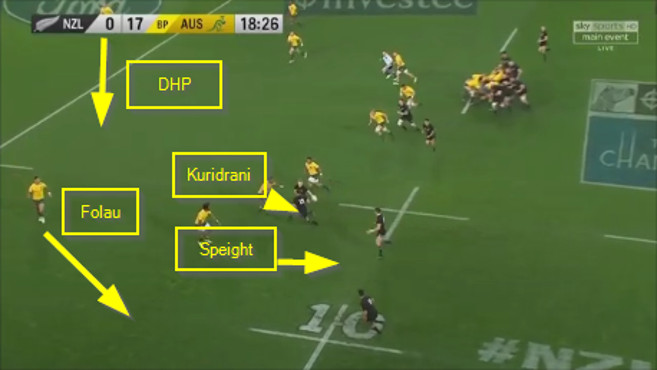 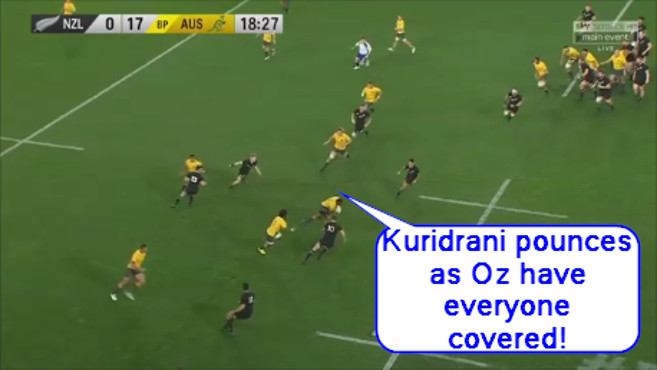 Even allowing for the scrum moving further towards midfield, there is an impressive depth and flexibility in the Australian backfield set-up against a flat New Zealand backline.

Folau is set deep in midfield opposite McKenzie and able to mirror his movements, while Dane Haylett-Petty is tucked in behind Beale out to the left and able to rotate into fullback.

When McKenzie makes his move to the Wallaby right, Folau and Haylett-Petty can both read the play and move towards the ball to cover the threat. The front-line defender Tevita Kuridrani times his ‘stop’ perfectly in front of McKenzie to force the broken play and a subsequent turnover. Australia have all the bases covered defensively. 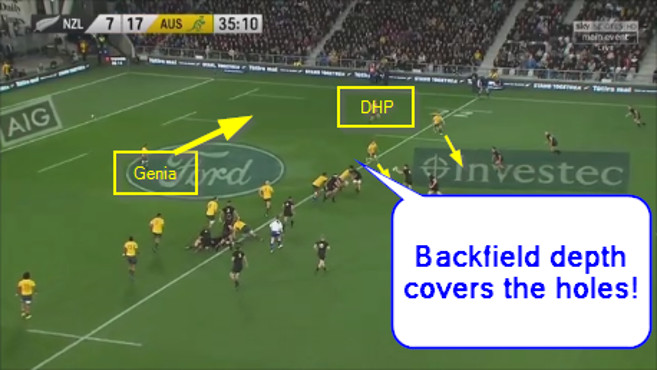 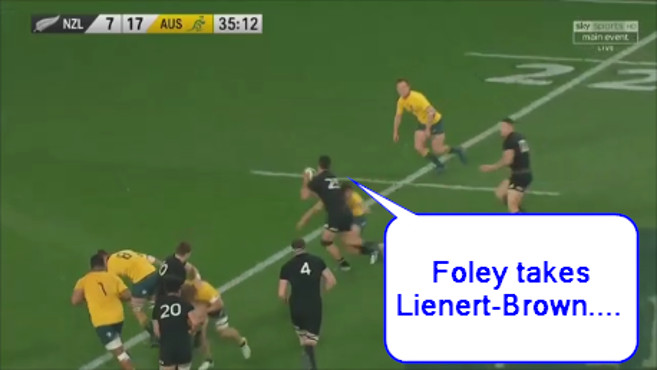 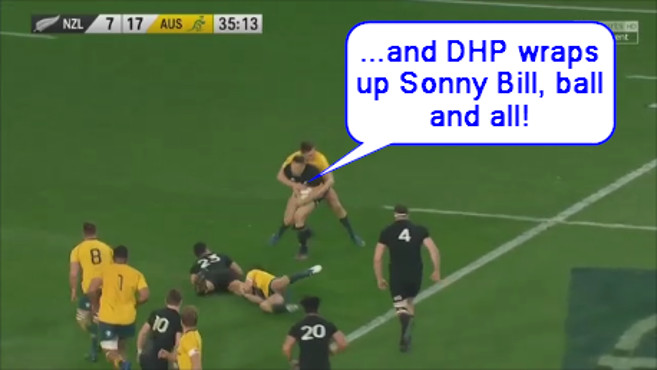 The All Blacks have run three phases out towards the same-way touchline from a lineout, but the real target area is on the other side.

As Beauden Barrett receives the ball, a dangerous gap has opened between the two Wallaby front-line defenders Michael Hooper (opposite Barrett) and Bernard Foley (on the 15m line).

The depth of the Wallaby backfield again proves to be the saviour. Haylett-Petty has the time and space to read the hole as it develops and follow Foley inside to wrap up Sonny Bill Williams.

Even when the Wallabies did give up a try from a scrum position almost identical to the first game in Sydney, they defended it correctly. In the highlight reel in the 61st minute, the Wallabies are in a man defence close to their own goal-line, with Haylett-Petty and Will Genia looking after Rieko Ioane on the short-side – there were three defenders stationed there at Sydney (Genia, Rona and Beale) when New Zealand scored on the other side of the set-piece.

Haylett-Petty also makes the right decision to come in and hit Beauden Barrett when he scoots around to the short-side, but unfortunately for the Wallabies, he cannot make the tackle on the New Zealand number ten to prevent him scoring.

The system worked, but the individual defender was unable to execute his role within it – in an admittedly difficult situation.

One of the major success stories of the Wallaby defence on the day was the neutralizing of Sonny Bill Williams. Australia clearly made a policy decision to take him high in the carry to prevent the offload, and as often as not they managed to do it with people defending in their typical positions: 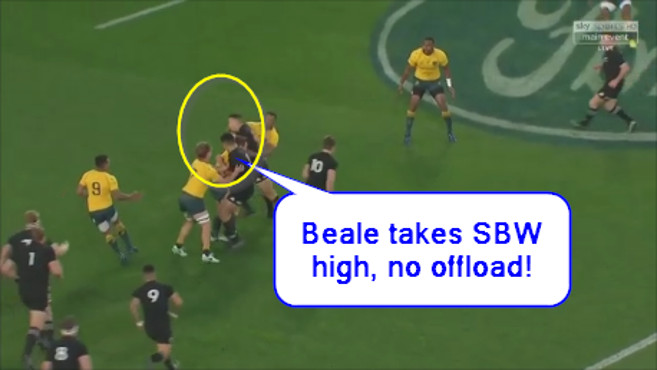 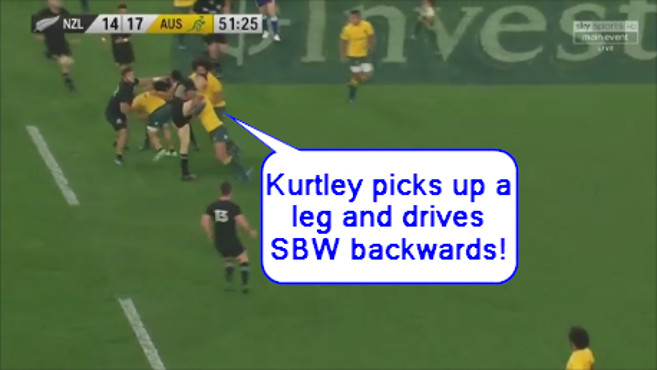 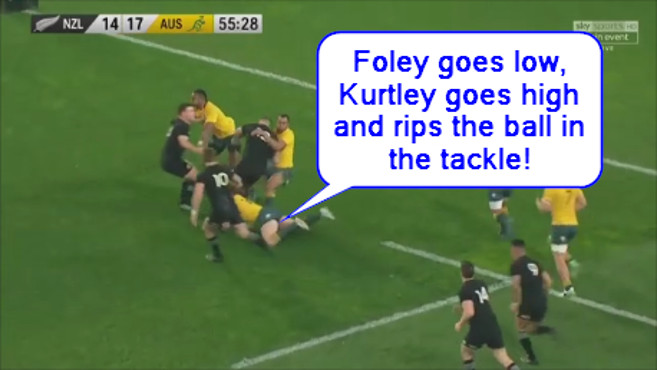 In the first example, the orthodox formation of Hooper at seven, Foley at ten and Beale at 12 forces a mistake by the All Black attack in the form of a forward pass between Barrett and Sonny Bill.

In the final instance from a scrum close to the Australian goal-line, Foley and Beale combined to not only stop Williams, but rip the ball off him in contact. In the course of the game, I counted five events where Sonny Bill turned over the ball in contact: 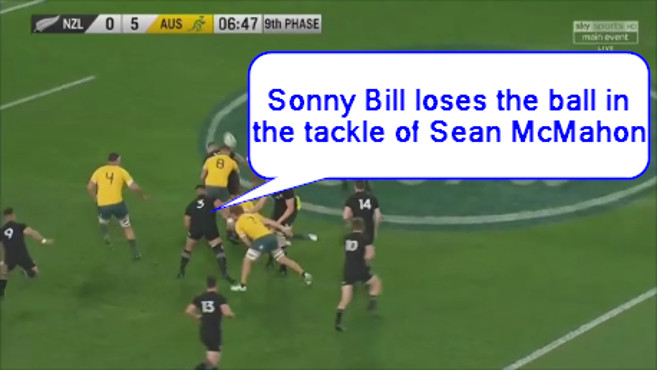 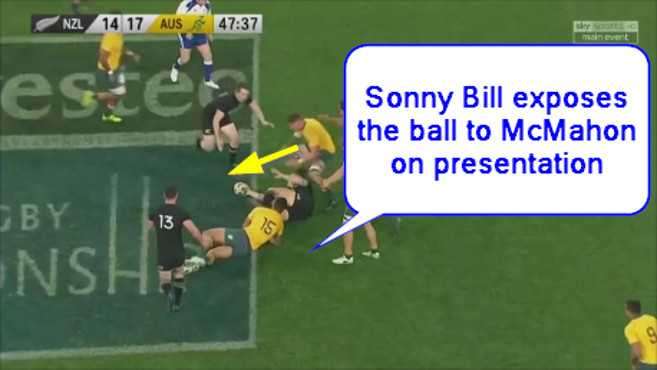 On both occasions, it is Wallaby number eight Sean McMahon who is either ripping the ball away in contact or robbing it on the ground with the ball exposed on presentation. In the second instance, Williams needed to make another roll on the ground before placing the ball in order to connect with his support.

Kurtley Beale also made another try-saving intervention near the Australian goal-line after the Wallaby front line had been broken on the previous phase: 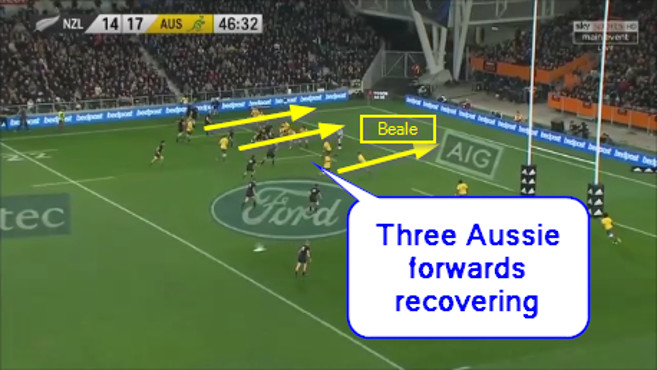 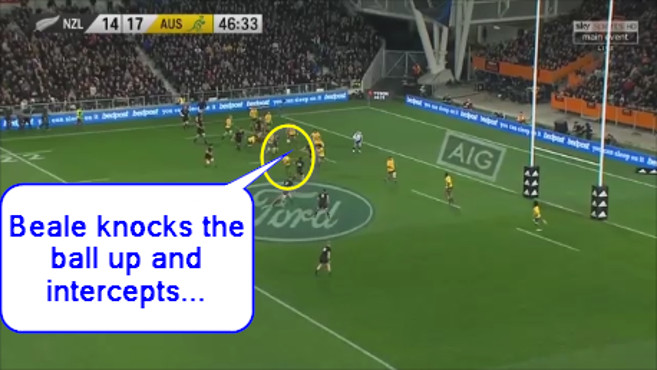 In the first frame, there are three Australian forwards still recovering towards their own line, and two backs just about on the turn in Kuridrani and Speight. Beale chooses the only real option to prevent a score, rushing forward to knock the ball up in the air and make the intercept.

Summary
The Wallabies will be feeling baffled after scoring five tries away from home against their most bitter rivals from across the Tasman and still coming away empty-handed.

But this peak performance will not become automatically the new standard of performance, even if it gives the promise of ‘what may be’ in future. That standard is far more likely to fall somewhere in between the level shown in the June series (and at Sydney) and the level in Dunedin.

The two Rugby Championship games against a resurgent South Africa will be particularly important in assessing the Wallabies’ real curve of improvement.

Defensive structures last Saturday were much improved, and Kurtley Beale and Bernard Foley demonstrated that they are capable of defending the 10/12 channel together without having to be hidden against a much bigger opponent.

I would be very surprised if the current All Black midfield of Beauden Barrett, Sonny Bill Williams and Ryan Crotty lasts to the end of the year as the first choice combination. It may not even last to the end of the Rugby Championship.

The end of Sonny Bill’s All Black career may well be hoving into view, with Crotty and Anton Lienert-Brown providing the centre partnership versus the Springboks and Pumas.